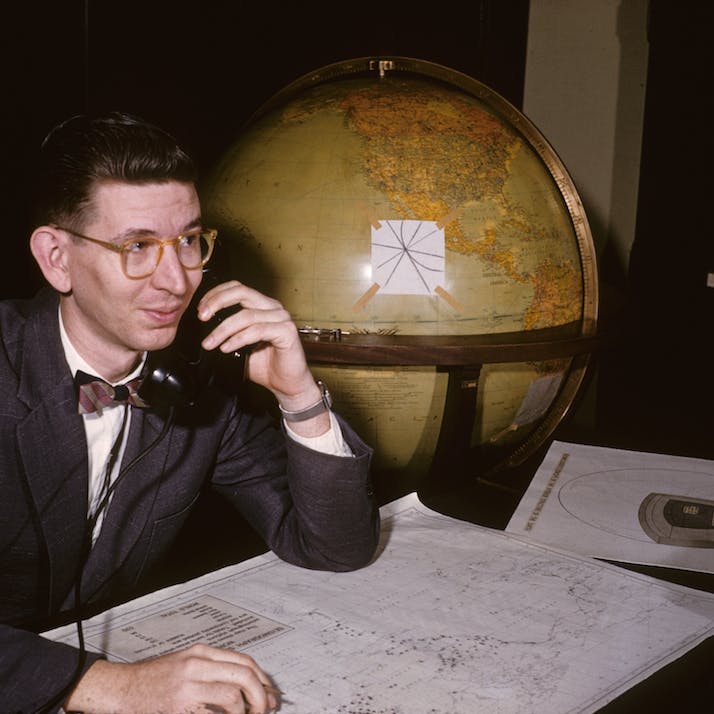 How to Debate Flat Earth Believers

Flat Earth believers are devoted advocates of the theory the earth is flat. Here’s advice on how to engage them.

After nearly a year of revelling in flat Earth articles, podcasts, and memes, I finally have my chance to talk to some “flatties” in the wild. The room is bunker-like; small, slightly tatty and buried beneath a London Premier Inn. There’s about fifteen people total, ready to roll.

It is about to be a very frustrating experience.

Why Do People Think the Earth Is Flat?

A growing number of people think the earth is flat. My curiosity was pricked by an article in The Economist. Since then, I’ve debated (or, more accurately, “debated”) many flat Earth believers. Here, I offer up some words of advice on how to steer a flat earth debate.

There’s only one other “globetard” in the room: An elderly woman who stays quiet throughout, except once to ask a question about where the edge of the earth is. I like her. During the questions, when she senses my annoyance, she’ll knowingly wink at me in solidarity. She’ll eventually walk out in apparent disgust. The debate itself is a mess. I never finish my fifteen-minute presentation. Constant interruptions are raised against points I’ve never made. No one takes the time to realize I’m fully acquainted with flat Earth literature. I try to advance a more sophisticated argument they’ve never considered before. Half the room never stops to listen to it. The other half never gets the chance to, what with the constant bickering.

The Flat Earth Discord in Society

Steer one: You are not going to change the mind of a convinced flat Earth believer. They’re irredeemably trapped by the assumptions they’ve made about the nature of the world. One famous flat Earther says flat Earthers have a 99 percent retention rate: Once you go flat, you don’t go back! I doubt serious statistical methods were deployed to arrive at that figure, but I’ve little doubt that the truth’s not far off. But this retention rate is only evidence of what it takes to be a flat Earther in the first place. If you are already prone to misunderstand the world to the extent required to believe the earth is flat, you won’t have the conceptual tools to ever realize your mistake. No wonder you never change your mind.

Given this, you should question whether it’s worth debating them. For any debate (whether it’s politics, religion or what to see at the cinema), you must ask, “Why bother?” Is it that the participants don’t know the truth and are trying to find it out? Are you hoping to convince the other side? Are you open to being convinced by them? Or are you just hoping to show how intelligent and bright and educated you are (i.e., show how big of a dick you can be)? Ask yourself why you’re bothering to debate given that the other side is never going to change their mind.

There’s a fiercely religious old lady: every word of the Bible is true; Lucifer is behind it all; Jesuits assassinate people. I never get a chance to tell her that her belief system has the merit of consistency. I’m no psychologist, but another is clearly on the autistic spectrum. It’s impossible to think this isn’t connected to their being flat Earthers. Somebody brought their daughter—I guess she must be fifteen or sixteen. I’m impressed as she fires pointed, direct questions at myself and the other speaker. Puns aside, she’s clearly on the ball.

Never think for a second that these people are stupid or crazy.

Can You Prove the Earth is Round?

Steer two: You’ve probably overestimated your ability to prove the earth is round. Unless you’re unusual, your knowledge about the earth’s shape is testimonial. Lots of knowledge is testimonial: chemotherapy cures cancer; there are humans in Gambia; your taxi is outside. Unless you’ve recovered from cancer, been to Gambia and, until you step outside to get the taxi, this is all testimonial knowledge taken from some source (such as a doctor, or Wikipedia or the Uber app on your phone).

Most people seem to ignore this fact. In debates, “globies” too often conflate their conviction that the earth is round with their being able to prove it. And then they quickly run aground when they try to prove it. Delivering an incontrovertible proof of the earth being round is hard! And when you fail, this will consolidate the flat Earther’s stance—they’ll dig their heels in all the more.

“”
Never think for a second that these people are stupid or crazy.

Testimonials Are a Valid Form of Evidence

Steer three: Testimonial knowledge is just fine. Flat Earthers will often demand that you prove the earth is round. When you fail, they claim victory. But that’s an odd thing to do! Imagine someone in the pub told you chemotherapy wasn’t good for curing cancer. How weird it’d be for them to start demanding that you explain the ins-and-outs of pharmacotherapy, medical oncology and biology and—when you failed to do so—that they’re right that chemotherapy is pointless. You’d be well within your rights to shrug your shoulders and tell them that, just because you didn’t know the exact specifics, what of it?

If you really must ignore the last steer and get into a protracted debate, I still have advice.

Steer four: Flat Earthers don’t trust your sources. Photos of the earth are made with Photoshop. Videos of the curve of the horizon are the product of a fisheye lens. (Warning! Most photos of the globe are composite images patched together by a computer, and most videos showing the curve showing the curve are the product of a fisheye lens!) But they have their own authorities. They have pictures alleging views of faraway objects that’d be impossible if the world were round. They have (tedious, hour-long) videos of laser experiments allegedly showing there’s no curve.

What’s sauce for the round, lump goose is sauce for the flattened gander. You both must play by the same rules. If you can’t rely on your testimonial sources, they can’t have theirs either. For each meme and video, shrug your shoulders—you’ve not witnessed these things. Just as they say we must ignore the live feed from the ISS station, we get to ignore their photos and videos. Denied access to their sources, it’ll be effectively impossible to “prove” the earth is flat.

(And having made this point once, don’t let up; all too often, we let people in debates “forget” awkward facts and move on. On this matter, though, you must give no quarter; deny them their sources—it’s only fair.)

Witches weigh the same as ducks. That’s what Sir Bedevere proves in Monty Python and the Holy Grail. Listening to the flat Earthers makes me think of him. It’s all eerily similar.

Consider some flat Earth arguments. Space must be fake, they say, because rockets wouldn’t work in space as there is nothing for them to “push off of.” It’s absurd, they say, that we’re hurtling through the galaxy at 230 kilometers a second—surely we’d feel it, like we were on a galactic roller coaster? Things which are far away don’t disappear from the “bottom up” because of the curve of the earth, but because of some (usually garbled) claims about vanishing points, perspective and the resolution of our eyes.

It’s all nonsense, of course. The conservation of momentum explains how rockets move. And forces don’t act on us at high velocities, but only when our velocity alters (which is why you don’t feel any g-force whilst driving on the motorway at 60mph—but feel a lot of g-force on a roller coaster at the same speed). And, yes, the curve of the earth is what explains why things (say, the sun) disappear bottom up as they go over the horizon.

I wouldn’t bother explaining any of this.

“”
A growing number of people think the earth is flat.

An astronaut floats through space

Use Flat Earth Arguments to Your Advantage

Steer five: Don’t teach them physics; teach them the consequences of their own physics. Just imagine that their claims are correct and things will still go against them.

Accept that, unless there’s a medium for a rocket to “push off of,” rockets would go nowhere. Rockets still would move in space. The rocket blasts explosive gases out of one end. At first—for a split second—there’s nothing to push off of. But as soon as some gas comes out, that gas is now there for the rocket to “push off of.” By their own reasoning, rockets should work.

Accept that, when moving at high speeds, you must feel forces acting on you. On an airplane you don’t feel anything at high speed—what’s that about? Flat Earthers say that you don’t feel anything on an airplane because it’s a “sealed environment”; in an unsealed environment (e.g., the earth, or standing on the wing of the plane) you’d feel a lot! Accept this for purpose of argument. Now imagine you wrap someone in cling film (that’s Saran Wrap for you Americans). You’re now sealed. According to this view, you will no longer feel forces acting upon you. And that’s obviously false. If I wrap you in film, and stick you on a roller coaster, you’ll be as disorientated and stomach turned as the next man.

Accept the word salad about things vanishing “bottom up” at the horizon being merely a function of them being far away from you. Imagine I’m attached to the bottom of the basket of a hot air balloon that soars off, out of sight, into the heavens above us. Apparently, as I get far away, I should vanish “bottom up.” But how would that work? What would my bottom be in this case? My feet or my head (or my left side or my right side)? What if I am constantly spinning—which end of me would be the bottom then? Awkward questions abound.

So don’t explain actual science. Instead, indulge their physics, explaining to them the upshots of their odd claims.

Afterwards, I walk back to the train with one participant. She says she’s not convinced either way. She thought the discussion was like herding cats and that there was little debate. She’s right.

Above I told you to pause as to why you’re debating.

“”
In debates, 'globies' too often conflate their conviction that the earth is round with their being able to prove it.

Steer six: Debate makes a difference. The convinced flat Earther is never going to change his/her mind but some people out there aren’t convinced yet. They’re of two minds about whether the earth is flat—they’re of two minds about testimony, authority and science. And they’re listening to what you have to say. Debate sensibly. Debate calmly. Debate respectfully. Do it, if not for those already lost to the flat Earth movement, but for those in danger of falling into its grasp.