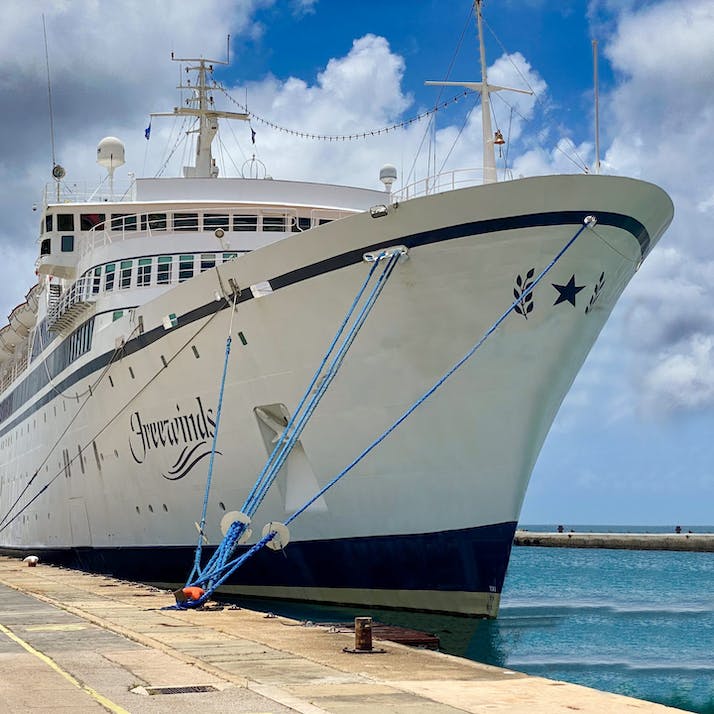 I Was Born and Raised in Scientology's Sea Organization

I thought my service was going to save the world.

When I was 13 years old, I signed a billion-year contract to commit my life to the principles of Scientology.

I don’t think I really decided to join the Sea Organization as much as I thought it was my only choice. And I don’t remember if I fully, without any doubt, believed I would be a member for a billion years. That number was inconceivable to me at the time, but I signed it anyway because I believed it to be the only path forward.

Scientologists ultimately seek a higher state of being by helping to “clear” the world of the reactive mind, which is believed to be the source of irrational behavior and fears. To do this, members work with an internal auditor to help them achieve a personal state of Clear—the first major goal for all Scientologists.

Past the state of Clear lie the bonus levels—Operating Thetan (OT1 through OT8). After a lot of additional auditing to reach these levels, it’s said that Scientology’s ultimate truths will be revealed to you. In our world, this was analogous to being superhuman.

We were taught that the only way to get rid of your reactive mind, the part that holds all the painful and unconscious memories from this and all previous lives, was to continually visit an auditor. So, at 13, that’s what I wanted to become.

I believed my service to the church was the only way to save the planet. But auditing was very expensive, and Scientologists would spend thousands or millions over their lifetime if they stayed with the church.

“”
I believed my service to the church was the only way to save the planet.

I Spent My Childhood in Isolation

How did a teenager come to a decision on what to do with their next billion years? I was born into Scientology; a closed-off environment was all I knew. My parents were Sea Org members whose first priority was continuing the mission of the church. Raising children was not of primary concern, so any kid born into Los Angeles’s Sea Org was raised by other Scientology staff. From ages 5 to 13, I went to a boarding school in the mountains of Santa Clara, California, called Canyon Oaks Ranch—about an hour drive north of L.A.

The ranch held about 150 kids of various ages in dormitories, and our time there was split into thirds. One-third of the day was spent on our jobs, like cleaning the ranch, cooking and caring for other children. One-third was reserved for schoolwork, but only reading, writing and arithmetic. We had no exposure to outside ideas—no internet, no TV, not even science or history classes.

The last third of our time was spent in Scientology studies, where we were taught (and believed) that we were adults in young bodies. After all, we were spiritual beings who had lived billions of lifetimes before, so why shouldn’t we act as mature adults? Since we weren’t allowed to be exposed to many people or ideas outside of Scientology, we had no reason to believe this wasn’t true. We were told this was the best that life could be, and we believed it.

We were only allowed family visitors for a few brief hours on Sunday mornings, when most of our parents had off from their own duties. My father worked evening and weekend hours in the Sea Org and studied Scientology the rest of the time, but he had Monday mornings off for personal chores. He would sometimes spend those Monday mornings visiting the ranch, but he could only visit with me during a short class break time.

My mother, however, was never able to visit because she was working at the church’s international headquarters, the top-secret Gold Base where David Miscavige currently resides. Some other children had better luck and more frequent visits, but my parents’ roles in the church didn’t offer us that luxury of time.

If our productivity levels surpassed expectations and our written requests for approval were signed by two to three higher-ups, the ranch would let us leave for the day on birthdays or major holidays. On these rare occasions, we got to visit some family members outside of Scientology. But any attempt by my family members to convince me that Scientology was wrong would only mean that I would not be allowed to visit them again—and, based on what I’d been taught, I would think they were evil and needed saving.

Without anyone from the outside challenging the way we lived as kids, our lives after the ranch were fairly predetermined. Our parents were in the Sea Org, so it was a natural progression for us to follow and sign the now-infamous contract.

I Caught a Glimpse of the Outside World

Once indoctrinated into the Sea Org, I worked at the PAC Base—the blue Scientology building between Fountain Avenue and Sunset Boulevard in Los Angeles.

When my petitions for a day off were approved, I would often spend time with an uncle on the outside. From this limited exposure to the rest of the world, I realized how much more free time outsiders seemed to have. I learned about weekends and evenings off, which was unbelievable to me after only having a few hours off for family visitations my entire life and having no time to be a kid at the ranch.

Seeing how everyone outside of Scientology spent their free time is what made me want to leave, so I started routing out.

This decision was completely my own, but I was terrified of what my parents would think. The authorities, of course, tried to change my mind. The routing out process is lengthy and exhaustive, but it’s meant to convince you to stay. They first offered me a more prestigious post and other potential perks, then continued with long auditing sessions analogous to confessionals to admit any spiritual or physical crimes I may have committed.

After a few long weeks of routing out, I had started to cause some trouble. Once, a friend and I lit a smoke bomb and threw it into one of the staff dormitories. This behavior, combined with the fact that I had yet to change my mind to stay, pushed the authorities to decide that my time with them was over.

They also decided it was time for my parents to route out with me.

At that time, my parents were part of the Rehabilitation Project Force (RPF), which is kind of like Sea Org prison for those who have made critical mistakes and require spiritual rehabilitation. My dad’s critical mistake was talking to a Suppressive Person, and my mother’s was looking at online content that was critical of Scientology.

We were all upset when we found out they also had to leave—they, because Scientology was all they had ever known, and me because I was the reason they were excommunicated.

Only two years after I signed the billion-year contract to join the Sea Org, my parents and I were living on the outside.

“”
Only two years after I signed the billion-year contract to join the Sea Org, my parents and I were living on the outside.

Leaving the Sea Org is quite different than simply leaving Scientology. Even though we had exited the organization, we still felt like Scientologists. We wholeheartedly believed that once we had stable jobs and could afford it, we would be the people who went to the Sea Org for auditing. We would be like the people we used to service, like the celebrities often associated with the church.

Today, over 20 years after we’ve left, a few of my old friends still consider themselves Scientologists and actively pay for their services. Another friend prefers to stay neutral, not joining in the services but also avoiding any criticism of the church in order to stay in touch with his family who is still on the inside. I lost a few friends along the way, of course. The way that my family had to leave meant many of them weren’t allowed to stay friends with me.

Now I’m finally living with my own freedom. I have the ability to make decisions every single day without the influence of the ranch’s upbringing. I am grateful for the ability to make these choices because I know so many others who—like I once was—are not so lucky.