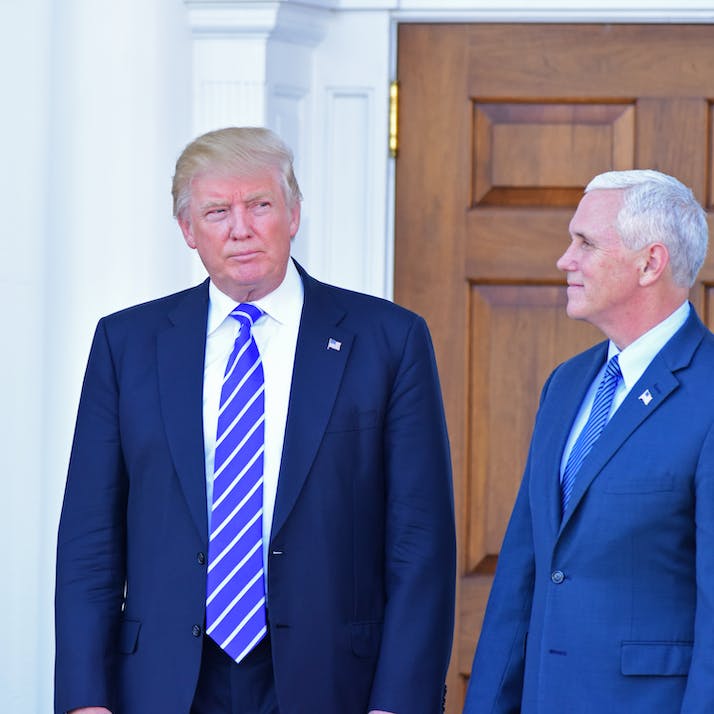 Working in Trump's Government Is Exactly as You'd Expect

An employee inside of the government explains what it's like to work with the Trump administration.

We were fortunate enough to hear from this voice inside the U.S. government at this pivotal time in our history. We thank the writer for trusting us with the story.

The wealthy businessman sat across the wide, polished table from the high-ranking Trump appointee with a strange expression on his face: cautious, keen and hungry.

That’s right, he said. Many of the world’s most precious metals. And, for the United States, key strategic minerals.

It was just another D.C. meeting, squeezed between more meetings, like a thousand before and a thousand to come. Late-afternoon sun gleamed into the room, which was furnished with pomp: crown molding, gold-leaf foil, historic photos framed on the walls. An American flag stood near the window, glowing.

But something felt different. From a couch in the corner, I underlined those words in my notes: strategic minerals.

What Is a Civil Servant, Exactly?

I’m a civil servant—which just means I’m a permanent government employee, serving whichever presidential administration gets elected. The vast majority of the federal workforce is made up of civil servant positions, managed by a thin layer of political appointees. In January 2017, we didn’t leave; we just got new bosses. Most of the Trump appointees I’ve worked with are good and hard-working people—but with some of them, I’m just not sure. The Trump administration has pulled in a lot of people who’ve never worked in government, including many from the private sector. Some just seem unfamiliar with or uninterested in the finer details of public service.

So I thought, he said, wouldn’t it be nice? For those assets…to be owned by an American?

He raised his eyebrows and opened his hands, as if an invisible world bloomed between his fingers.

Better us than China, he said, right?

I underlined that, too: China.

In Trump’s Government, There Are Meetings That Shouldn’t Even Happen

Just by being here, the businessman was taking some risks. Meeting with the government, asking these questions, poking around these bureau drawers. But he was focused on rewards, not risks. The Trump appointee straightened.

Whatever it was, the businessman’s idea wasn’t very complicated. For years, a group of corrupt, rich foreigners operated some corrupt, lucrative companies that owned mining rights in corrupt, poor countries. But now the U.S. government—across several agencies, in powerful symphony—was cornering the group. After years in the shadows, they were finally feeling the cold, searing light of American justice.

Which was well and good, but the businessman’s idea was: What about the mines? These were natural resources that ended up in cars, smartphones and weapons; they were some of the rarest and most valuable stuff on Earth. Why couldn’t an American—why couldn’t this very businessman—simply acquire the mining rights from the group of corrupt, rich foreigners?

Money wasn’t the problem; with assets like these, for a businessman like this, money was no issue. The problem, plainly, was American justice: Buying mines from corrupt criminals was not exactly, well, standard practice. But of course—these days, in this city, nothing was.

Often, My Job Was to Take Notes. Not Today.

The room fell silent except for my pen scratches. The Trump appointee flipped through the memo I’d written, realizing it had nothing about mines or corrupt foreigners—when the businessman asked for this meeting, he hadn’t mentioned any of that. But even if he had—he was barking up the wrong tree. He’d gotten the wrong agency, the wrong bureau drawer. There was nothing this particular high-ranking Trump appointee could do to help him.

Suddenly, the appointee turned to me.

I put down my pen and looked up; his eyes were like dark mirrors, blank and inscrutable. From across the table, I felt the businessman’s gaze like a laser. My stomach clenched.

In this meeting, I was a nobody. Technically, I wasn’t even supposed to be there. Like most high-ranking Trump appointees, this one had a staff of junior Trump appointees to do stuff like sit in on his meetings and take notes. I was just the civil servant they asked to write a memo; I had expertise in topics loosely relevant to the businessman’s other affairs, before he came in with curveball questions. But on the day of the meeting, the staffers must have been busy. At the last minute, they called me down.

Yes, I said. Interesting. Clearing my throat, I sat up from the couch. But maybe we should check with legal?

The two men stared at me, then back at each other.

I fell back into the couch, took up my pen, and then realized, finally: Yes! Yes of course, I thought: Legal!

Sure, the businessman was barking up the wrong tree. Our agency was powerless; he’d need to circle D.C. again, go knocking on other appointees’ doors. But still—a high-ranking U.S. government official was alone in a room with a wealthy businessman, who seemed to be fishing around for tacit approval to buy mines from corrupt foreigners. Where on Earth were the lawyers?!

Right, said the Trump appointee. We could ask legal.

The businessman’s eyes flashed at me—wondering, I imagined: Who is this?

Minutes later, it was over. An assistant appeared at the large door, beckoning; the Trump appointee’s next meeting was waiting. The two men stood up, uttered pleasantries, shook hands, and agreed to follow up.

Civil Service in the Trump Administration Involves Falling in Line

Closing the door behind the businessman, the Trump appointee turned to me.

My stomach clenched again, and I shrugged my shoulders. There was nothing to say; the businessman had been barking up the wrong tree.

Right, the Trump appointee said, staring off into some middle distance. He walked to his desk. Great, he said, gesturing to the door. Thanks.

On the way out, I held up my notepad. I’ll type up the notes and send them around, I said.

He looked up and seemed to wince a little. Ah, he said, smiling now. No, don’t bother.

It’s no bother, I said. And it wasn’t: sharing notes with relevant colleagues is what government employees do. It’s the job.

No, really, he said. Don’t send around the notes.

There was a long silence. I nodded but didn’t know what to say. It was a scenario I’d never imagined.

Look, he said, just ask me in a month.

I smiled, still confused. Ask you in a month?

His assistant flurried in with a pile of papers. The next meeting was ready.

Yeah, he said. Find me in a month and I’ll tell you what happened.

He looked down at the papers; his assistant guided me out. A group of other, lower-level Trump appointees milled about in the waiting room. They seemed to size me up—wondering, I imagined, whether I was a civil servant they could trust. I crossed the building, down dimly lit halls and staircases, to my cubicle. The windows in our office looked onto a small interior courtyard—just an empty square of concrete and stone, below a patch of sky. A place the public never sees.

For My Superiors, This Was Just Another Day in the Trump Era

I told my direct supervisors about the meeting; they laughed and shook their heads. Go figure, they said, chalking it up to another strange quirk of these strange times. They were civil servants, too. By that point, nothing much surprised us.

I threw away the notes. Every now and then, I google the wealthy businessman and the mines—but there’s nothing.

I never asked the Trump appointee what happened. There was no follow up, and his staff never asked me to take notes for him again. The next time I saw him, weeks later, he stretched out his hand and introduced himself with a smile. He’d forgotten me completely.