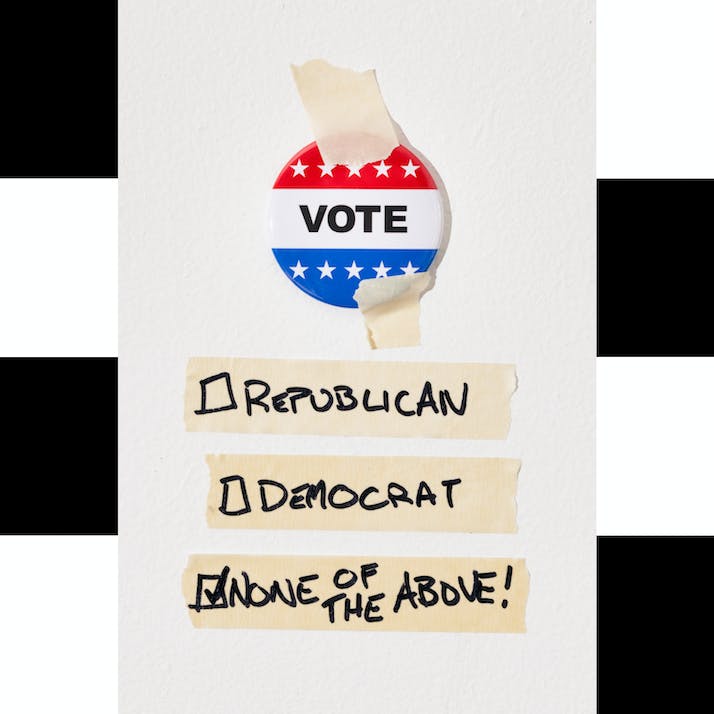 A passionate argument against voting on November 3.

Election Day is right around the corner, and I’m not voting. It’s okay if you don’t, either.

As a libertarian-minded person who believes in small government and fiscal responsibility, I will not vote for the “very, very big brain” of Donald Trump. I will not vote for Joe “I’m coming to you to ask for a quick favor” Biden. I will not vote for Kanye “Harriet Tubman never actually freed the slaves” West. And I’m certainly not wasting my precious time lining up in a facemask to write in the name of someone who doesn’t stand a chance.

Until and unless there is a candidate who I feel I could vote for in good conscience, I’m not voting. I’m not hiring just anybody to work for me unless that employee meets my standards, and let’s face it, most politicians don’t. I don’t feel represented by the candidates the parties in power keep offering up, and I won’t vote for a “lesser evil.”

When conversation forces me to mention my disinclination to vote, I generally run into two lines of fire. There are those who tell me that people “died for our right to vote”—who, specifically, died for my right to vote, I wonder?—and the ones who tell me I don’t have a right to “participate in the conversation,” that “I’m letting other people” decide our fate and, as a result, I don’t get to “complain” about the goings-on of the country.

Arguing against this last point is a hill I will die on.

“”
Until there is a candidate who I feel I could vote for in good conscience, I’m not voting.

To Me, Being a Nonvoter Means Freedom

I’m not the one legitimizing the system that got Donald J. Trump elected to the highest office in the land, or that gave him enough power to terrify so many of the people living here. Voting legitimizes the government structure we have in place and demands that the voter accept the outcome, whether they like who wins the Oval Office or not. If you feel compelled to threaten a move to Canada if your candidate loses, it’s possible that the presidency has acquired too much power and influence. How does putting someone else in that office change that fact?

Because I haven’t put my vote behind a particular horse in the race, because my world isn’t spinning around any particular politician, I’m freer to order my world and political decisions around a set of values and principles. I can laud politicians when they do something right and I can condemn their actions when they’ve done something wrong. Not voting doesn’t mean I can’t call things as they are—indeed, it leaves me greater latitude to do just that. I can describe in detail how the actions of former President Barack Obama are similar in many ways to the actions of Trump, and how neither should have had that authority in the first place. Can anyone who voted for Obama or Trump say the same? Or has your partisan rage left you blind?

My non-vote says presidential candidates and government officials aren’t quite up to snuff. Do better. Be better. And if someone better steps up to the plate, I’ll be first in line to cast my ballot.

“”
I’m not the one legitimizing the system that got Donald J. Trump elected to the highest office in the land.

America Is a Nation of Not Voting

I’m not alone in abstaining from this circus variety of democracy. In February, the Knight Foundation, a nonprofit focused on the First Amendment, released a report entitled “The Untold Story of American Non-Voters” that found that there are “about 100,000,000 eligible voters in our country who do not vote at all.”  When looking at the 2016 presidential election between Trump and Hillary Clinton, Knight reported that “the largest bloc of citizens in our presidential elections are not those who vote for one candidate or another, but those who do not participate in the election at all.” As the study points out, Clinton got 29 percent of the votes; Trump got 28 percent of the votes; but the most votes went to nobody, with 39 percent.

The reasons for that differ, according to the study. Some 38 percent of nonvoters cited a lack of confidence “that elections represent the will of the people, and nonvoters are more likely to say that this is because the system is rigged.” Others, they say, “are twice as likely as active voters to passively encounter news versus actively seeking it out.”

I’m Not Voting Until There’s Something Worth Voting For

Today’s culture tells us that in order to enact change, people must vote and that those who do have the proverbial moral high ground. I just don’t believe that, in the end, a President Biden would be markedly different from a President Trump—sans rhetoric and Twitter, of course. They’re both partisan cogs in the system. They both spend money like we won’t have to pay it back someday. They both want the government to play a more active role in our lives. There are subtle differences in which government programs they want to prioritize—Trump may prefer military pork spending to Biden’s welfare spending—but the end result is the same. If Americans really wanted to vote for the change we’d run, say, a Republican versus a monarchist versus a fascist—a real one; Trump isn’t an actual fascist—versus an anarcho-capitalist.

At least in that election, you'd have a real breadth of ideas and genuine differences of opinion in how government should be run and on the role government should play in the lives of the people. That’s not what this election is. It’s a popularity contest, where the winner gets to decide which special interests get tax dollars—and future generations get stuck with the bill. There’s nothing noble in participating in such a system. And you can get a cooler sticker to wear on your shirt after a visit to the dentist’s office.