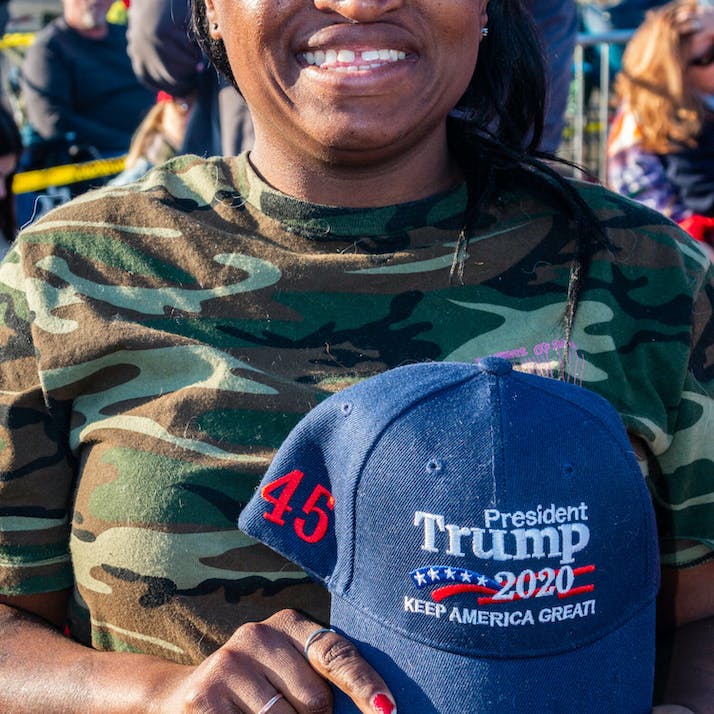 A Trump supporter makes an argument for supporting the president again in 2020.

“You are not welcome here.”

These words are forever tattooed on the inside of my eyelids. Every time I close my eyes I’m reminded that I am different. That I’m an African-American pre-op transgender man.

“You are not welcome here.”

I hear the voice of the person who yelled it to me when I look in the mirror.

It wasn’t some big, country, cis, white male wearing a MAGA hat and driving a Ford with too-big wheels, a cooler of Budweiser in the back and a gun on his hip, like how the media likes to portray bigots. It was the total opposite, someone who is supposed to love me no matter what. My mother. My Black mother.

“”
Why am I now being hated for being me?

I had explained to her how President Trump has my vote, and that it was her idiotic beliefs that made her say those words. I left feeling alone; a slap in the face and an empty feeling in my heart, blocked on every social media account because I support a man she thinks is racist.

Just a few hours ago everyone was happy with me. Why am I now being hated for being me? It’s true I voted for Trump the first time around and didn’t let anyone know. During Obama’s eight years, my family and I were homeless. There were no jobs, and the gas prices were high. Some nights we didn’t eat. I went to school just to get a meal, but thanks to Michelle Obama, it wasn’t enough. I was below average weight, and furious at how our leader was handling it.

I’m Black and Trans; Trump Supporters Have Embraced Me

I turned 18 just in time for the election year. I voted for Trump. He was clearly the right choice. Just because Hillary is a woman does make her fit to be president.

People tend to ask me why I defend President Trump when he banned trans people from enlisting in the army. My response is that being transgender means replacing hormones, so we have mood swings and our minds are sometimes cloudy. We have to go to therapy just for the surgeries we want and have to keep going to therapy afterward to make sure we don’t have a mental breakdown. We wouldn’t be able to control our emotions, and if we get captured we would not be able to access the meds we have to take to be who we are.

The news portrays Trump and his supporters as racist idiots who only want white supremacy. That's not true. My own community has for the longest time denied me over who I voted for. I am a member of a lot of Trump 2020 support groups, and I get the most love and support I have ever felt within those communities. It’s overwhelming how supportive they are, even knowing that I’m Black and transgender. All lives matter to them. Black Lives Matter is a joke and is causing racial tension in America. Defunding the police will make the U.S chaotic. Retraining police is what I believe in.

President Trump is helping jobs come to America. Since he has been in office I’ve been employed, even during COVID-19. Trump is the leader we need for the next four more years to erase all the bad that Obama left. Joe Biden is not fit to be president. I believe that Trump will make the U.S.A. a better-protected place to live in, with more jobs and lower gas prices. We have a president right now who tells it like it is. I see a war happening with Biden in the office because he’s a creep and a weak human being.

“”
The news portrays Trump and his supporters as racist idiots who only want white supremacy.

Four More Years of Trump Might Bring Us Back Together

I am proud to be an American while Trump is in office. He made promises and kept them. I believe the only reason Democrats don’t take him seriously is that Obama endorsed Hillary. If it were the other way around, there would be no problems or complaints.

I have faith that President Trump will stay in office because I know there are a lot of undercover supporters like myself who finally came out due to the delusional people with COVID-19 and BLM. I can’t be the only one who sees the liberals get madder and more aggressive when they see a Trump sticker or hat—like we are up against literal babies.

This is why I am voting for Trump.

Hopefully, with four more years, my mother and my so-called LGBTQ+ community, which is supposed to be so supportive and open-minded, will turn around and agree with me. I am not trying by any means to change anyone's views—I’m just here to tell my story that the real hate is with the people who are against our president, Donald J. Trump.