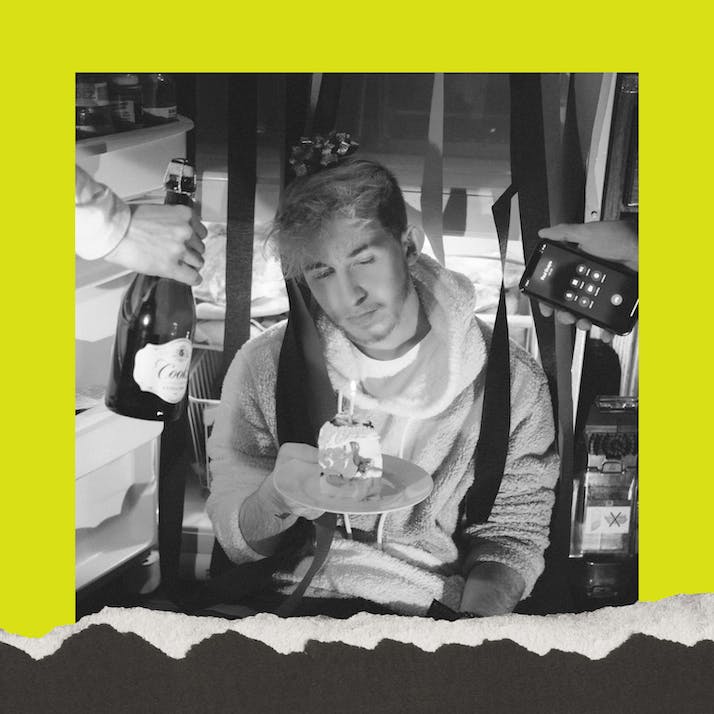 My Year Addicted to Zoloft: A State of SSRI-Induced Mania

I was misdiagnosed with depression. That led to a year-long addiction to pills.

I hear a lot of things lately described as “ugh, so cringe,” but have you ever really cringed? That full-body wince of reliving an experience that stops you in your tracks? There has to be a highly specific German word for the shame of a post-hypomania comedown. What unhinged screeds did I post online? Whose boundaries did I overstep when I was feeling gregarious but acting obnoxious? Oh, God, I went to open mics, didn’t I? Even now, years later, the memories still make me flinch, clench my teeth and shut my eyes for a moment.

All these cherished memories and more come from the year I spent on the wrong antidepressant, making me perpetually hypomanic most of that time. But before those thrills came a long history of depression, starting in my early teens.

Looking back at it now, I can laugh at how I used to shut myself in a closet to listen to Joni Mitchell’s “Blue” or Radiohead’s “How to Disappear Completely” on repeat in a very maudlin, very teenage way. Harder to laugh off were the persistent bouts of suicidal ideation I experienced or the all-consuming, debilitating sadness that kept dragging me to bed while the milestones of young adulthood passed me by.

How I Came to Take Zoloft for Depression

For many years, I self-medicated with alcohol. I know: Treating depression with a depressant? Groundbreaking. Alcohol never really worked for me, although not for lack of trying. Eventually, I discovered stimulants, and things got much worse. No one at the sex party where I was introduced to crystal meth warned me that I wouldn’t be able to sleep or eat for the next two days. I was convinced that this drug was going to kill me, but also that I never wanted to do anything else ever again.

Thankfully this revelation scared me enough that I asked for help, and I ended up in treatment, getting sober at the age of 26. The depression that had plagued me for years followed me into sobriety, though, so I also started going to therapy for the first time.

To finally talk honestly about my sadness helped, but the sadness persisted. The first professional diagnosis I got was major depression, which at the time seemed a little dramatic. “I’m fine, really,” I insisted. “I’m not depressed depressed—just a little blue.” After many months of deliberating my therapist’s suggestions, I decided to try a pharmaceutical solution. I was terrified of starting. In my newly sober state, I worried that I wouldn’t be myself anymore if I let this outside substance tamper with my brain. On top of that, I had grown up indoctrinated by my militantly New Age mother to distrust any medication beyond a spoonful of turmeric and honey.

But I needed help. I went on Wellbutrin, which didn’t make a dent in my depressive episodes, so after a short stint of that, I tapered off and went on Zoloft, a selective serotonin reuptake inhibitor (SSRI).

Zoloft. My dearest friend. You made it hard to sleep, and even harder to nut, but wow, we really made some terrible memories together, didn’t we?

I Ignored the SSRI-Induced Hypomania Symptoms

There were clear warning signs early on that things weren’t right, like the buzzing in my brain and the inability to sleep for multiple nights in a row despite being totally physically exhausted. I soon forgot about that, though. I was too busy enjoying my newfound fearlessness speaking in front of large groups of people. I was suddenly charismatic and able to strike up a conversation with anyone about anything, and I loved it.

I had a lot of ideas that felt genius at the time, but that now flood my body with cortisol and shame when I’m reminded of them. For a while, I became fixated on being an amateur documentarian, infuriating my family by trying to film every aspect of our lives for a project I can’t really remember the point of. Once, at an open mic, I stripped down to my underwear for the punchline to a joke about terrible tattoos (of which I have many.) That artistic decision I actually stand by. I just hope to God no recordings of it exist. In those months I was also promiscuous in a way I’d never been before. Which I’m not against—I swear I’m not some sex-negative nerd. But my behavior sometimes led me back to sex parties and the company of active meth users, and brought me dangerously close to relapsing.

Around this time I was promoted to the head of the tiny organization I worked for. I had a very forward-facing role, and I got an impressive-sounding title that inflated my already dangerously boosted ego. I thought I desperately needed all the energy I could get from the Zoloft. It wouldn’t dawn on me until much later that I never put any of it to good use.

The Antidepressant-Induced Mania Was Enthralling

What I remember most about my year on Zoloft is how intoxicated I was by what I imagined to be my limitless potential. It felt like electricity coursing through me that I could use to accomplish anything, if only I could get all that energy focused in one direction for long enough. But I never could. I had a dozen projects started at all times, rarely finishing anything.

My fast-talking, and the crazed pep in my step, made it clear to my doctor that I was hypomanic, and she suggested I taper off the Zoloft. The thought of giving up this new life, and going back to the depression I had lived with for years, terrified me—not to mention the fact I was a very important person by then, and I couldn’t afford to lose this new charisma and electricity. I had things to do, new visions to pursue, a world to change!

I convinced myself that what I was experiencing wasn’t hypomania, but just who I was when I was freed from the burden of depression. I was how I was always meant to be: unstoppable. At my doctor’s insistence, I went to a psychiatrist with whom I spoke for maybe ten minutes. I dressed in what I thought was chic, understated business casual attire. During our session, I deliberately slowed my words and dimmed my new charm just a little, and told him how seriously I had weighed my doctor’s words, but that I wanted to continue with the medication that had lifted me out of depression. He said great, you seem fine, let us know if anything changes.

I had just shy of a year of sobriety at that time, and it didn’t enter my mind that I wasn’t being all that sober. I wanted to believe that by doing and saying only what I thought would convince that psychiatrist to let me stay on the meds, I was actually practicing self-advocacy as an informed patient. It felt important to have control over my own brain chemistry, despite the many years of boozing and drugging that proved I am the exact worst person to be in charge of that.

Turns Out, Zoloft and Bipolar Don’t Always Go Together

I continued to be unpredictable and unreliable at work, always brimming with grandiose, vague plans, but never following through on my promises. The thing that ended up getting me fired, however, was fostering a hostile work environment. I always thought I was cheekily toeing the line of what was appropriate, when in reality it was more like kicking down the door to tell explicit jokes that nobody wanted to hear. I had no filters. I learned too late that I was making everyone around me uncomfortable and cultivating an environment that wasn’t safe to work in. This is what I feel guiltiest about from this time, the thing I still lose sleep over.

Losing that job is what finally snapped me out of it. I found a psychiatrist who I could see regularly, and he patiently explained bipolar II disorder to me. He gently suggested that this SSRI might be making me worse, despite how spectacularly un-depressed I felt.

As well as the brain-melting, I’ll-have-what-she’s-having grade orgasms, I also regained clarity. I could reexamine my behavior of the previous nine months in the cold light of day. My filterless-ness, my impulsivity, my near-total lack of executive functioning—at one point the power in my apartment got cut off because I wasn’t keeping track of anything in my life. (A little on the nose as far as signs from the universe go.) In hindsight, it was easy to see just how much of a mess my life was, and how mismatched I was with Zoloft.

The Complexities of Determining the Right Pill

I’m not alone in having this experience. Many people with bipolar II are first treated for depression, and many of them experience hypomania as a result, but they can feel reluctant to stop the mania-inducing medication. I forget where I first read that, but it was after I’d finished tapering off the Zoloft and I remember sobbing afterward. There is no greater relief than learning just how basic I am.

Yes, I gamed the system. Yes, I manipulated a psychiatrist to convince him to keep giving me my drugs so I could continue my reign of terror as a charming, fearless, sleep-deprived and unpredictable egomaniac. But I’m not the first person to have pulled that kind of grift, and it doesn’t disqualify me from seeking treatment now. I was just doing the best I could with an imbalanced brain.

I wish I could offer a comforting platitude—a promise that It Gets Better—but I can’t honestly say that it does. I’ve only recently gotten insurance again and regained access to mental health services. I have enough experience raw-dogging reality to know that I can’t talk or think or pray my way out of depression, so I’m once again faced with the decision: To medicate or not to medicate?

How is it that this choice ultimately falls to me, someone with a long history of such famously bad decisions? I still feel like I don’t deserve help after making such a mess of my life. I’m worried that I can’t trust myself to honestly say, “Yes, this pill is the pill for me,” considering my history with addiction and how much I loved—and I mean really loved—being high.

But I’m done with thinking that I’m too tragically unique to get better. I’ve met too many people with bipolar II who had similar experiences but eventually found a medication that worked for them.

I’m scared about asking for help, but hopeful enough to try again.