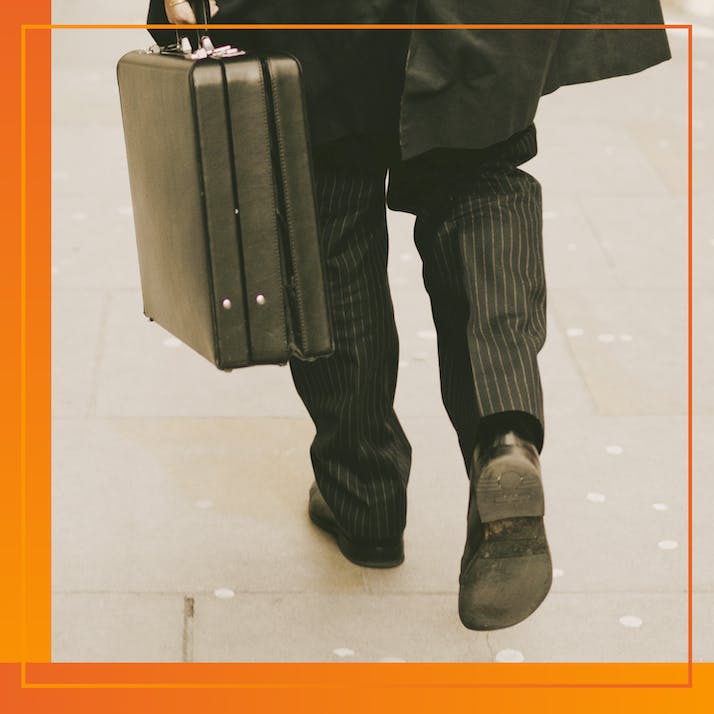 I Work for My Estranged Father

The COVID-19 crisis brought her two choices: work for her alienated dad or don't work at all.

We sat opposite each other, in a gin bar in my university city. This was the first time he’d come to visit, and he looked like a stranger, with aged eyes and greying hair. Before I’d even finished my drink, he was ordering us another, as if he couldn't stomach my presence sober. But his financial generosity was never matched in emotional availability, and after a few units, he looked across the table and told me he didn’t love me. My dad.

And then, in the very next breath, he offered me a proposition: “Come work for me.” A few years ago he’d started a recruitment company from his kitchen table, hoping for a greater life-work balance, but it ended up having the opposite effect. The offer wasn’t about me gaining office experience, but him having more time to play golf or meet the boys at the pub, while someone else did his administrative work.

I couldn’t think of anything worse, but for some reason, I told him I’d think about it.

I’ve Got Daddy Issues, and for Good Reason

My apprehension towards the role didn’t have to do with the job itself, but the man who would be managing me. If even Beyoncé struggled to deal with having her father as her boss, then surely it would be impossible for me. My dad wasn’t the usual, embarrassing-but-endearing dad who wore ugly flannel shirts and plaited your hair wrong. Our relationship has always been strained. There wasn't one monumental event that ruined our relationship—just a gradual, dull flame that slowly turned it to ashes. I didn’t know if adding work into the mix would cause it to snap entirely.

My mum often tells me a story that I think sums my father up. The night she went into labor, my dad refused to drive her to the hospital because he’d already made plans that night. She later discovered the nature of those plans when she found a stranger’s lipstick in the glove compartment of their car.

My dad was objectively uninterested in his family and distracted himself with every other branch of his life that didn’t involve his wife or child. Late nights at the pub meant he missed bathtime again. Another overtime shift meant he wouldn’t be coming home tonight. This intensified, until he was forgetting birthdays, and spelling my name wrong the times he actually remembered to write a card.

Eventually, my parents divorced, and my mum moved us away from the infectious nosiness of a countryside village, where everyone knows the business of your failed marriage. My father became physically distant, which gave him an excuse for his emotional unavailability.

He'd promise to come to my primary school plays and leave me scanning the crowd as I recited my lines to his empty seat. He'd make fun of my hook nose, and when I broke it, he called it an improvement. When I was struggling with my mental health, he tried to persuade me not to get therapy. When I told him about men who groped me in clubs, or ex-boyfriends who took advantage of me, he told me it must’ve been “something I’d asked for.”

He would offer me nothing but silence for months, until eventually I’d buckle and visit him, only to arrive and have him go through my bags, read my diary and micromanage every element of my weekend.

But he was performatively affectionate, which reduced my ability to criticize him. His veil of financial generosity ensured that onlookers saw nothing but a generous father spoiling his child. He’d regularly post on Facebook about how proud he was of his daughter, when he hadn’t called me in months. And now with this job offer, my dad was yet again presenting himself as the hero and me as the ungrateful villain, never satisfied with his effort.

“”
I couldn’t think of anything worse.

COVID Gave Me Two Choices: Work for My Dad or Don’t Work at All

When he’d made his proposition, I still had ten months until I finished my creative writing degree. I didn’t know what I wanted to do, but the careers department told me there were options. I could intern at a magazine with glossy pages and backstage passes to London Fashion Week. Or I could be a teacher, enriching the lives of spotty teenagers with the microcosm of Of Mice and Men. Or even a children's publisher, doing PR for whatever might be the next Harry Potter.

The world was my oyster. Until it wasn’t.

As spring crept in, COVID-19 cases crept up and the U.K. went into lockdown. Yes, we were healthy and resilient graduates, but as the mass redundancies started, we also realized we’d all be jobless.

As we entered a recession, my creative degree was an ineffective shield against unemployment. I was rejected and ghosted by the few opportunities I could find. Moving back home wasn't an option, but I couldn't seem to find work either. And then I remembered my dad’s offer.

I’m aware that it’s a luxury to have a job offer in a pandemic, and I am immensely grateful for my privilege. COVID continues to push many to Universal Credit or food banks, and I would never want to undermine how truly awful that is. But accepting a job with the man responsible for two decades of emotional abuse wasn’t easy either.

“”
The world was my oyster. Until it wasn’t.

We spent a week together while he trained me. We sat across the kitchen table and I would ask him a question four times before it would penetrate his eardrums and he’d give his response in the form of a cold glare. He spent a suspicious amount of time playing golf or at the pub, spending his five-figure commission while I ran his company for minimum wage.

But during that week we probably spoke more than we ever had before. I genuinely thought this might be a turning point—if he loved his business, and I was his employee, then he would have to love me.

For a while, it seemed like it might work that way. Even after my training, he’d call every other day to talk business, and he’d become involved in other strands of my life by default. We’d even go to conferences together in Manchester or Southampton. For the first time ever, he’d verbally express pride when I did my job well.

But the serotonin rush of our sudden proximity still can’t fill the father-shaped void in my family tree. The more we speak, the more I expect regular contact, which he fails to maintain. He’ll tell me he needs me at 8 a.m., so I’ll be ready at my desk at 8 sharp, but he won’t send any tasks until the afternoon. I put my days off in our shared calendar weeks in advance and yet he’ll still email me obsessively with urgent things to do. I work 12-hour days and he guilts me into working more.

He is everything he’s always been—demanding, impatient, selfish—but now on a magnified scale. The realization that nothing has, or ever will, change within our relationship is difficult, but if anything, I’m glad I took this job. It’s taught me that there is no Dad of the Year waiting for me around the corner. This is it. He’s never going to wake up, like Tom Hanks in Big, as an adult with an awareness of his actions and a desire to alter them.

Perhaps my father really doesn’t love me or perhaps he just can’t verbalize it. All I know is that working for him hasn’t fixed anything. Instead, I need to focus on accepting our relationship for the broken vase that is it, rather than trying to stuff it full of roses.