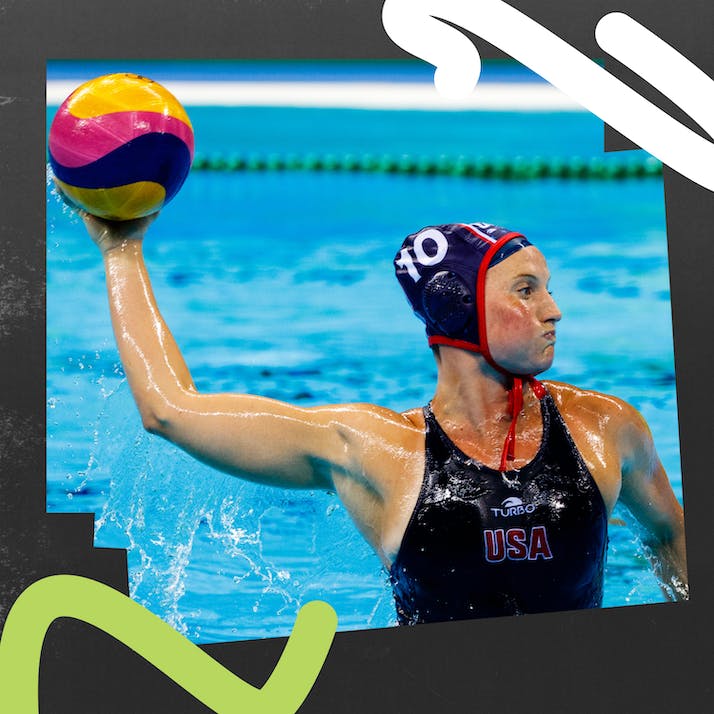 Water polo allowed me to play against Olympic athletes and push for more opportunities for women.

During my fourth year as a high school teacher, a tenth-grade boy walked into my class with a shit-eating grin and asked, “You’re starting a water polo team?”

In a school system without pools or competitive swimming, starting a water polo team was last on my list of ventures. I was confused, to say the least. I ran through all possibilities in my mind: The students knew that I played water polo in college. I was currently the head coach at my alma mater. Our principal expected the staff to make everything happen for the kids whenever they wanted something. Still, this proposal was 25 yards late and about 162,000 gallons short.

“What on earth are you talking about?” I asked him back.

Into the hallway I went, where there was indeed a huge homemade sign on the wall:

“SIGN UP FOR WATER POLO. MISS V. WILL TEACH YOU HOW TO HANDLE YOUR BALLS.”

Eleven boys had already put their names on the attached piece of notebook paper, ripped from some insolent sophomore’s notebook. He didn’t even bother to tear it on the perforated edge.

I yanked the poster off the wall and turned to find most of my class standing behind me, desperately trying to hold themselves together. I was laughing inside too, because, come on, it’s a little clever and mostly harmless. Still, I mustered up the most adult-authoritative voice I could manage at age 25 and demanded, “Who put this up here?”

Crickets. Some giggles, but mostly crickets.

In total, there were five posters throughout the building with various promises of what I would do for their balls if they joined my team.

The prankster was identified. (Well, my students ratted him out.) I blocked the door and wouldn’t let them leave class until they told me.

The best part? I didn’t even know the kid.

Water Polo Was My Instant Obsession

Eleven years prior, I was a high school sophomore who needed a fall sport. A girls’ water polo team was starting, and I joined knowing nothing about the game. Within a week, I had fallen in love. Water polo combines the strategy and speed of basketball, the grace and power of swimming, the challenges of soccer, and the physicality and brutality of ice hockey. I was immediately a student of the game. Everything that I did began to revolve around water polo. I obsessed over strategy, filling my notebooks with plays, the X's, O's and arrows dominating the hastily scratched details about literary terms and Biblical allegory.

I only knew two things for certain as a teenager: One was that I was absolutely going to turn into my mother; the other was that I needed to play water polo in college. The former was a given, and I came to terms with it early in life. (There are worse things that could happen.) The latter was a little more difficult to achieve. Water polo was a relatively unknown sport on the East Coast back in the early ‘90s. There were only four women’s varsity teams in the nation—all but one of them in California—when I applied to college, and women’s college water polo was still governed by USA Water Polo, not the NCAA.

When I was a senior in high school, we played a tournament with college coaches in attendance. Since women’s water polo at the university level was technically a club sport, and not a full-fledged varsity team, they could talk to anyone at any time. I knew from my first conversation with my eventual coaches that I was going to play for them. I filled out the school’s application in my hotel room. For the next few months, they called religiously, afraid that I would choose another university. I was the first recruit in the team’s short history. “Recruited to play” was a phrase that showed up after my name in the local paper, my school paper and on every letter from my new team. So, of course, when I arrived for my first day of college, I followed the pack of recruited athletes to special meetings while every other freshman attended mandatory orientation sessions in buildings without air conditioning.

The Shame of Being in a Second-Class Sport

Imagine my surprise when water polo wasn’t in the paperwork at the orientation for varsity athletes. Panic rose from the pit of my stomach and settled in my throat—thankfully because it forced me to keep my mouth shut. As the pieces fell into place—club sports, no matter how good they are, aren’t varsity—I waited to get discovered for being the loser who thought she was a college athlete. Eventually, I realized that not only was I not getting priority registration at this meeting, but I also wasn’t getting registered for classes at any other meeting. Terror took over. The man in charge wanted us to raise our hands when he called out our sport. I couldn’t get out of the room, so I did the next best thing. I waited until he named a sport and no hands went up. Casually, elbow on the desk and with my best affected teenage look, I elevated my left hand to about 45 degrees when he called out, “Swimming?” It couldn’t have been more perfect. For the next 30 minutes, I created a lie that I ended up not having to use: that I had decided to play polo before swim season started and I loved it so much that I quit college swimming before I even began. Crisis averted.

USA Water Polo was instrumental in developing women’s water polo across the country, and by the turn of the century, Title IX provided more and more opportunities for high school girls to find varsity teams. That sounds crazy. Back when I played, women were still fighting openly for equal representation. My university supported us financially as a club, enough to cover tournament fees, transportation needs and hotel costs. We had shitty pool time (practice ended at 11 p.m.) and no on-campus perks, but the school newspaper wrote about us, and our trophies and plaques were in a glass case by the pool.

I competed year-round because there was always a fall tournament somewhere. I practiced every day with our men’s club team, and in addition to being pressed up against their wet, sinewy swimmers’ bodies for four hours a day, I got to learn about the game from guys who were bigger, faster and stronger than we were. They never cut me a break because of my gender. Those guys expected me to hang with them or get out—and I got better every day because they let me stay. They were also the best friends in the world.

“”
I didn’t spend all those hours practicing with the men’s team for nothing.

Water Polo Has Had to Struggle for Respect, but We've Found It

It may have only been a club sport, but water polo provided me a varsity-level experience. Throughout college, I played with and against future Olympians. Every Olympics, when I listen to Julie Ertel’s water polo color commentary, I have flashbacks to when I was a sophomore and she guarded me at nationals, rendering me useless on offense. When my students ask me if there’s anything in my life that I regret, I tell them that not trying out for the first women’s Olympic squad still haunts me. I’m pretty sure I wouldn’t have made the team, but trying out and getting cut would have been less embarrassing than that orientation meeting on the first day of college.

At the time, we thought that varsity status would mean respect, and our petitions to be upgraded were relentless. Now I know that while I had to purchase my own swag and live in a dorm without a kitchen and frantically scramble to get the classes that I wanted, I wouldn’t have traded my experience for any of those perks. When the NCAA finally decided to take ownership of women’s varsity water polo, I was the volunteer head coach for a collegiate club program that gave everything to me. Several years later, my university finally joined the elite. Varsity women’s teams were popping up all over the country, and club teams like ours set the stage for the development and respect of our sport—one that lives in relative obscurity when the Summer Olympics aren’t on…or until some renegade high school sophomore decides to promote your ball-handling skills for the whole school to see.

After all, I didn’t spend all those hours practicing with the men’s team for nothing.