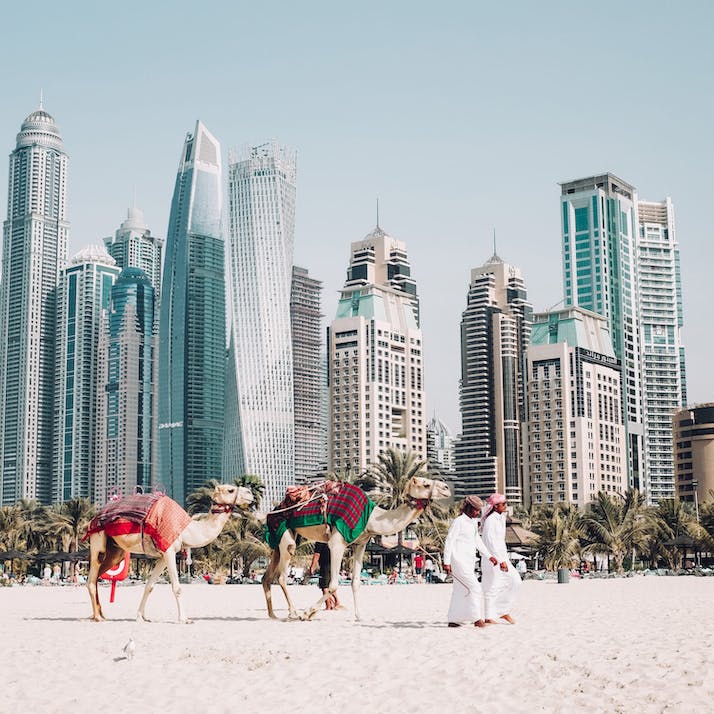 I Have Witnessed Government Surveillance Firsthand, and We Should Be Very Afraid

Despite promoting its technological innovation, a PR writer knows Dubai is still crippled by governmental oversight and oil dependence.

It begins when you step on the plane. Flashing images of Dubai as a futuristic city, emerging out of the barren Arabian desert, with sounds of loud electronica taking over the seatback screen. The branding is subtle, but it drives home the point: Dubai is a hyper-connected city, and its new image hasn’t come cheap.

In the mid-2000s, the United Arab Emirates recast itself as a budding knowledge economy, connecting emerging market countries across Africa, Asia and Latin America. The leadership was under no illusion about the long-term economic health of the country. While oil revenues have made the one million citizens of the UAE wealthy beyond conception, its oil money will eventually run dry. So, instead of investing in a reliable manufacturing sector, they pivoted into technology. Since then, the UAE has built a robust digital infrastructure designed to be a beacon for technology industries across emerging markets. Tens of millions of dollars have gone to research centers, and the Dubai government even moved to blockchain-based systems while adopting other smart city initiatives. The country now boasts one of the highest internet penetration rates in the region.

Technology’s promise of a connected world, facilitating the birth of a new global middle class, is a big selling point in the UAE. With the rise of connective technologies, emerging market countries have had remarkable economic growth over the last decade. When you walk around the Dubai airport, which is now the busiest in the world by volume, you see people from Nigeria, Kazakhstan, Uganda and Vietnam. What New York was to early 20th-century commerce and aspiration, Dubai wants to be for the coming era of emerging market growth.

Outside of offering cheap capital fueled by hydrocarbon revenue and acting as an aviation hub, the country is betting that it can be a technology incubator for emerging markets. There is talk of digital nomad visas that enable entrepreneurs to virtually set up businesses without visiting. In 2018, the country even unveiled a Ministry of Artificial Intelligence to further its commitment to cutting-edge tech growth.

“”
Dubai is a hyper-connected city, and its new image hasn’t come cheap.

There’s a Large Gap Between Rhetoric and Reality

These announcements are mostly window dressing. I know because I have been ghostwriting material for many of these agencies. I have seen just how large the chasm is between rhetoric and reality. Yet, it’s critical to bear in mind that the two largest technology acquisitions in the Middle East have come from UAE companies: Uber’s purchase of Dubai-based ride-hailing service Careem, and Amazon’s acquisition of online retailer Souq.com.

The actual effect and application of technology in the UAE is much darker. As an absolute monarchy that grants virtually no democratic rights to its citizens or residents, the UAE embodies the pernicious surveillance side of tech. The desire for information about its citizens knows no boundaries. Technology is a vehicle for repression and control.

While it brands itself as a desert Estonia, the UAE is home to draconian internet laws such as the banning of WhatsApp and FaceTime calls, and it enforces extreme punishments for any social media comments critical of the government. The quest for information on its citizens facilitates secret dealings with the Israeli government that stretch back years and have only been made official in the recent normalization agreement. Abu Dhabi and Tel Aviv have worked closely on surveillance systems designed to spy on the Emirati population and infiltrate dissidents.

When I moved to the Middle East, I never thought I would end up on the frontline of the UAE’s multifaceted technology narrative. Yet, after a decade across the region, I ended up in Abu Dhabi, framing the UAE’s narrative as a knowledge economy hub. My primary mandate was to populate stories highlighting the UAE’s commitment to the rosy side of technology’s promise in the international media. Echoing the World Economic Forum’s language, I wrote about the power of technology to build an open and inclusive society. Mixing buzzwords popular among impact investors, with concepts about the fourth industrial revolution, I wrote overly optimistic pieces that positioned the country as the leader of an enormous economic block of nations poised to take over the world with homegrown technology.

“”
When I moved to the Middle East, I never thought I would end up on the frontline of the UAE’s multifaceted technology narrative.

The country has built an impressive infrastructure, but the economy is still woefully dependent on oil revenue. Moreover, technology’s primary function in society is surveillance. Open and accessible platforms are blocked. Large portions of the internet are off-limits, and VPNs can land users in legal trouble. Can an advanced knowledge economy exist without FaceTime? No, but that hasn’t gotten in the way of the branding.

The knowledge economy narrative enables the leadership to quietly import harmful technologies designed to maintain control while publicly boasting about its tech prowess. With every new announcement of a smart city technology or AI initiative, the government attempts to draw attention from the rather obvious fact that no one has any rights. Don’t worry about how money is being spent on endless war in Yemen with no oversight because we have the world’s only Ministry of AI! Forget about Bitcoin being illegal because the Dubai government will soon be using its own blockchain to cut down on paper waste!

Surprisingly, these ridiculous bait and switch tactics work inside and outside of the country. Major international publications love to report on the UAE’s knowledge economy and seldom point out the pesky facts about censorship and surveillance. The UAE’s embrace of the knowledge economy lexicon is not an outlier. It’s merely an extreme manifestation of the positive narrative of technology’s promise to transform society for the better. In that sense, the country is becoming the tech innovator it has set out to become.