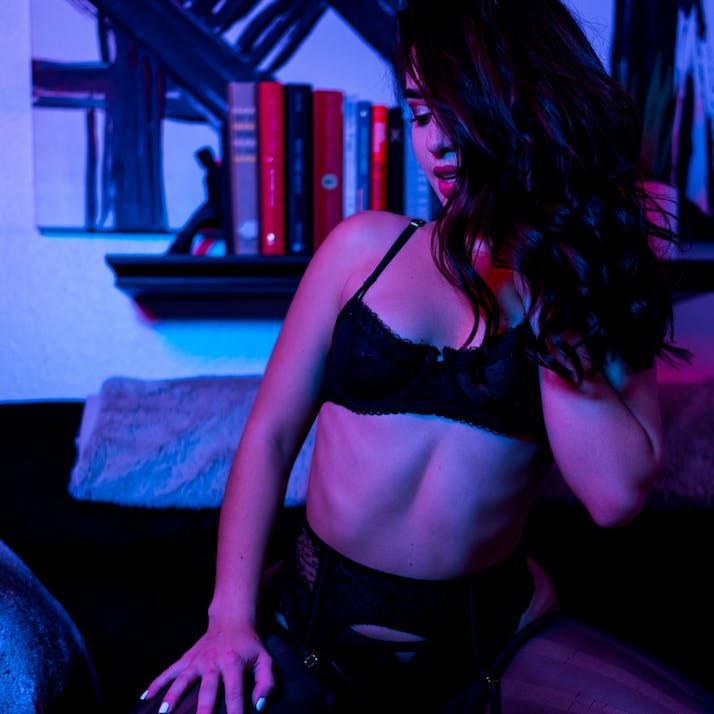 Why I Solicit Dick Pics

A female artist turns the concept of nudes on its, ahem, head.

As a female artist working a world where men profit off of the female form, I thought it was time to turn the tables. At first, I focused on empowering womxn in any way I could. I drew them, took photos of them, painted them and gave them a platform to share their stories. But men creating art out of womxn’s bodies still irritated me.

How do womxn profit off of men profiting off of their images?

What do womxn gain from being portrayed in a piece of art that comes from the male gaze? Are men giving them a platform to speak? Are these male artists lobbying for gender equality? What’s the point of them using the female form in their art? The fact that they think we are nice to look at? I mean, they're not wrong, but that doesn't give them a right to profit off of us, especially when the gender wage gap in art, and in general, is unequivocally engorged.

I Now Make Art Out of Dick Pics

I don’t have all the answers to all these questions, but I do have a way of generating conversation around a topic that’s still only barely penetrated the surface: by making art out of dick pics.

In the Art Market 2019 report commissioned by Art Basel and UBS, sociologist Taylor Whitton Brown writes, “The statistics of the past few decades confirm that the art world is not one of gender parity. Women’s artworks sell for a significant discount compared with men’s. Only two works by women have ever broken into the top 100 auction sales for paintings, despite women being the subject matter for approximately half of the top 25.”

In one of the most prominent museums of the world, the Metropolitan Museum of Art, less than four percent of the artists in the modern art section are womxn, but 76 percent of the nudes are female. As the feminist art collective Guerrilla Girls once infamously asked, “Do women have to be naked to get into the Met Museum?”

Now, if this sliver of information doesn’t start to get your blood boiling, maybe it will, knowing that out of the 18 most prominent art museums in the U.S., which hold the work of over ten thousand artists, 87 percent of those artists are male, and 85 percent are white. These proportions are discouraging, to say the least. Womxn's bodies are consistently used and sold.

Womxn Get Fucked by Men in the Art World; Now Is the Time to Flip the Script

We’re getting fucked by the art world for men to reach their career climax, while we’re not even on the brink of our full potential.

And so while I was isolated in my New York apartment during quarantine, thinking about all of this, when I started to wonder what would happen if I started drawing dicks instead of boobs.

To my surprise, people were initially into it. At first, there was definitely a noticeable shock factor that quickly wore off as I kept posting dick art—contrary to my drawings of womxn, which on average got the same amount of engagement every time. The thing was, people didn’t really want to see dicks on their feed, no matter how stimulating they looked.

Lots of people unfollowed me, I even received some hate DMs about how I was objectifying men (LOL), how these images were supposed to be private (even though I had consent from every dick pic drawn), or just from people who were “disgusted” and “offended.”

In all honesty, I felt that all the hate mail was a good thing. If I didn’t want to be controversial, I’d be posting pictures of food. I wanted to make people angry, the way I was angry. I wanted to make people see something different than what was already out there. And if they saw dick pics in another light, that was part of the goal. Turning something that to some is triggering and even hostile into something digestible.

So, how is soliciting dick pics going to do that?

“”
I started to wonder what would happen if I started drawing dicks instead of boobs.

Behold the Parade of Penises

It was my way of taking back the reins. If men weren’t going to change their behavior, if there was still going to be inequality in the art world, why should I confine myself to creating something the art world already had too much of?

Enter my parade of penises.

Let’s say outright that unsolicited dick pics are foul. Men should never send a picture of their penis without explicit consent. Being forced to see an explicit image is violating. After years of being cyberflashed, a lot of womxn are triggered by them and even experience trauma. The digital age has allowed men to be more anonymous about it, but this behavior has existed forever. Off the top of my head, I could tell you at least five stories about men masturbating in front of someone I personally know—in the subway, at a grocery store, in a parking lot—without consent.

If you think these behaviors are anything less than offensive or disagree in any way, you’re wrong. At the bottom, they’re the same thing: someone forcing themselves onto you when you have nowhere else to escape. Even if womxn send a nude first, the favor does not need to be reciprocated in the same way! (Ordering us food on Postmates is always encouraged, though.)

The first dick pic of my series came from a guy who I’d been sexting with over quarantine. It felt like a challenge. Was I capable of turning something which people considered unappealing into a digestible piece of art?

I sent it to the guy and he was impressed. I posted it on social media, and my audience was also impressed. I knew that I was onto something, so I solicited more. To my surprise, guys were interested. Some believed in my project, some wanted to be immortalized and some just liked the thrill of sending me their dicks. I wasn’t here to challenge why I was getting them. That wasn’t the point.

The point is to dismantle the power that was held in a dick pic, converting the overbearing visuals that an unsolicited dick pic forces upon its receiver, the assault that it proves to be onto an unsuspecting victim. Even though I can’t prevent men from sending dick pics to those who don’t want them, what I can do is reconstruct what a dick pic is.

Womxn have significantly less recognition in the art world, even though we are roughly 45 percent of the artists in the U.S., and earn a fraction of what men do. That won’t change unless we disrupt it. In my mind, disruption looks like something that you can’t unsee, something that creates a strong conversation about the underlying issues in our industry. Drawing dick pics seems like the most uninhibited tool I have to smash the patriarchy.