Why Are People Afraid to Use the Word 'Queer'? 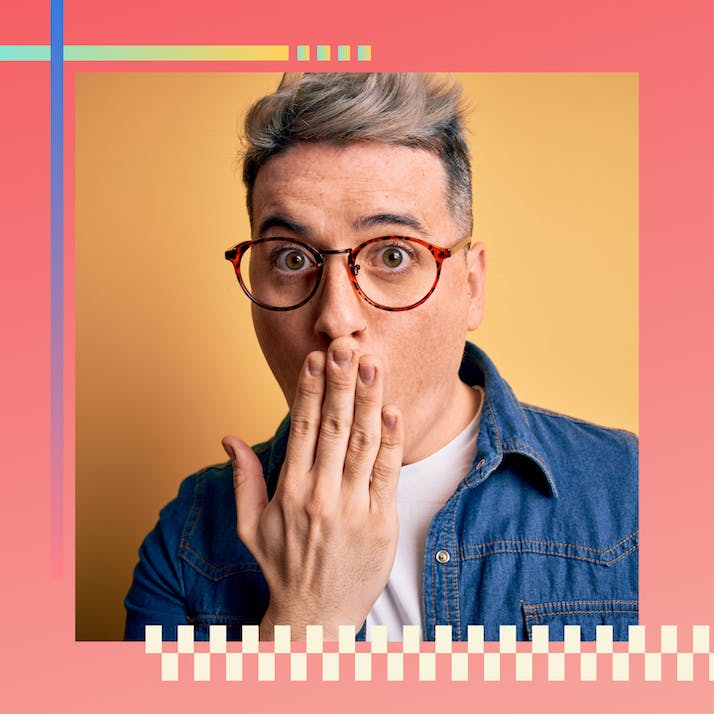 Why Are People Afraid to Use the Word 'Queer'?

My world opened up once I began identifying as queer. Today, it’s my superpower.

Kids knew I was a queer before I even knew what that meant. These kids would pick their noses while I, Queen Helpless, reigning over the kingdom of PTSD, would wait for the impact of the inevitable booger that would be flicked into my hair and onto my clothes.

My dad was no better. He'd catch me playing with my sister's Barbies and call me a plethora of names that the kids at school had already rehearsed and performed. He'd then hit me with the beautifully dressed dolls because he didn't want his gender-assigned son to be a faggot.

Coming out as gay in high school in the ’90s wasn't trendy, to say the least. I told one of my friends, and she ended up telling the whole school. Then boom, I was a different person overnight. Bisexuality was a myth back then, and nonbinary/trans folks were a disease.

So immediately, I was thrown into a gay man box and was stuck there for a decade and a half. Maybe we had verbiage like gender nonconforming or pansexual back in the ’90s and 2000s, but I never heard it.

You probably think that I want you to feel sorry for me, but I'm way beyond that at this point in my life. People tend to develop a very rough exterior when they grow up being called a sissy, a girl, a little bitch, a gaywad, a butt pirate; you name it, I've endured it. Or you take the road less traveled and you kill yourself, like so many of my friends have over the years.

I loved when school counselors would tell me, "They're just words. Don't let them get to you."

Or the popular, "Stick and stones may break my bones, but words will never hurt me."

I understand these concepts today being a 39-year-old queer, nonbinary person, but back then, these sayings would just make me feel more stupid and helpless.

Why can't I stick up for myself?

Why can't I stop these people from calling me names?

At First, I Was Uncomfortable Calling Myself Queer

I’m so grateful that out of all the marginalized communities in the world, the LGBTQIA+ is the most willing to accept you, flaws and all.

We are open and stay open because we've been through shit sprinkled with more shit. I also believe another part of that is that we accept all races, sexes and sizes in our community, which makes us stronger, more intelligent and the most open-minded.

So why did I cringe the first time I heard “queer” being used for comedy value on TV?

It was the show Will and Grace, and the notorious Jack McFarland answered someone's question with, "Tom’s queer, dear." I, of course, laughed but also knew I could never say that or wouldn't be confident enough to use a word that's been proven to be daggers in my life.

The older I got, the more I heard “queer” being used but not for comedy value. People in our diverse community started to identify as queer. I'd never say anything, but I heard each and every one of you say it. And I felt it.

These brave people were taking a weapon and turning it into a peace treaty. It wasn't until a couple years ago that I myself started to identify as queer.

When I finally accepted the word “queer” for myself, the scope of how I looked at the world changed. I didn’t have to fit in anymore to one group or theme in life. I never felt like a twink, a jock or a bear, but queer worked.

“”
These brave people were taking a weapon and turning it into a peace treaty.

Identifying as Queer Is a Personal Choice

So why are straight, cisgender people afraid of using the word “queer” to identify their child or their parent or their best friend?

Even now, I will tell people I'm queer and I get mixed reactions. Either ’cause they think what I am saying is wrong, I'm using it out of context or they just get offended, which is comical coming from heterosexuals, who typically don't know what it’s like to be marginalized or truly offended.

My best friend, who is the most lovely human being and also straight, said she wouldn't call me queer ’cause it's a bad word. It makes her sick when people use any type of derogatory term for anyone, and she doesn't have the heart to say it because she thinks it will cause more pain in the end.

Now, while I can agree to some of what she's saying, I'm telling you my singular story. That I want to be called queer, not everyone does. For me, stating that I'm queer is a superpower. I say it for the scared kids with boogers crusted in their hair, for them to know that one day, they will be safe. But that's just my story. Not everyone is the same, and not everyone wants a label. I don't speak for all LGBTQIA+ members. I only speak through my experiences and my story. Just because I want something doesn't mean everyone wants this, and it also doesn't mean people can't change their minds later down the road. I implore different people to know what they want to be identified as and tell your loved ones that.

If they don't do it, keep telling them because how will they learn? Now, if they absolutely refuse to do it, slap them across their fucking faces!

I'll let you in on a little secret. Them not fulfilling your wishes is about them, not you. Not many people like change, especially living in such a binary-centric globe.

Like my dear friend and drag queen icon Miss Coco Peru says, “If people are making fun of you and laughing, let ’em. That's the only joy they get in their day.”

Whenever I'm having a shit day, I say this mantra in my head.

Today, I'm me! Whether that's in flats or in stilettos. Today, I'm queer and fabulous and I let people know that that's how I want to be identified.

Queer or That Bitch. Whichever you prefer.