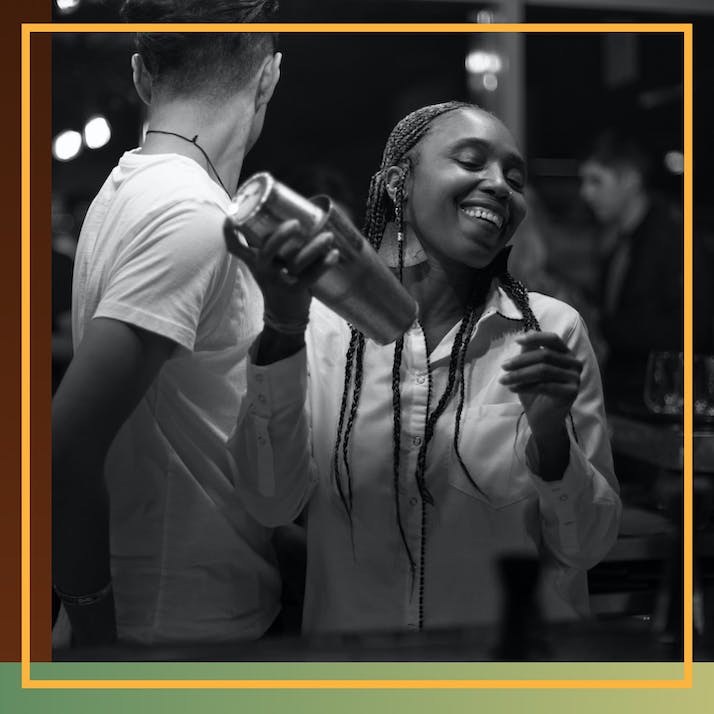 When My Life Fell Apart, Running a Bar Helped Me Put It Back Together

It was the easiest drop. Just circling through from one one-way onto another going the opposite direction. A quiet and dark back alley, a quick moment of respite from rolling around downtown. Text message. Back gate slams. Sleight of hand. Money in the bag. In and out. This bar was a top-dollar spot. Management, bartenders, catering—everyone wanted a taste. Ten birds with one stone.

How many steps does it take to go from a tenured teacher to back-gate party favor drop-offs? Probably fewer than you think. The messages keep coming in and you keep replying and the business grows. Sometimes it’s booming, until it isn’t. Just like everyone else, my number eventually came up. I found myself in an ankle monitor and a court-mandated outpatient rehabilitation program, bored and running out of funds.

“”
I wasn’t an addict—I was an entrepreneur.

Getting Busted Changed My Life

I can understand the ankle monitor. On paper, I look like someone you’d want to keep tabs on, although I wasn’t actually going anywhere. Where would I have gone? I’m not one to run away from my problems, and that kind of thing only works out in the movies. I was smart enough to know that running would have done nothing but compound every problem I had. I was also smart enough and wealthy enough to be on time to every court-mandated meeting or requirement and looking the part. Hell, when I went to pay my court fees at the courthouse, the clerk at the teller window tried to point me to the attorney's check-in. Thanks, but no thanks, lady. I was right where I belonged.

Rehab made less sense. I wasn’t an addict—I was an entrepreneur. If they had tested me when I was arrested, it might have come back positive for marijuana, maybe. I was selling harder stuff for the money and the lifestyle, not to get high on my own supply. There wasn’t a 12-step program for the kind of problems I had, but my daily attendance went a long way to smoothing things over with the court.

I was fucking bored out of my mind and dangerously close to feeling sorry for myself. I had gone from a life of adrenaline rushes and cash to being home every night by my court-mandated 9 p.m. curfew, just in time to literally plug myself into the wall for the required two hours to charge the ankle monitor. Lying around for hours every night with my leg thrown over the back of the couch, tethered to the monitor cord, was as close as I would ever get to losing my freedom. It was a recipe for self-loathing. The third-party monitoring service said the device was precise to the point that it could decipher which room of my house I was in. Not even once did I try to test that theory. I was at home in bed every night after charging and up every morning to arrive at my mandatory outpatient rehab program by 8 a.m. I put in my time listening and learning. It wasn’t a complete waste. They had doughnuts. I was definitely addicted—money was my drug. And I needed a fix. I needed a job.

Going back to teaching primary school wasn’t an option. My credentials were under investigation by the state board of education. I had a master’s in education, and outside of my detour into dealing, that was all I knew. And with four pending felonies, whether or not I could return to teaching school was the least of my worries. When I started down this path, I always told myself that I would never do anything where I wasn’t prepared to accept the consequences—but now that they were here, it was a different story.

I never heard from the board of education, beyond the certified letter I received two weeks after my arrest, letting me know that my certifications were invalid until a finding was made by the courts. It was the first time since my nights in jail that I cried. It wouldn’t be the last.

When I Ran Out of Options, the Service Industry Had My Back

I’ve always done well for myself but have never been too proud to do anything. I fell into this new profession by way of cleaning toilets, and treating it like a profession was what I did. I wasn’t above stocking shelves at Target for minimum wage or selling overpriced, mass-produced clothes to women at the mall, but I had a feeling it would be difficult to explain the pending possible life sentences and the lack of ability to set a schedule as a result of rehab, monitor check-ins and court-mandated appointments with my case officer. I didn’t need a corporate-stamp-of-approval type of job. I needed a friend. I found myself in a familiar back alley, walking through a familiar gate.

I had never worked at a bar before that or had any other official experience in the service industry. You could certainly call what I did before I got caught a “service,” but in that line of work, your hours were dictated by the phone, the customer was never right and people knew exactly what they needed. I’d never held a tray. I’d never taken an order. I’d never made a drink. But the bar needed a manager, and I needed a job that knew my backstory and wanted me anyway. It paid well and even gave me an allowance to sort out my own medical care. Perfect.

It was better than perfect, actually. It was exactly what everyone needed. I was used to getting up in the morning and being productive during the day. It was a habit I couldn’t unlearn, no matter how hard I tried, so I became the bar’s morning person. The seasoned trolls could hide under their covers until dusk. I would come in bright-eyed and bushy-tailed, fresh off two doughnuts and a morning of self-reflection, and open the place up. I would handle meetings and venue tours for private events with a smile. I accepted deliveries of booze and wine and beer and fruit. I wrote checks. I scheduled bartenders and barbacks. I negotiated referral percentages with event planners and catering companies. I handled visits from the fire marshal and the health inspector. I returned emails and sold the venue like a pro.

It was nothing I had ever done before, but it wasn’t rocket science. If I could handle a class of 22 primary school students back in what seemed like some whole other lifetime, I could certainly handle a few bartenders, drunken patrons and high-maintenance corporate clients. After a year and a half, when it was time for me to move on, the GM told me I was the best manager he’d ever had.

“”
It was the first time since my nights in jail that I cried. It wouldn’t be the last.

I Found My Redemption Behind the Bar

The unofficial patron saint of the service industry, Anthony Bourdain, once said, “In America, the professional kitchen is the last refuge of the misfit. It’s a place for people with bad pasts to find a new family.” While not exactly a professional kitchen, I learned what a cambro pan was and how to cut limes in half the time it would take someone off the street. I learned that if you smile big and talk sweetly to catering companies, you can gain 10 pounds in a year. I learned how to say “behind” when walking behind the bar, and I even learned how to make a drink—not that I was around long enough to be any good at it.

The misfits loved on me. They were patient with me. They showed up for me at the last minute when the courts changed my dates and times unexpectedly. They laughed at my hairy ankle when my monitor was removed. They bought me my favorite cookies and smoked me out when I graduated from my rehab program. They were my family. They took me at my most broken and vulnerable and put me back together.

These people saw me through one of the most difficult challenges of my 36 years: the death of a life I knew I would never be able to return to. My attorney was able to enroll me in a program that made it all go away. He made sure I understood that this would be my one and only get-out-of-jail-free card—for life.

My experience has taught me that if you are looking for a place full of nonjudgmental people willing to take in broken souls, it might not be in a community center basement 12-step program. The kind of love and acceptance I needed was found behind the bar.

I haven’t been back in a kitchen or behind a bar since that year and a half. Some things just can’t be recreated. Maybe that was all the time I needed to learn the lessons I was meant to learn.