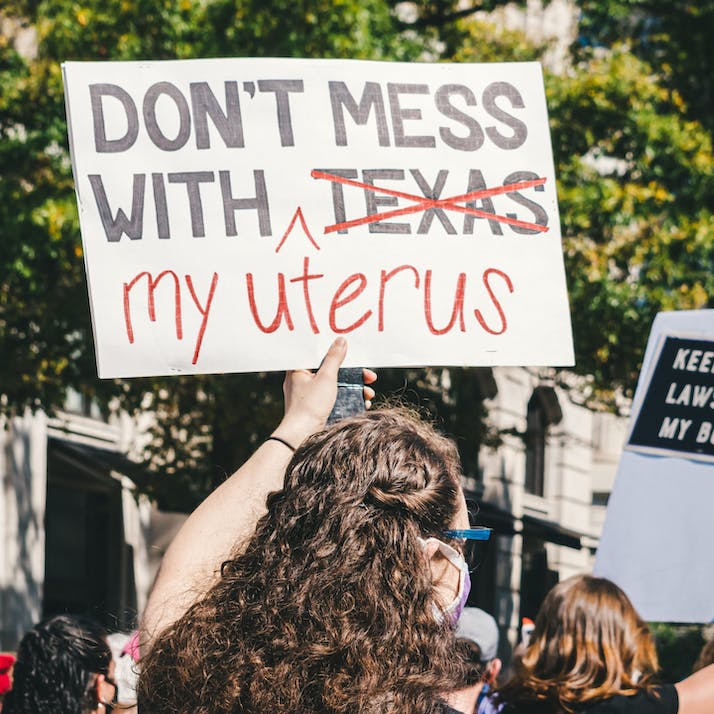 I Grew Up in Texas: Here's What Our Abortion Laws Will Soon Mean for the Rest of America

I went to an abstinence-only school, where students are never taught about sex and the real-life implications that come with having it.

When the court document that signaled the overturn of Roe v. Wade leaked—like a large portion of the country—I was heartbroken. It wasn't only about the thought of losing abortion access. There's a vast amount of misunderstanding amongst members of my community that I feel still drives the pro-life argument.

I grew up in a rural, fire-and-brimstone Texas small town. I attended church three times a week, volunteered consistently with the youth group and even read the Bible for the congregation on Sundays. Many people who have never been around or exposed to this lifestyle are still aware of some of the restrictions parents place on their children: no cursing, no caffeine, no passwords. What most people don’t know is the dark underbelly of how religious institutions and conservative environments prey on naive girls’ lack of sex education.

In Texas, it is not only optional to provide sex education in schools, it’s illegal to provide sex education in a public school that is not abstinence-only. That means that students are only taught the dangers of sex without learning the actual mechanics or protections surrounding it. My teachers told me lies such as “every time you have sex, your oxytocin levels get cut in half, and by your third partner, you are incapable of loving someone.” They put duct tape on our arms and ripped it off, telling us that’s what it felt like when you had sex with someone and they left you. They even put a bedsheet on the floor, made our entire class sit on it and told us that if we had more than one partner, we would be sleeping with everyone in the room.

I finished sex education without even knowing what a penis was or what it meant to have a period. I was 15. My experience is not unique. I have talked with many girls now about the sickening sex “education” they received in religious, conservative environments. I remember turning to my parents and asking for clarification, but all I received was a scolding for asking. I was told eventually that God would bless me with a child.

“”
What most people don’t know is the dark underbelly of how religious institutions and conservative environments prey on naive girls’ lack of sex education.

I find it hard to describe to people how dangerous this situation is. I could have been raped not only without knowing what sex was but without the vocabulary to describe the anatomy involved with what happened. Yet people wonder why the rates of rape, teen pregnancy and STDs skyrocket in abstinence-only states. None of the results of this type of education or upbringing is positive, so why do lawmakers consistently advocate it?

Many people also don’t realize that abortion bans were not a political issue until post-segregation. In 1968, when it lost the battle with Brown v. Board and needed a new platform to politicize, a group of Southern Baptist lawmakers removed integration as an abomination against Christ and replaced it with abortion, except in the cases of rape or incest.

The abstinence-only education, the rules to “protect” our innocence, the lack of birth control—they don’t prevent unplanned pregnancies; they cause them. Rather than having the hard conversations surrounding sex necessary to keep abortions from happening, pro-lifers and conservative groups turn to ban them, leaving women with the options to have a child they aren’t prepared for, dump the child into a crowded privatized foster care system or put their own health at risk to terminate the pregnancy without a doctor.

The belief that banning abortion is the best way to end abortions is like banning cars to end car accidents: It's not realistic, and life-altering accidents still happen. But for the sake of argument, let’s imagine a world where these are our only options and abortion (even in cases of rape or incest) is completely illegal.

Out of all industrialized countries, even with proper medical attention, the U.S. ranks last amongst industrialized countries in maternal mortality rate and Texas has the highest maternal mortality rate in the U.S. There are currently around 400,000 children in the foster care system. Private placement agencies get a check whether kids are placed into a safe home with funding or not. This means that foster youth are 2.5 times more likely to get involved in the justice system.

When Roe was passed, the crime rate dropped significantly (around 47 percent) 20 years later because children were not being put into unfit or dangerous homes. There are, in fact, more couples that want to adopt than there are children in foster care, and many are LGBTQ+ couples. Just last year, the Supreme Court defended a Catholic adoption agency’s right to discriminate against gay couples wanting to foster, making the foster system unnecessarily more crowded.

If the mother decides not to put their child in the foster care system, she will not have universal healthcare and face food insecurity as social welfare programs continue to be unsustainable fixes to larger issues. If a person decides that they don’t want to raise a child in either of these conditions, it is certain they will take matters into their own hands and there will be an over 20 percent increase in pregnancy-related deaths.

“”
The belief that banning abortion is the best way to end abortions is like banning cars to end car accidents.

The debate around pro-life and pro-choice is arguably one of the greatest political marketing tactics ever created.

The truth is, there aren't many people who are pro-abortion: Logically, we are all on the same side. No one wants a world in which their only options for an unplanned pregnancy are giving up their own life and scarring a child because they’re unwanted or putting them into a system that has no support for their physical, emotional or mental well-being. The statistics and research show clearly—for the life of women, codify Roe. For the life of children, codify welfare.

I stood outside the Supreme Court this week, protesting for my rights; I couldn’t help but notice the pro-life side where I once stood and where many of my friends and family still side. If you’re a pro-lifer and you believe that abortion is murder, that’s fine. I don’t have any desire to try and change your mind. But I do beg you to ask yourself: What is the state of our country if women would rather commit “murder” than bring up their child? And why aren’t you doing more to change it?

More than anyone, I want to end abortion.