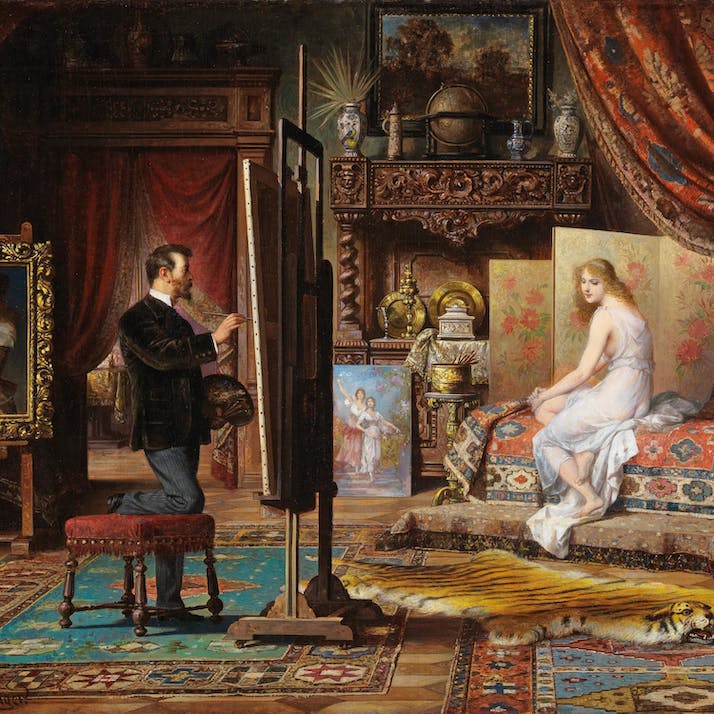 What It's Like to Work With a Master Painter

A curator recalls the experience of teaming up with a new, popular artist entering the high-rolling industry for the first time.

It was the first day of Hanukkah. I had accepted my friend’s invitation to celebrate at his home in the Upper West Side of Manhattan. It was a proverbial “who’s who” gathering in banking and philanthropy, with a very noticeable giant swaying his arms in the air as he spoke with passion about I’m not sure what. He had everyone’s attention, and captive guests encircled him, attentively listening to his every sound, bewitched by every gesture. By his appearance, I gathered he was one of my friend’s new artistic finds showing off his bravado and making a spectacle of himself. I, for one, was not amused by the loud noise. I made my way to pay respects to my host. He immediately dragged me to this giant and introduced him as the new chap in town with a great future ahead of him. My friend was quite sure of his words.

I politely offered my greetings and quickly excused myself. I didn’t want to get caught up with one more artist trying to pitch their “extraordinary talent” and force themselves on me until I agreed to visit their studio. You see, at the time, I was curating and producing some exciting exhibitions at major New York venues. Wherever I went, artists would attempt to bombard me with images or a pitch about their work, a process that can be rather tiring. I was particularly exhausted that evening and was only able to take the crowd for a little less than half an hour. Gracefully, I found our host and expressed my gratitude and said my goodbyes.

As I waited in the hall for the elevator, “The Giant,” as I will now come to refer to him, joined me at the door of the elevator and re-introduced himself. The elevator door opened and he began a conversation about nature and metaphysics. I was taken aback but intrigued enough to listen. At the time, he lived in the East Village—I was living in the West Village, so we took the 1 train downtown. The conversation was intense and multi-dimensional. By the time we reached Union Square and had to part ways, he made sure I had agreed to visit his new SoHo studio, where he would be moving in a few weeks. I was leaving for India in two days and suggested that I would visit upon my return.

“”
The Giant was the real deal, a blossoming master painter indeed.

The Giant’s Artwork Overwhelmed the Senses

Two months later, as I was going through the pages of my journal, I noticed a “note to self,” a reminder to call the Giant. A week later, I found the time to reach out and make an appointment to visit. “Oh I remember the sound of your voice,” he said, to my surprise. He showed kindness in his words and immediately I felt at peace with saying yes to lunch at his studio the next day. I must admit to you, I was intrigued by the Giant as a person, but didn’t have high expectations as to the quality of his work.

The next day, standing in front of the brownstone in SoHo, I rang the bell to the second floor. The Giant greeted me. We passed a large empty room, opened a door leading to a small corridor and entered into a larger space that overwhelmed my senses. I was an ant in a field of colorful flowers. Giant paintings, packed with texture, vivid color, endless brush strokes. It was like unearthing a treasure referencing the history of painting, I felt traces of the influence of Albrecht Dürer, Jackson Pollock, Wassily Kandinsky, Gerhart Richter, yet the work was fresh and specific to The Giant.

The work revealed brush strokes that extended beyond the enormous canvases that appeared to have no beginning or end. My eyes gushed stimulation to my brain and heart. I was experiencing a complexity of new form and color, tension between the micro and the macro dimensions of space and time. The gestures and textures caused me to feel movement, sometimes the calm of a gently flowing river,  and at others, I was thrusted around by the fury of the sea during a storm. My mind and heart felt strongly aligned and alive. As I moved around the space, I felt dizzy from a complete sensory overload. It was a new universe. A force entered me. The paintings had a clear language, they spoke to me in a way that challenged my mind and burst open my heart. My friend was right, the Giant was the real deal, a blossoming master painter indeed.

Without hesitation, I brought everyone I knew to the Giant’s studio. It was so natural to speak about the work. All of me felt alive and awake. It was like nothing I had ever experienced. This newly found enthusiasm fueled my power to inspire people to believe in the Giant’s abilities and his work. A couple of months passed and I’d been successful in adding some of his works into noteworthy collections. During a regular studio visit, the Giant asked if I would want to represent him and work with him in sharing the work with the world. You see, kind reader, until then, I had played the role of curator and had not imagined being on this end of the spectrum. I was so impassioned at that time, I agreed to do so, with one condition: I asked The Giant to stop all his side jobs and only focus on the art. I understood I was taking on the responsibility of helping him survive through this transition. He agreed, and we began what seemed like a fairy-tale journey of two souls who had found each other to support our dreams and motivate a new beauty onto the world.

“”
The Giant began to grow creatively in ways he didn’t expect.

Our Popularity and Recognition Soared Amongst the Art World

For more than ten years, we organized ambitious exhibitions, collaborations and attracted some of the most devoted collectors, connecting from the heart and committing to the Giant’s success. We hosted special dinners and events with some incredible personalities, which included artists, Hollywood stars, scientific minds, scholars, journalists and businesspeople—a real melting pot of New York. We became well-known for our holiday hospitality.

The late Ruth Kligman was one of my favorite guests. Ruth was a talented artist. Unfortunately her short love affair with Jackson Pollock, the great American abstract expressionist tainted Ruth’s career and fueled a historic controversy around the authenticity of Pollock’s final painting, which he gifted to her during the last days of his life. She always captivated my guests with brilliant stories of days passed. Ruthie was brilliant and a true femme fatale.

I recall another pivotal visit to the studio by a dear English collector. The Giant was working on the eighth painting of a series. The collector opened the door to the back studio and stepped onto a huge painting that the Giant had just finished and was laying out to dry. Luckily for us, he was quick enough to catch his foot from breaking through the canvas, it was the beginning of an exciting evening. The visit was filled with home-cooked food and meaningful conversation, and after a few hours, he left. Fifteen minutes later, I received a call from him, offering a price for the work he almost punctured that was beyond belief. I knew then that we were on the right track.

I Learned About the Real Betrayal

The Giant began to grow creatively in ways he didn’t expect. I, too, was growing in my ability to imagine the global scope of the work. Suddenly, we found ourselves in a world ruled by price tags and the illusions of fame and power. But as the artwork of living artist’s generated record sales at auction, the Giant’s heart began to change. There were rumors floating about that  “Larry,” the Jeff Bezos of the art world, could be secretly courting the Giant. After years of collaboration and supporting one another, the Giant was infected by what I believe to be greed and a desire to play the art world game. He broke his agreements with me, didn’t pay what was due, took into possession paintings that belonged to me and damaged our trust and love. The Giant left me feeling betrayed.

You might be thinking this is an “age-old story of betrayal.” I would agree with you, if that were really the end. After years of inner work, I rewrote the story of what happened in my mind and heart. I now see I wasn’t the one betrayed, it was the Giant who had betrayed his own word and commitment. Instead of disdain, the experience now provoked compassion. I often asked myself, “Why did I pour so much of myself in benefit of this amazing creature?” The answer is now crystal clear.

From the beginning to the end, I was never in pursuit of fame or fortune. My commitment and passion were born out of my connection with the spirit of the work. It spoke to me in a language that allowed me to fly, be free and imagine unlimited possibility. I did it because of the pure love and creativity I received in the process. Beyond the nonsense of the experience, I will never feel different about my vision of the Giant and his work. He is truly a master creator. Hopefully, after all these years he is living with honor and a renewed heart. As for myself, I remain light as a feather, free like a bird and powerful like the sun.