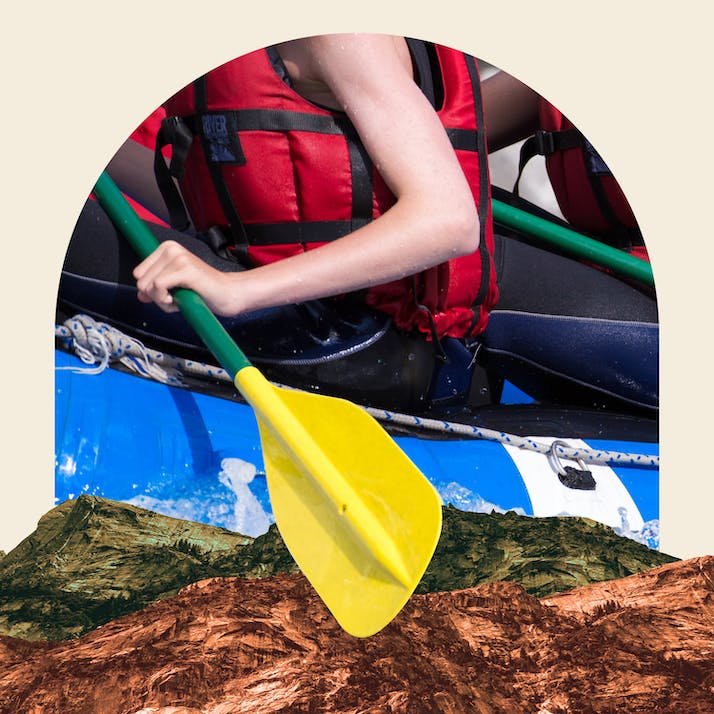 “I wanna fall out! Swim a rapid!” I’m brought back to reality as the rowdy guys in my boat talk about their ambitions for the trip. This is my last but third trip of the day and it’s past 6 p.m. I’m tired, I’m hungry and my arms ache. By the end of this trip, I’ll have rowed 33 miles today. You’d think after rowing that many miles every day, your arms would eventually adjust.

I smile at the guy who wishes to fall out, “Yeah, it’s not really that fun. I can vouch.”

All the guys laugh and talk amongst themselves about how it definitely would be fun to swim a rapid. One of them says, “Yeah, I wanna fucking flip!” He looks back at me.

I smile, politely. “Again, not really as fun as you’d think. Some rivers, that can be fun. This is a really high-volume river and all of this water was glacial ice yesterday. It’s maybe 33 to 35 degrees.”

I tell them about how a light body floats much faster in water than a raft, especially with this amount of water—how if we flipped, everyone would go flying fast in a different direction. How with water this cold your muscles start to seize up pretty quickly and you almost instantly lose your breath.

But, they don’t see this as a warning. Instead, it's a challenge. The guys probably don’t remember that we’re in Denali National Park. For a portion of the trip, we are not near a road. Or about how the closest hospital is a couple of hours away. But, my job is to keep others safe while maneuvering through rapids on a glacial river—and I think about these things all the time.

“”
With water this cold your muscles start to seize up pretty quickly and you almost instantly lose your breath.

Being a Female Raft Guide Isn’t Always a Good Thing

The person who assigned this group to me was probably trying to do me a favor. Pairing a group of rowdy, overly masculine men with the only female raft guide on the trip can be smart: she can flirt, give a big smile and receive a hefty tip in return. Unfortunately, that’s not always the case.

From the moment they came over to my boat, I could tell they were disappointed. They had hoped to have been paired with the guy with long dreads or the dude with wild eyes and a beard but instead got assigned the woman. I could also tell by their eyes and attitude that they were doubtful I could row through rapids or row at all. The top tier of the layered cake is that I, a woman, would be rowing them through the rapids, and what an emasculating experience that is. Apparently.

Knowing this, and perhaps trying to stomp my foot down to prove them wrong (anything you can do, I can do better…), I toy with uncertainty a little more than usual. Not because I want to flip, or I want any of them to swim —I don’t—but because I want to show them the force of the river. I want the waves to smack the boat and jumble these boys around. Plus, I know this river (as much as a river will allow one to know it). I know where flirting with uncertainty is OK, and where it’s not.

A Class IV Rapid Changed the Mood in the Raft

After a couple of warm-up rapids, we enter Ice Worm, one of the river’s Class IV rapids. I briefly explain our “line” to them and the river sucks us into boiling water. As far as Class IV rapids go, Ice Worm is fairly easy. It’s only rated so because swimming the rapid is especially dangerous. The moves are not hard to make in an oar raft, but if you were out of the raft you’d be sucked down, punched around, pulled every which way by the water.

“Forward two!” I yell to them, and they paddle as I row. We ride a pillow of water directly adjacent to the Mouth. I shout out to them, over the roaring rapid, pointing with my head, “That there’s the Mouth. If we went in there, it’d eat the boat alive!” The boys look over, wide-eyed, staring into the massive hole as we power by, flirting with the edges. Looking into the Mouth—a whirling vortex larger than our 18-foot inflatable raft, churning and swallowing the surrounding water—it’s easy to imagine being eaten alive.

I break their trance and yell “Forward two more!” as we punch through Liquid Linebacker, a stout, ever-standing wave. The men get bounced around in the boat and laugh and shout, elated. They’re enjoying themselves, and while they are still overly confident, with a conquering-type attitude toward the river, they have at least shut up about wanting the raft to flip. The Mouth will do that to a person.

Taking on the Toughest Rapid on the River

Soon enough comes Cable Car, the second of the Class IV rapids. I do not like to toy with uncertainty in Cable Car. In fact, I don’t like to toy with Cable Car at all. It’s my least favorite rapid on the river and makes me sick to my stomach. I get the bad kind of butterflies and sweat and I shake a little. Every day. Even if I run the rapid three times in a single day.

There are two ways of passage through Cable Car: the centerline, which is the easier of the two, and the left line, which requires ferrying across the river partway through the rapid, making your way from river right to the middle-left. I hate the right line, and I always fear that I may not make it. However, whoever is leading the river flotilla chooses which line to run, and today the guy in front wants to run right, which means I’ll have to as well.

At the top of Cable Car, there’s a hole about three times the size of the raft – a hole that even could swallow the Mouth. When entering Cable Car, you can’t let the raft get caught up in the "fun" entrance waves, because that behemoth hole is directly where the waves will take you.

I use my strength to pull the boat backward, ferrying across the entrance waves to reach the river’s left side. “Right side back, left side forward!” I yell to the men in my boat, doing the same with my oars to turn the raft around. My heart races as we glide past the hole, and I yell over the gurgling, frothing water that I’m happy we’re not in because it’s the last place on this river I’d ever wish to be. I angle the boat to ferry across the river and shout “All Forward!” over the river’s rumble with as much gusto as I’ve got.

My heart attempts to break through my sternum and I can feel my hands shaking on the oars as I stand up to get more leverage, pushing with my arms, using every bit of strength I can muster. In the center of Cable Car, there’s another hole, not nearly as big as the first, but steep and possibly more violent. I know that hole has caused many a boat's demise in this rapid. On more than one occasion, it has almost been my own demise. I know I shouldn’t stare at it—never stare where you don’t want to go, always stare in the direction you aim to head. But I can’t help it. The hole is mesmerizing. Chalky, glacial water rooster-tails up at the bottom, crushing back in on itself. The hole is utterly terrifying.

“”
My heart attempts to break through my sternum and I can feel my hands shaking on the oars as I stand up to get more leverage.

Sometimes, Being a Raft Guide Is About Teaching Life Lessons

My breathing quickens and sweat is pouring down my face as I yell again, “Keep it forward, together and hard! Use your bodies, guys!” I don’t think we’re going to make it, but there’s still a slight chance. “Come on guys! Keep it going!” Nope, not happening. We’re definitely going to hit the right side of that violent hole.

“Stop! Right side forward!” I do the same with my oar, straightening us out. The only chance we’ve got to make it through the hole right-side-up is to hit the hole head-on—never, ever, ever hit a hole sideways, every river guide learns early on. I shout for the guys to lean in, and as much as I want to close my eyes, I know I can’t, so I give one more power push as hard as I can—V for victory, we call it, arms pushing the oars up together in front of my face—as we smash through the hole. Or, as the hole smashes us. I fly forward a bit, and the guys in the front are knocked into the middle of the raft. Today, the river gods have allowed me safe passage. Hopefully tomorrow they’ll grant me the same.

After Cable Car, the guys in my boat are oddly quiet. They no longer dream of wanting to flip the raft or even swim. Instead, they seem entranced by the water, the way it rushes through the steep walls, carving through mountains.

Perhaps the river has taught them a lesson in humility.