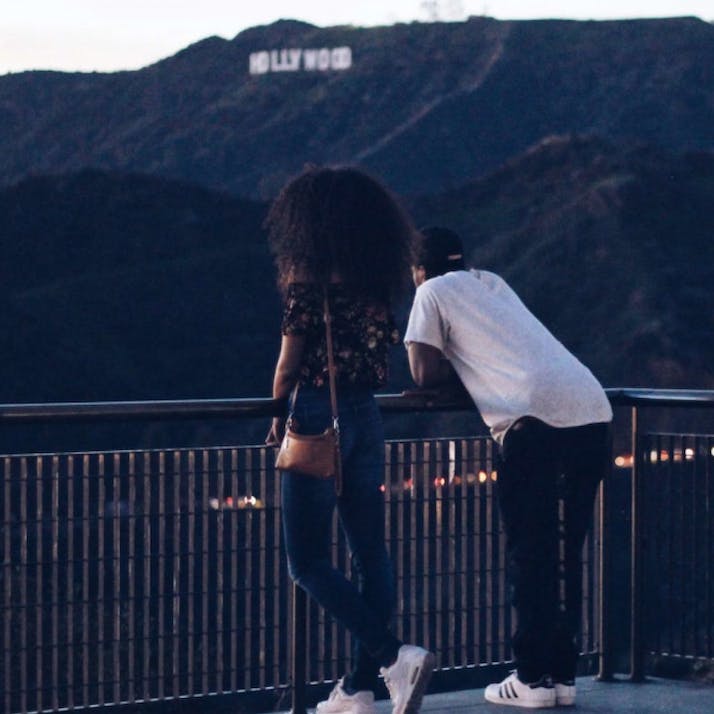 This Is What It’s Like to Date a Famous Actor

To this day, I pretend our relationship was beautiful and beneficial because I was made to feel like I’d been given a once-in-a-lifetime opportunity.

We met in a strip club in Atlanta.

He told me he liked my natural hair and that it reminded him of an African queen. Many of the women I worked with were very aware of who this guy was—and when I left they were full of questions. He hadn’t made any hints of self-importance, which I appreciated. But he was, even if I wasn’t aware, a well-known actor.

We didn’t start dating at first—it started slowly, with a couple of acting roles, a few plane rides and fancy dinners. At the time, I identified as a lesbian and had recently had my heart shattered by a woman who I’d been with for a few years. But I also knew how to handle this situation, because working in a strip club gears you up for this kind of encounter. Usually you flirt a little, and the guy comes back regularly. That was the business, that was the point. But this guy was different. He seemed like he was just there to observe. We bonded over the fact that we were both humans within a space—not of that space. He seemed like he wanted nothing from me, and for about three years it stayed that way. Those were the good days.

Indeed, those first few years were amazing. I quit my job at the club and started acting. I moved out of the city and ended up getting a larger role within a few months. I flew down to the city where we were shooting and stayed for two weeks. I barely saw him while working, but I always knew he was nearby and keeping an eye on me. He felt more like a mentor than anything else. About a year after landing that role, I was cast in a film that he independently produced. The process of auditioning for the film was long and hard, but I eventually ended up landing a different role and flying out to Los Angeles. This film would change the course of my life in many ways.

This little indie film was short and sweet. It took a day to film my scenes and I stayed out in L.A. at his guest house for a week. I met some other actors and got to hang out with them, too. One particular actor shared an intimate moment with me and though I wasn’t prepared for the interaction—and still wasn’t sure if I liked men—I went along with it out of ignorance and fear. This particular decision, however, would come back to bite me. So unaware of the world I was entering, I had succumbed to a shark and would soon be paying for it tenfold. This encounter ended how most encounters seem to end with millennials—I was ghosted. I left Los Angeles the day after feeling useless and wondering what would happen next.

“”
I went from being a regular woman to receiving VIP treatment everywhere we went.

Dating a Celebrity Had Its Glamour and Challenges

The next year, I was called down to meet the big-time actor—my original romancer—in Miami. By that point, I hadn’t worked since acting in the indie film he had directed the previous summer, and I was excited to shoot more. He’d purchased a one-way ticket for me and we spent quite a few months in Southern Florida shooting a television show. This is where our relationship rooted. When either of us wasn’t shooting we would spend time together. We hadn’t made anything official, so I was still able to do as I pleased without the “courtesy check-in.” Florida was our honeymoon phase. Things ended up going so well that he asked me to come to L.A., but I still had my own life and responsibilities. I said I would come eventually.

“Eventually” happened fairly quickly. My cousin had a wedding in California on New Year's Eve, so he attended with me and my family. That night we made things a bit more official and I ended up staying with him. I wouldn’t say my life changed overnight, but it certainly became a lot more glamorous. I went from being a regular woman to receiving VIP treatment everywhere we went.

In certain places, servers and waiters gave us free drinks or the best seats, but for the most part in L.A., things were normal. Elsewhere, it was far more extensive. If we flew to Atlanta or upstate, we’d leave from LAX, which was its own sort of trap. No matter what, I was destined to meet the paparazzi at least once, and I was never ready for them. For those who have never experienced being bombarded by strangers with cameras, it's not as fun as it seems. If you’ve ever walked through a grocery store deciding what to buy, and then suddenly come face-to-face with an ex you haven’t seen in years, it's that kind of shock. At least, for me it was. It took some getting used to, but it was my least favorite part of the entire experience.

“”
Dating a celebrity is similar to dating anyone else once you remove all the fame and the glamour.

I Still Pretend Our Relationship Was Beautiful

We continued to date. We continued to go to places and run into people he knew. Our routine consisted of auditions, workouts, pool time and L.A. adventures. One night, I decided to tell him about what happened the previous summer. At that point, I was all about being transparent and honest with my partners. I told him everything, even the part about not really wanting to do it. His response wasn’t of understanding but of complete disgust. In one evening, I went from being his favorite person to being worthless. His words, his emotions, his actions all led me to feel that way. I slipped into a deep depression. In my eyes, I had been the sun in his life for so long. Now, I was nothing. I wasn’t even worth keeping around to him, but he kept me and brought in other women to fill the gaps.

I found myself as the castaway girlfriend, the buffer for other girls who had to be nice in order to talk to him—a sort of comical gatekeeper. This wore on me, as I’m sure he knew. We began to drift apart, but we stayed together for a few months longer. When we finally did break up, and I moved back to Atlanta, I quit acting and became a standup comic.

Dating a celebrity is similar to dating anyone else once you remove all the fame and the glamour. We had our problems and we handled them poorly, just like everyone else. We had public breakdowns, seen by other famous actors and civilians. We had horrible moments that we then had to push aside for red carpet events, for the semblance of unity. Dating an actor meant me laying down my comforts to pretend with him—to pretend, to this day, that our relationship was beautiful and beneficial because I was made to feel like I’d been given some sort of once-in-a-lifetime opportunity.

The fact of the matter is you can date anyone who is available to you. But you shouldn’t. Sometimes you see a lifestyle and you go for it, head first, without knowing the cost of the endeavor. Without this experience, though, I would have never discovered what I won’t put up with. Or how to read people without even knowing them. Or that I could be brave enough to become a standup comic.