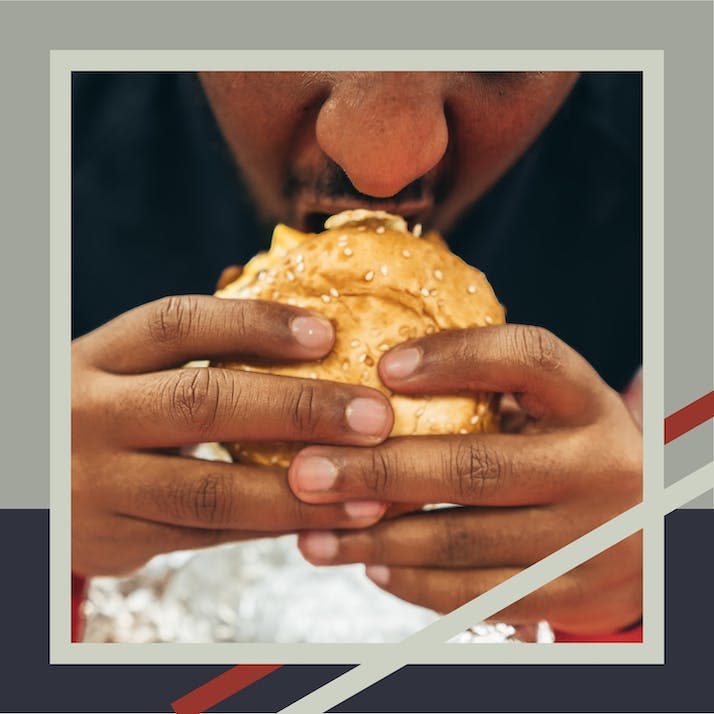 A man details his rollercoaster ride with food.

I am in recovery from binge eating disorder and compulsive eating, something that has given me a lot of demoralizing experiences and which has touched every area of my life: my body, mind, sexuality, emotions and spirit. As a kid, food was my greatest escape from dealing with my dysfunctional alcoholic family. As early as the second grade, I was stealing and hiding food, and I can still remember the shame that comes from it.

We were at my grandmother’s house, and I was eyeing the cake on the table. I had already had a piece, and my mom told me, “No more.” So when she wasn’t looking, I cut a piece and ran to the bathroom upstairs. I heard my mom coming, and I hid the cake behind the toilet on the bare floor. My mom found it, looked at me and asked, “What’s this?” I had no answer. I just told her, “I don’t know,” while inside I was embarrassed and totally ashamed. I got a lot better at hiding it after that, but I wasn’t really hiding any of it. My body continued to be the most obvious symptom of my compulsive eating.

“”
Over the course of my four years in college, I gained over 160 pounds.

Later on, in high school, I wanted a change. I got a personal trainer and went on a super restrictive diet. When I came back from summer break, it was dramatic, like one of those teen movies. I was suddenly “hot.” Girls wanted to date me, and everyone told me how amazing I looked. I allowed the joy to overshadow what I was actually experiencing. With my new weight and my new looks, people treated me differently. I thought perhaps it was because I was treating myself differently. But “pretty privilege” and fatphobia are a real thing. So is the insanity that comes with trying to keep this “privilege.”

What no one knew was that I was chewing and spitting my food out, exercising three hours a day and binging on bread before heading to the gym. I got a girlfriend, and it looked like I was having an amazing high school experience. In many respects, I was. And then it ended.

Between the stress of starting college, a breakup and my ongoing family issues, I just couldn’t control it anymore. I started to binge again. Violently. Consistently. All the time. Over the course of my four years in college, I gained over 160 pounds, and I became addicted to pornography.

This time in my life was such a blur. I walked around every day feeling ashamed that I couldn’t control my compulsive eating. I was obsessed with food and obsessed with my weight. As much as I wanted to lose weight, I didn’t have the willpower to stop my compulsive eating. During this period in my life, I really struggled with my masculinity, my manhood and my connection to my sexuality.

Firstly, as a man, I thought I should be able to control my eating, that I shouldn’t be powerless over something so simple. As men, we don’t talk enough about the mind-body connection and the deep need for men to feel connected to their body. My frame was obviously not that of a “normal” sized man, and I certainly didn’t feel like any woman would be attracted to me. I objectified my own body by picking it to pieces and body shaming myself day in and out.

So I shut my heart and my body down. While I was a compulsive eater, I was also a sexual and emotional anorexic, starving myself of some of the basic human experiences any young man can have that allow him to grow and explore who he is in the world. No one talks about this, but imagine the effects when you can’t see your own privates when you look down because of your stomach. We all deserve freedom from shame and a level of safety to explore ourselves with others in this world. When you are the one that shuts this down for yourself, you deny yourself the dignity of your own experience. You feel like less of a man, less of a person and less deserving of love.

After college, I moved to Los Angeles, where I immediately hit rock bottom. I was choosing food over shelter. I reached a point where I was living in a hotel room and using the last hundred dollars on my credit card to binge. I would go to CityWalk, the downtown restaurant district outside Universal Studios, bouncing from restaurant to restaurant to food stand. Or I would go from one drive-thru fast-food restaurant to another. The food didn’t taste good, but it wasn’t about the food—it was about not feeling.

I knew I couldn’t do it anymore. I didn’t want to kill myself, but I finally knew that I couldn’t use food to push down all the unmanageability in my life. I wanted to cut myself rather than feel the pain that I had never really learned to cope with.

Growing up, my father had found recovery in Alcoholics Anonymous, so I was familiar with the concept. I was randomly getting lunch with a friend when she shared with me a little bit about her recovery as an alcoholic. I don’t know how, or why, but I started to consider that maybe there was a program for me. I looked up Overeaters Anonymous and called the contact for a meeting. A stranger answered, and I told them I needed a meeting. I asked if I needed to bring anything. She said, “Just know you are giving yourself the greatest gift you could ever give yourself.” I went to a meeting and started my recovery journey. I found a new home in Overeaters Anonymous.

Through this journey, I lost over 160 pounds, and I’ve maintained a healthy weight for over 14 years now. Compulsive eating and recovery are no joke. It takes a lot of work on a daily basis that I have to continue to be honest about. Between being in a 12-step program, therapy and everyday life, I am confronted with the reasons I ate on a daily basis. They say if you want to know why you’re compulsively eating, stop compulsively eating. So I did. I’ve had to heal from all the resentments and hurts I’ve obtained over the years, all the hurts I stuffed with food. I had to allow them to come to the surface and grieve. I’ve had to allow myself to grieve. I’m 38 now, but at times, I’m still in many ways a 16-year-old with a lot of unmanageable feelings.

As a result of this healing, I also found my way into Sex and Love Addicts Anonymous. I’ve had to look at my addiction to pornography and my struggle to feel intimate and safe with the opposite sex. Today, I am a vulnerable, honest man who lives with integrity and grace. I do it very awkwardly and very clumsily. But I do it, and it’s imperfect.

“”
It wasn’t about the food—it was about not feeling.

We live in a world that glorifies health and wellness in a way that for many is unattainable. And let’s be honest, privilege, race, gender, sexuality and economics all play a part in one’s ability to reach those perceived goals. But now we are seeing a beautiful counterculture develop that’s pushing back. We have the body positivity movement, the fight against fatphobia and new medical perspectives that say people can be healthy at any size.

However, even in this counterculture, I have struggled to find my place and my story within the recovery community. Binge eating disorder was only recognized as an actual eating disorder when it was added to the DSM-5 in 2013. I believe we are only now starting to understand the experience.

Overeating and Eating Disorders Are About Much More Than Body Positivity

I have issues with some of the ways we’re approaching healing from eating disorders though. In my advocacy work, I’ve been told that I can’t talk about my weight loss. Or if I do, that I can only talk about it very vaguely, in order not to trigger other people. When I was at my heaviest and seeking help, I needed to know that weight loss was possible. I felt trapped in my own body, and I didn’t understand that it was manifesting the symptoms of my compulsive eating. I thought I was just a failure with a weight problem. But when people shared their experiences with me, I knew I wasn’t alone.

The truth is, body positivity alone isn’t eating disorder recovery. Wanting to lose weight does not make you fatphobic, and each individual has a right to decide what role “health” is going to play in their lives. As a compulsive eater, my biggest flaw was my people-pleasing. I stuffed my feelings because I just wanted to be loved, because I didn’t love myself. And even in recovery, I can find ways to beat the shit out of myself.

So I’m letting it all go. Appearing healthy is so much more than my looks or my blood pressure. Where am I mentally, emotionally, spiritually? Be willing to define that truth for yourself, and be honest about whether it is working for you. I don’t subscribe to body positivity for myself. I prefer body neutrality. I’m not always going to feel good in my body, and that’s OK. Those feelings allow me to connect to other issues that might be going on. My body and my desire to stay at a weight that feels comfortable for me does not make me fatphobic. It just means I’m having my own experience.

We live in a culture that constantly promises the next big thing, whether it’s diet culture or even recovery culture. But I’m telling you, the next big thing is when you say “fuck it” and define what’s best for you yourself. What brings you peace? What keeps you balanced? What allows you to connect with you? That’s an obsession I’ll stick with—because everything else is just a distraction.

Get Well SoonBread and Butter