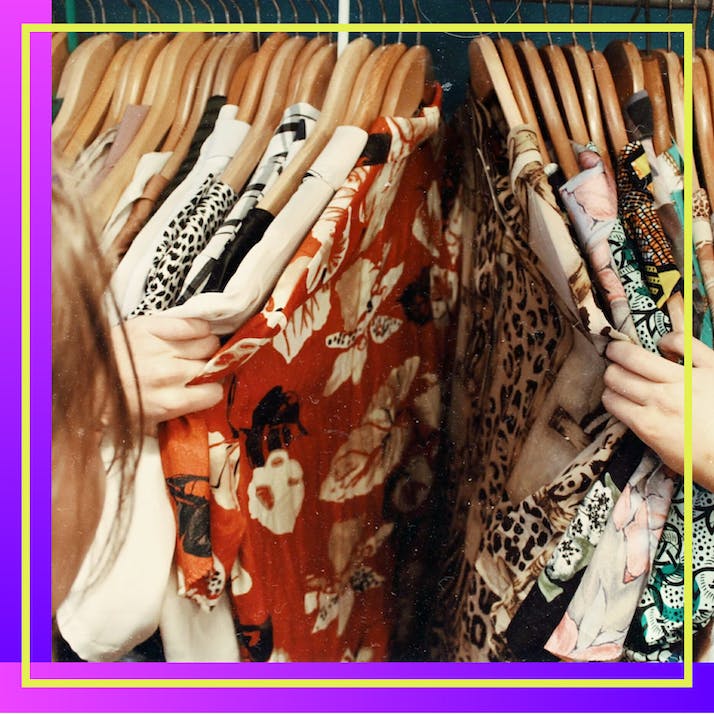 What Compulsive Shopping Taught Me About Body Image

Buying all the things taught a woman a lot about herself—and life.

Everyone’s had the experience of absentmindedly putting candy into a grocery cart right before you check out, or of indulging a particular physical craving—whether it’s for Thai massage or pad Thai. Everyone, I would also say, knows the gray area between what he wants and what he can get. It’s one of the major disappointments of adulthood to make peace with the fact that you’re not likely to ever have a beach house or a private plane or a high-end designer wardrobe—all of the luxuries you once assumed were yours for the taking. Life simply doesn’t work that way. You start out with a certain amount of money, and you can make more money, but it’s incredibly hard to make so much more money that you land in a different caste, one that flies private, buys Versace by the armful and owns houses galore.

“”
Then the need grows until it becomes insatiable, demanding the things you want.

For Me, Compulsive Shopping Turned Into a Coping Mechanism

I’m not one of those people who have changed my station. If anything, I think my husband and I are steadily sliding back down the class ladder. We both work solidly white-collar jobs (though often contract or freelance), but we can’t get ahead of our expenses. We’re always out of sync, waiting for a paycheck or my student loans to buy our dog her fancy food or pay rent or get the books I need for school next semester and the bookcases to shelve them.

Compulsive buying behavior starts out small and innocent, with an interest in maximizing your money so that it’s not all soaked up by things you need. Then the need grows until it becomes insatiable, demanding the things you want. When I’m sad or bored or restless, I take inordinate pleasure in hunting my prey online, from screen to screen, from list to shopping cart. This particular kind of shopping is challenging enough to be absorbing—I really do get into a zone, just like I do when I’m writing—but not so expensive that it feels totally wrong. What’s the object of my desire? Vintage dresses, mainly from the 1960s. In fact, I have so many I’m planning to start my own online store to resell them so that I can profit from my past mistakes.

To buy clothes is to confront your body, which is not something that’s always been easy for me. I’d say it isn’t for most women, because of the messages we are bombarded with from the time men could find us desirable. We’re told from a young age—way too young, I suspect, to fully comprehend what we’re hearing—that we need to maximize our desirability in order to attract and keep the male gaze. No, I haven’t fallen down a well back to second-wave feminism. I absolutely mean the male gaze. It is a real thing, and if you doubt its existence, I’d wager you’re either a woman who admirably doesn’t give a fuck. Or you’re a man.

Because I take a lot of medications, my weight has fluctuated by as much as 80 pounds over the years. That means that I’ve been many different sizes. Each one feels different, and each inspires a different kind of shopping. When I was fat, I suffered from intense self-loathing, so I bought myself nice clothes as a kind of compensatory act. At times like the present, when I’m thin, I buy dresses because I want to showcase my body. This complex relationship to one’s size is incredibly common among women and incorporates the messages women get from society: that to be thin is to be virtuous, while to be fat is to reveal yourself as slovenly and gluttonous.

There are dormant periods when I’m occupied with other things and I feel okay about myself, and the shopping abates. But when I don’t feel okay—and I’m a person with a major depressive disorder, so that’s fairly often—I find myself back on Etsy and eBay, cruising, hunting.

“”
To buy clothes is to confront your body, which is not something that’s always been easy for me.

The Origin of My Compulsive Buying Habits

This behavior began when I was at a miserable office job with Orwellian overtones, answering phones before the third ring and email in real-time. I made six figures, but it was horrible, so eventually, I quit. I didn’t quit shopping, though. I just sank myself into credit card debt from all the shift dresses, coats with fur collars and knockout polyester numbers that I couldn’t help but buy. Technically, I’m still in that debt. I just stopped paying my bills when I moved to another country.

There are two kinds of problem shoppers: impulsive and compulsive. I wasn’t sure which one I am, so I looked it up online. I’m compulsive, as it turns out, since there’s an involuntary aspect to my behavior. A compulsive shopper will plan the shopping experience—as opposed to buying on a whim—as a way to avoid or relieve uncomfortable feelings like anxiety. Compulsive shoppers are also more likely than impulse buyers to experience negative consequences as a result of their shopping, such as financial difficulties or conflicts with family. They’re also more likely to fall into a cycle of addictive behavior, in which they shop more and more in an attempt to stave off the stress and anxiety caused by their out of control shopping.

I recognized myself in this description immediately. I knew the displacement of anxiety (another condition that I’m medicated for), the not giving a fuck about how your spending looks to anyone else. Eventually, though, you run out of other crazy people (i.e., people obviously crazier than you) to use as straw men, so you lean into the addiction metaphor. It’s a handy explanation and it fills all of your cavernous emotional holes: You shop for love, you shop for attention, you shop to make yourself feel better and, eventually, all of the shopping just makes you want to shop more.

But calling it addiction still feels like somebody put you in the wrong math class. You don’t belong here with the degenerate gamblers and the young, earnest day traders, the old women who overspend on QVC, and the young women who just overspend. You imagine sitting in a meeting in some shitty room in a church basement, with lousy coffee and those pathetic strangers. You want to be better than that.

The Cause of My Compulsive Shopping May Be Rooted in FOMO

One of my favorite storylines in The Sopranos is right at the beginning. Tony is upset when the ducks who’ve spent a few days of their migration in his backyard eventually fly away on the next leg of their journey. He’s sad or feeling something scarier that he’s just calling sadness. Dr. Melfi asks him whether he’s afraid of missing something, or of seeing something that would sour him on the birds. “Missing something,” Tony says, and he talks about loving those birds in a way his wife Carmela surely longs for him to talk about his children.

But this is cruel optimism. Tony’s hopes and dreams for his kids are only within the realm of his imagination. He’s going to be missing something no matter what kind of lives they choose, just as I’m going to miss something as soon as I put the computer away and stop slobbering over the many, many things I want (need?), like new glasses, comfortable sandals, a lot of work done on my hair, a few more bookshelves.

And dresses, like the one I checked out in the middle of writing this paragraph when my mind wandered. I think I’ll go back and have another look.

What She SaidMade You Look