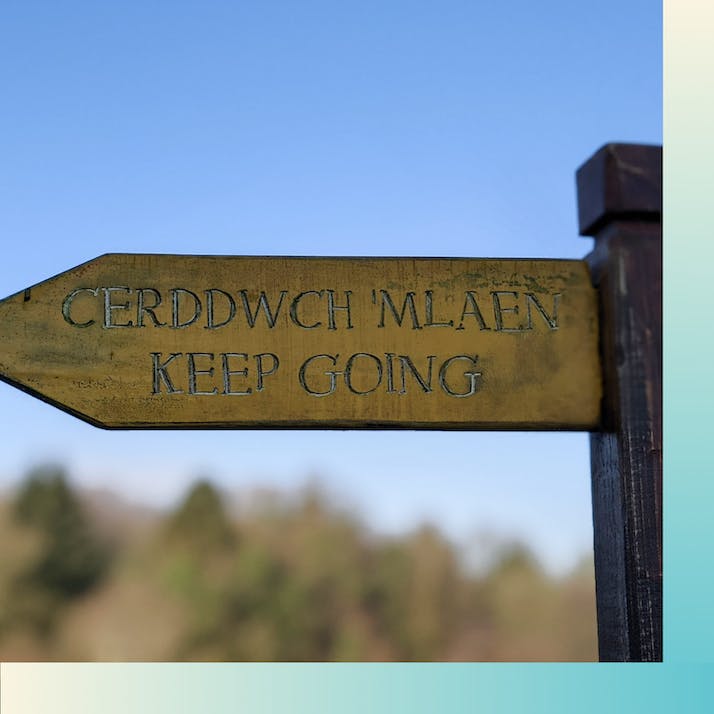 I grew up speaking Welsh, but the language continues to be diminished and criticized as gentrifiers take over the island.

Last night, I was browsing social media when I came across an image of a spot known to me as Ynys Llanddwyn. The tidal island is synonymous with Dwynwen, the Welsh patron saint of lovers. The poster—an Englishman—had tagged the spot “Lovers’ Island,” dubbing his version “more poetic” when pressed by locals.

The rest of the world knows these isles as a United Kingdom, but what they may not realize is that Wales became an English colony way back in the 13th century. “Cymru,” the native name of our land, refers to “friends” or “fellow countrymen,” while Wales derives from an Anglo-Saxon word meaning “foreigners” or “outsiders.”

As a kid, I watched cartoons and bickered with my brother in Welsh. My classmates and I recited the Lord’s Prayer in Welsh. When a boy broke my heart, I cried to my mam in Welsh. Today, I communicate with my colleagues and thank my bus driver in Welsh. I tell my hairdresser my holiday plans and speak to my grandparents’ grave in Welsh. I make love in Welsh.

But in 1536, Henry VIII's Act of Union named English the only legal language of this land.

“”
It may now be recognized as a bilingual nation, but Wales has had to fight for its rights.

In 1847, a school report known today as the Treachery (or Treason) of the Blue Books (and written by three Englishmen) blamed the Welsh language for stupidity and insolence, even taking the opportunity to attack the sexual morality of Welsh women. In 1870, an education act stated that children must be taught in English only. Between the 18th and 20th centuries, schoolchildren caught speaking their mother tongue were forced to wear a heavy wooden plaque around their necks. The child found wearing the plaque—reading W.N., or Welsh Not—was physically and psychologically abused.

Generations of children missed out on a life of bilingualism because parents made a conscious choice not to pass on the language. And it wasn’t only the rights of schoolchildren that were disregarded.

In 1965, one of Wales’ last exclusively Welsh-speaking communities was drowned to provide England with drinking water. This brings us to the present day, with the 2020 Annual Population Survey putting the number of Welsh speakers at just 29.1 percent. Despite the Celts existing on these shores long before the Anglo-Saxons, the highest echelons of British government still refer to Welsh as a foreign language, taking umbrage when an MP wished her House of Parliament colleagues a happy St. Patrick’s Day in both Welsh and Irish.

The London-centric British media, meanwhile, flits between treating Welsh as the butt of jokes and with outright contempt. On UNESCO’s International Mother Language Day, a Sky News presenter questioned whether Welsh is the world’s most pointless language. One of the U.K.’s most respected travel journalists, Simon Calder, chose a flight to our capital of Cardiff to ponder the necessity of bilingual announcements, attempting to draw a correlation between the "extra guff" to wade through and plane crashes.

A recent travel listicle deemed it worthwhile to share with the world our most “Unpronounceable Welsh Town Names,” while another respected travel journalist asserted we don’t deserve to reclaim the native name of our tallest peak lest we had the audacity to build a cafe on top of it.

Then there’s the National Health Service boss, who compared treatment of non-Welsh speakers to that of Black people during South African Apartheid, while the boss of a national supermarket chain referred to the language as “gibberish,” having previously called it a “dead language that sounds uncannily like someone with bad catarrh clearing his throat.” Oh, and not forgetting the wrongly jailed postmaster who was prevented from writing letters to loved ones in Welsh.

Wales Has Always Had to Fight for Its Language

Welsh-speaking communities are being decimated as young locals are priced out of the towns and villages they grew up in, while holiday homeowners rarely bother learning our language because everybody speaks English anyway, right? Historic property names are lost in favor of twee, Airbnb-friendly titles; as I write this, a home named Fferm Tan y Mynydd, which translates to Farm Beneath the Mountain, has been renamed Forget Me Not Cottage.

And after all this, we’re meant to be grateful. “Don’t bite the hand that feeds you.”

It may now be recognized as a bilingual nation, but Wales has had to fight for its rights. The reason we have bilingual government documents is because activists refused to pay an English language tax bill, going to court a dozen times in eight years while losing their possessions to bailiffs and even enduring jail time. The reason we have bilingual road signs is because Cymdeithas yr Iaith Gymraeg (the Welsh Language Society) took it upon itself to deface and remove English-only signs. Our Welsh-language television channel exists largely because an activist threatened to starve himself to death. And even still, Brits complain about this “waste” of taxes. As if we don’t pay our own.

“”
My culture is not a story to be erased.

I don’t expect my bus driver to speak Welsh, and though I live in a predominantly English-speaking suburb, I still trill “Diolch!” at the end of my journey to demonstrate that Welsh is a living, breathing language.

A person who knows me through the medium of English will never know me at my very core. I am nostalgic for a time I never experienced—a time when I wouldn’t have had to justify the existence of a language I use to interact with the world.

My culture is not a story to be erased and forgotten.