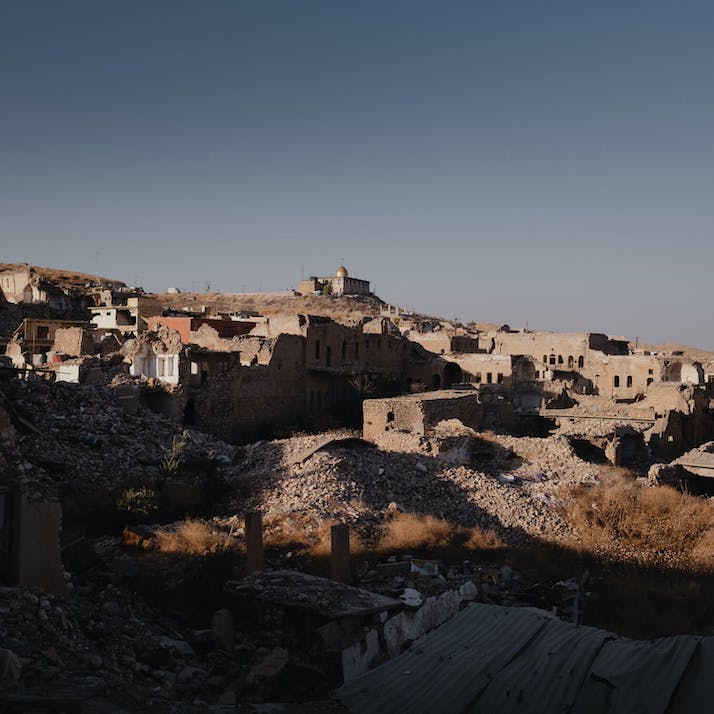 A U.S. soldier strives to protect the “mayor” of his home away from home.

It’s 130 degrees out and I’m wearing body armor, which includes this new triangle flap they’ve given U.S. soldiers in Iraq. You attach it to the bottom of your vest so it covers your groin. Every time I sit in a Humvee, I tuck my flap in just so—because I believe that when this truck goes up like a piñata, the flap will save the goods.

We’re parked. We’re outside of a giant apartment complex. It has about 200 buildings, four or five stories each. Squalid. Packed. Some of the buildings have families living in the stairwells with little mattresses and curtains.

We’re waiting because my commander is inside talking to the Mayor.

He does that a lot because the Mayor is our informant. He tells us about IEDs: roadside bombs. He tells us who’s been planting them and where they’re going to be.

I don’t get to talk to the Mayor, which is for the best. My commander is much better suited for this kind of thing. One reason is that my interpreter, “Lee,” doesn’t speak much English. He’s also overweight and asthmatic and whenever anything urgent happens, I can look back at him through the spinach green of my night vision goggles to see him lying on the ground, frantically taking hits off his puffer. I curse at him and he scrambles to his feet, but his helmet is too big and he can’t see where he's going.

The Mayor tells my commander that he, himself, is going to be assassinated this week. One of the things that makes the Mayor such a good informant is that he knows everything that’s going to happen in our city. He doesn’t know where, or how, but he knows that this week he’s going to die. And he’s not running away.

“”
The Mayor tells my commander that he, himself, is going to be assassinated this week.

This War Story Is All About Location

But, among that rubble is the foundation for an industrial facility, and there are investors from Europe who want to turn that rubble into a tractor factory. This is why the Mayor informs for us. The IEDs that are blowing us up by the truckload? They’re also scaring the investors.

So the Mayor is going to hold his ground, we are going to patrol, lie in ambush, raid houses, search vehicles. Destroy the enemy! Only that’s really difficult because we can never find them. They plant their bombs in potholes, hollowed-out trees, garbage, animal carcasses. They detonate them with tripwires, pressure plates, radio signals, washing machine timers. Everything we do to intervene against them requires that we walk and drive around, exposing us to more.

“”
I see a mushroom cloud rising from above the apartments.

Fast-forward a few days. We’re just back from a mission: a foot patrol through the market at a busy time. Some of my soldiers are outside using diesel fuel to burn our trash, our shit and some dogs they had to shoot. I see my friend, Josh, from third platoon. His wife gave birth about a year ago and he got to go home for two weeks to see the baby. I ask him, “Do you ever catch yourself remembering that you’d forgotten that you’re a father and you have been for a year?” He says. “Absolutely. All the time.”

An explosion. I see a mushroom cloud rising from above the apartments. We scramble to get our gear on. We assemble into a wedge formation and start striding over there. That’s what you do when there’s an explosion: You go closer to it, not farther from it.

Thousands of people are streaming out of the apartments to see what happened. It looks like the explosion took place near the Iraqi police checkpoint. We’re getting closer. The crowd is growing. It’s as though all 200,000 of them have us surrounded. We’re getting close now and the smoke is starting to clear. It’s right at the police checkpoint. I see bodies: black, charred, skeletonized, mouths agape. In a pickup truck: also charred, black and skeletonized. I recognize the frame of the pickup truck as being a lot bigger than the Bongo-style trucks that most ordinary Iraqis have.

The crowd is getting really overwhelming now. I have 20 guys including Lee. In a spasm of competence, he translates what they’re shouting and what I already know: Those bodies in the pickup are the Mayor and his security detail.

The Mayor has been incinerated by a roadside bomb, planted at an Iraqi police checkpoint that is manned by Iraqi police 24 hours a day.

This crowd. The police are firing into the air, over people’s heads to keep them back.