As the Victim of a Violent Man, I Feel Like I’m Being Silenced 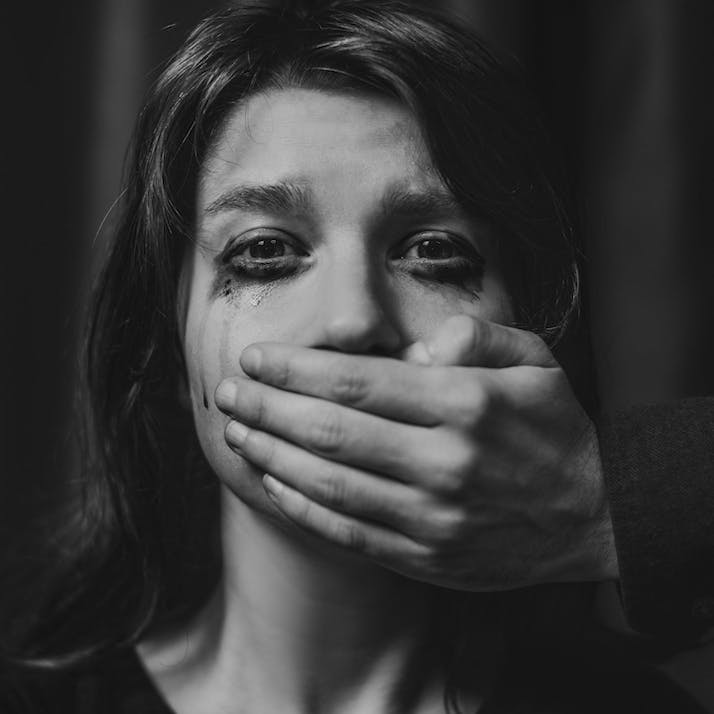 As the Victim of a Violent Man, I Feel Like I’m Being Silenced

Women's voices are often pushed into the background. This is especially true with abuse.

To celebrate my 30th birthday, I embarked on a solo adventure to Edinburgh. Like a lot of young travelers, I enjoy using dating apps to meet local people and see the country through their eyes.

Finlay (an alias) looked like he’d teleported from the beaches of Southern California. When he met me at the door of my hostel in Edinburgh’s Old Town, I was instantly smitten with his golden tan, sun-bleached hair and icy blue eyes. Over drinks, I attempted to fill in this blank canvas: He’d grown up on an island of 600, the youngest of six siblings. He was a passionate traveler but loved his country and had voted for Scottish independence. He never, ever dated local girls. I liked how he was able to laugh at his lame music taste.

Despite having the feeling that Finlay was drunker than me, come closing time, I agreed to accompany him to a jazz bar, only to realize it was closed when we arrived. Finlay was furious. I started to have a bad feeling but told myself to relax and not to worry about it.

“”
The victim-blaming and denial were almost worse than the night I had endured with Finlay.

I Was Physically Assaulted by a Tinder Date

I was going to piss myself if I didn’t find a toilet soon, so we went back to his nearby apartment, where Finlay poured us both a drink and chose some music. He settled himself down at the coffee table, engrossed in the rolling and smoking of cigarettes and apparently lost in a world of his own.

I quietly listened as he began spitting out accusations in a surreal, one-way conversation: I was Miss Negativity. A headbuster. Controlling. Had a strong opinion of myself. Made boys’ lives hard. “No wonder you’re single,” he said.

I discreetly made video recordings to send to a girlfriend, or maybe I subconsciously knew this was a bad situation and wanted some kind of evidence. I expressed my discomfort and said I wanted to leave.

The next thing I knew, my body was trembling as Finlay stepped into my personal space. “Please move away,” I told him. “You’re scaring me.”

Next: shock as he lunged at my hair. The kitchen lino beneath my cheek as he dragged me across the floor. “I might die tonight,” I thought.

As I hyperventilated, he panted in imitation. “Are you a dog?” he said. I can’t be sure but he might have barked.

“Calm down,” said the police officer after I escaped.

It had taken eight days for them to arrest Finlay, before quickly releasing him from custody. My word was not enough to detain him.

In my grief, I took to social media to share his face and warn others. If I wasn’t doing something every waking hour to keep what I experienced from happening to another woman, then I wasn’t doing enough.

I realized that the rare possibility of a man succumbing to a false accusation was more important to many than the frequent physical abuse of women. Although I was mentally prepared for some backlash, to see the accusations with my own eyes was something else entirely. The victim-blaming and denial were almost worse than the night I had endured with Finlay.

“Did you think that Tinder is possibly not the best place?”

“We only have your word for this.”

“Part of me suspects this is bullshit. I’m sorry you’re having a bad day.”

“Violence against women? No violence is taken as seriously as it should; absolutely no need to specify gender.”

Before having my posts reported and deleted entirely, each response triggered my newfound anxiety, with trolls using my history as a mental health writer to discredit my claims. I was going out of my way to warn others about this dangerous man while still recovering from my own trauma, and this was the thanks I got?

I drank and I drank.

“If something like this happens and you want to get a result, you need to build a case that everyone can believe instead of just expecting them to take you at your word,” they said.

I’d stopped recording before the attack because there was no storage space left on my phone, and even if I hadn’t, who knows what he’d have done when he snatched my phone from my hand? Why didn’t he hit me, so I’d at least have physical evidence? Why did I think someone that attractive would want to treat me well?

“You’ve got a strong opinion of yourself,” he’d said.

And then it happened: Just when I thought I couldn’t feel any worse, the messages began trickling in from local women. Many had seen his face on the apps and thanked me for warning them. Some had had their own run-ins with Finlay.

“”
It’s been a stark reminder that my voice as a woman is worth less than a man’s.

A few weeks later, after I’d thrown myself into publicly shaming the police and contacted the press, my case was picked up by Edinburgh’s domestic abuse unit. I was finally being heard. It turned out that several other women had reported Finlay before my own incident. While I’m pleased that justice may be on the horizon, how many women must come forward for our word to carry the same weight and bearing as the Finlays of the world?

Making space in my mind for this experience has been easier than making space for society’s rejection of it. While friends have rallied around to remind me I wasn’t to blame, it’s been a stark reminder that my voice as a woman is worth less than a man’s.