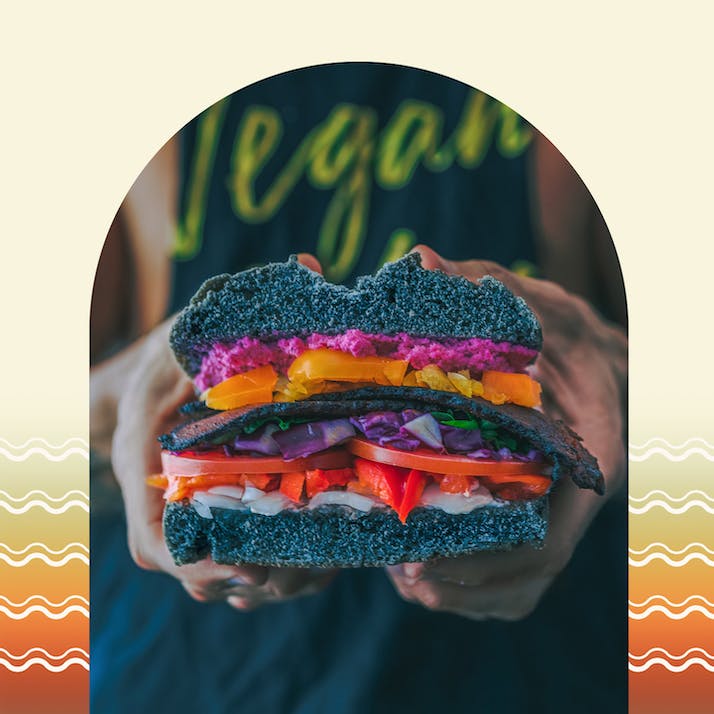 A vegan explores how pop culture and innovations in food have made veganism accessible—and its future inevitable.

Years ago, I was in Chicago for a high school vocal ensemble trip—think Glee with less glam. One of my friends, Olivia, was vegan. I always hated the sight of veins when I cut into the chicken breast my mother served at our very American 6 p.m. dinners. There was an aversion to knowing I was eating another animal’s flesh. So in Chicago that weekend in 11th grade, I decided to try out being vegan with Olivia.

I remember how restricted the options were, how impossible it seemed to find anything vegan on a menu. The salad I ended up ordering was served with Parmesan on top, and I determined this experiment impossible. At 17, I thereby declared, “I never want to inconvenience myself that much to be vegan.”

“”
Sometimes, I’d choose candy over food if I couldn’t guarantee there was no dairy or animal products in it.

At 18, upon moving out of my parents house, I quickly became vegetarian. It was only natural to me. Tofu was a much safer alternative to veins, blood and fat. Plus, I could still eat loads of free soft serve in the mess hall while I was studying abroad in Australia.

At 19, before going to live in China, I’d hopped over to Olympia, Washington, to watch my brother graduate from one of the most liberal colleges known to man. You betcha PETA had a stand there—and you know I picked up their flyers and their infamous vegan starter guide. That summer in China, I mostly ate bread and boiled spinach.

For a year or so, I rocked the junk food vegan life. By 20, I was traveling full-time, backpacking all of South America. Sometimes, I’d choose candy over food if I couldn’t guarantee there was no dairy or animal products in it. Let’s just say things in the early 2000s weren’t so easy.

After that, I was studying in India, and holy Krishna, was it rough to be vegan there! Vegetarian? Yes, the easiest. But the moment you want to cut ghee (clarified butter) and paneer (farm cheese) from the menu, you’re fucked. I cheated. I surrendered. I tried and fell and got up again. I was still vegan, with a few streaks of cow pus across my face.

In my early days gallivanting the world until 2013, it was never convenient to be vegan. In some places, like Spain, they couldn’t even conceive of what it meant. In East Asia, they’d try to sneak meat into soup broths “for my health.”

But then, everything started to change. Alicia Silverstone, a mainstream vegan, passed the torch to Elton John. The millennial's childhood dream boy Leonardo DiCaprio got on the scene, and within years, “vegan” became a household term.

How Celebrities Influenced the Rise of Veganism

I started seeing way more vegan restaurants pop up nearly everywhere I went, from a remote village in southern Ecuador to Bishkek, Kyrgyzstan. As a proud ambassador for the global veggie eating guide HappyCow, I’ve helped keep the world updated on the status of vegan restaurants worldwide, and they are rapidly growing in number.

As celebs make the move and influencers rule the show, it will be no time until everyone shifts their ways. Documentaries like Cowspiracy and What the Health gave everyone the opportunity to experiment. I showed The Game Changers to a lover in Hawaii, and he literally cleared out his fridge and became vegan that night.

Vegan festivals, conferences and food shows are now my most frequented stops in my nomadic traveler’s lifestyle, and all the natural health food stores I visit have an array of locally made or imported vegan substitution products. Now that Bill Gates’ investment portfolio has followed in the footsteps of Leo’s, we know the tides have turned.

Natural hygiene, the philosophical roots of naturopathy, my profession, urge us to return to our species-specific diet. Think of chimpanzees in a zoo. They’re fed fruits and vegetables. Our digestive systems are nearly identical. So for me, and for those I teach and advise, plant-based is a no-brainer. It gives our body less to process, less toxicity and thus more time to renew and repair. In other words, you grow healthier!

“”
The future is knocking, and this time, the cows won’t come home.

I’ve had my fair share of people sit in my naturopathy consults and tell me they’ll do anything I want, but they just won’t give up cheese. I know it’s hard to imagine life without it. Some might ask, “Is that even a life worth living?”

I get it because I myself have gone in and out of my vegan cheese addictions over the years. But now, there’s much higher quality stuff on the market these days than ever before. Greece is dominating the vegan cheese production for Europe, and Whole Foods just copies whatever cassava stretchy cheese works well in the States.

The feta varieties from coconut are even preferable to the real thing. It’s the string cheese stretch ones that just can’t be copied—I’d rather pass on that than eat a vegan pizza. There’s even a German brand of sliced cheese that many people taste and don’t realize it’s not dairy! And hey, the payoff is huge when you don’t have a slathering of mucus—the body’s self-protection shield—in your throat after normal ice cream or cheese. Ew. Just thinking about it grosses me out.

(As for vegan meat replacements? I’ll also pass on anything too processed. But if you eat wheat, I highly recommend you try a seitan dish at a restaurant and see if you can tell the difference.)

Will Veganism Take Over? I Think It’s Inevitable

My 70-year-old parents have opened up to my dietary choices I’ve made over the past decade and have even changed their own. My dad didn’t realize the Beyond Burger wasn’t meat the first time I grilled it for him—now they eat them every week. I can find vegan options on most menus most places, and the world is simply opening up to inclusivity around people who “inconvenience” themselves as much as me.

Cows versus cashews aside, I bet that most of humanity will become vegan within the next decade or two. From my world travels, the ease of vegan conversion, the health factor, the way that we’re destroying the environment and the way we’re crawling toward the tipping point of mass adoption, it seems an unavoidable direction. Factory farming aside, our water supplies are dwindling, and eventually, there won’t be any other choice. The future is knocking, and this time, the cows won’t come home.

My claim that “I would never inconvenience myself that much” made sense in 2005. It doesn’t make sense today. Veganism is no longer inconvenient. And it will continue to permeate every corner of the world, developed and developing alike.