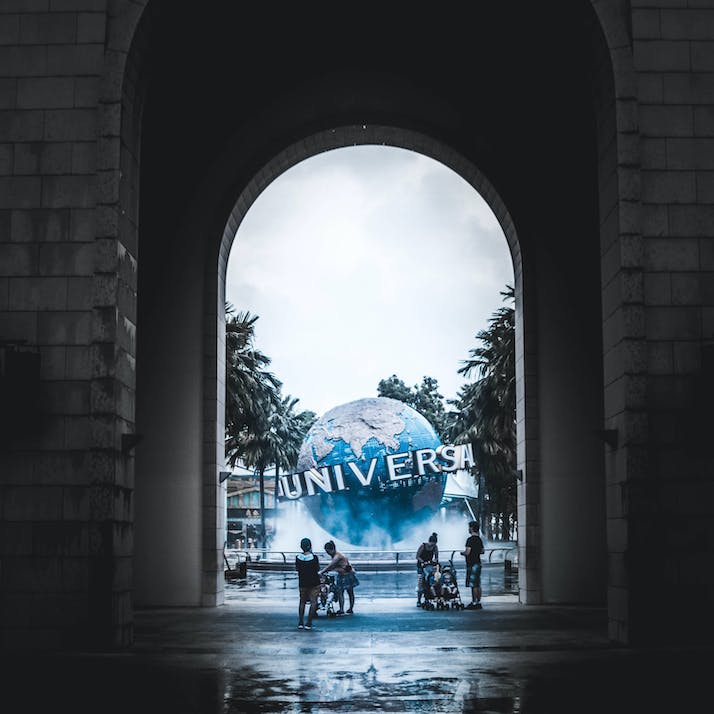 I Worked at Universal Theme Park During the COVID-19 Pandemic

A former employee of the Orlando destination exposes malpractice and ignorance.

Okay, for starters, I've never actually been to any theme park for fun—ever. No, I'm serious. I enlisted in the Army straight out of high school, served for three or four years, and that gave me all the thrill I needed out of life. After that, the plan was school and freelance work till I either got famous and picked up by a design studio, or Kanye West deposited a million dollars in my bank account by accident. Since neither of those things have happened, I'll just tell you about what goes on at the one amusement park I worked at during the current pandemic. That way you'll avoid it because it's the least safe place to be in the country right now besides the White House.

It all began at the beginning of the year. I’d recently graduated from school and needed a job—nothing crazy, just something to help pay bills. I’m an artist—design, illustration, all that shit—so I applied everywhere, looking for any type of work I could do that was art-related. Unfortunately, there aren’t a lot of entry-level creative jobs in Orlando, Florida. I wasn't surprised. I asked some friends—the ones who didn’t leave right after graduation—if any of the places they worked at were hiring. After about a week, a homey hit me back and told me this art job he had at Universal Studios was looking for more people. I took the job, no questions asked. Not only did I need the money, but I'd never been to Universal, and a chance to see it would be dope. So he set up an interview with his manager and I met up with him a few days later to show him my art portfolio. It was the most unorthodox interview I've ever had, but I got the job, my shit uniform and all.

Fun in the Time of COVID-19

I started at Universal in late February. It was hot, and there was a soundtrack that played all day on a loop, over and over. Since I worked in the KidZone, I had to listen to shit like Trolls and Shrek movie music all day. It was straight garbage, but it had its perks, plus the pay was decent.

So we time-skip a little into April. By now all the world knows about COVID-19, and big business orders a shutdown on anything that would cost them money, including Disney and Universal’s respective parks. For a couple of months, we were all out of jobs. I went back to freelancing and surviving with my fiancée. It was a struggle since we both worked at Universal. (It wasn't easy to get her a job there with me, but it was convenient.) So, two artists, out of their normal nine-to-five, freelancing and living off what they know. Unemployment was like the lottery. A lot of us got denied before we even finished the application, only to find that the Florida government was doing it on purpose because they couldn't pay all of us like that.

June came, and I got a text from my boss to open an email they’d sent me. (A simple phone call would've worked.) The parks were opening back up, woo-hoo. I was extremely skeptical, I didn't trust people with this pandemic, especially after watching crazy folks with guns storm state capital buildings—for fucking haircuts. These are the people who make up fake medical conditions to prevent having to wear a mask. My friend who got me the job has asthma that he's had his whole life. My fiancée was born with a lung deficiency, so she only has one actively strong lung. So when Patty Crybaby and Hank Hard-Headed whine about having to wear a mask, all my respect goes out the window. I just can't deal.

I still went to work, of course, because I had bills to pay. I think that’s how all of us felt. As an employee, you could kind of tell what everybody around you was feeling, which was dread and desperation. We needed a way to survive, and this was the only guaranteed means that we had.

“”
They lied about all the sanitation they said they’d do.

We Needed a Safe Workplace; We Got Theater

Universal made it feel like one of those cult books—1984, that George Orwell shit: “Big Brother is watching,” and all that. Yeah, that's what it felt like: giant posters of random Universal workers wearing masks, reading "Welcome Home, We Missed You." It was so creepy, and just so fucking weird that I honestly hope they fired whoever thought those were a good idea. Also, they lied about, um, well, all the sanitation they said they’d do. They didn't take it half as seriously as they said they did. I don't really have to back that up with evidence. The proof is in the numbers. Universal opened up one week; the next week, the whole state of Florida was the epicenter of the U.S. pandemic.

Let me take you there: Okay, so daily, when you go through the back gate for employees, you have to get your temperature read. Too high, and they send you home. After you go into the first building in the back, which is wardrobe, you have to wear your mask at all times. They have hand sanitizer everywhere, so there’s never a point where you can't tap that bottle and get a little on you for safe measure. It was clockwork, a well-oiled machine—in to work and out, no problem, no issue.

Or so most of us thought.

The issues started to arise after I told my fiancée she should leave the park. She already had another job, so it wouldn't hurt us financially, and the thing about my boss was, he liked to run his mouth a lot. He was telling me and the other coworkers things that we needed to know but probably weren’t supposed to—like how other managers were getting infected and being sent home, but not the employees.

We had a Zoom meeting late in July about opening up another art stand and had to go over the rules. This man told us, "The park is the safest place to be." So I dimed him out to everybody on the call. I told them all about how a week prior to this they’d let three employees come to work with high fevers—including one reading 103.8, and who was a damn chef, somebody who handles food.

“”
I dimed him out to everybody on the call. I told them all about how a week prior to this they’d let three employees come to work with high fevers.

The Park’s Still Open: Why?

It was all smoke and mirrors and security theater, and for what? To get more of peoples’ money? They were practically giving away tickets—all the deals they have going on left and right—just to get the attendance up. It wasn't worth staying there and risking myself or my fiancée’s health. She already has a medical condition, and I'm not putting her life or any of my friends’ lives at risk. To this day, I still wish they would close both Universal and Disney because things aren't getting better. They're only getting worse. People aren't taking this seriously, especially when they don't even enforce the mask policy. It ain't worth it.

"Universal is the safest place to be." That shit still echoes in my head every time I see an ad for the park on social media. I know without a doubt I made the right call to leave. I'm clean, and so is my fiancée. I hope that every single person who walks into that park—or Disney or any of 'em— understands what they’re doing when they do. I wish them all the best from the safety of my apartment.