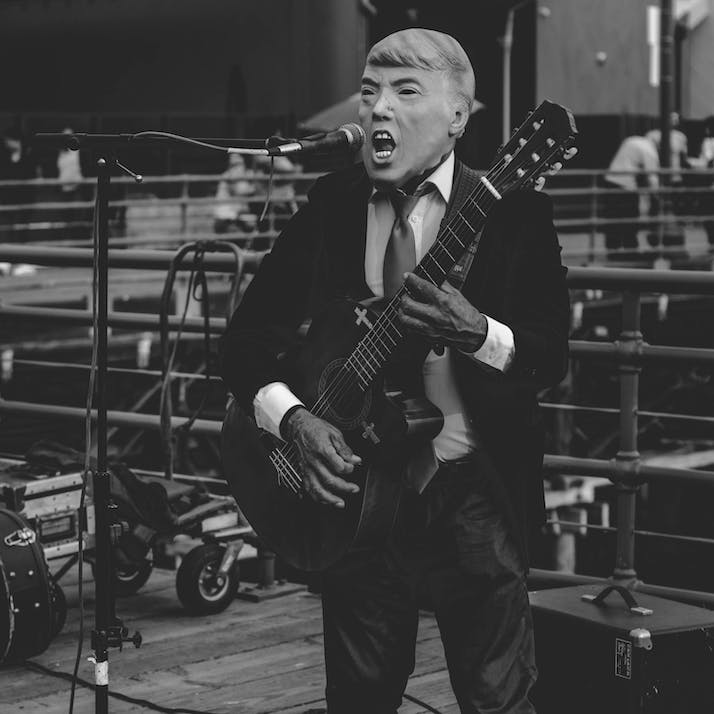 Upon the president's 2016 election, many assumed the protest music of the '60s would return. Instead, pop music has become this generation's political force.

When Donald Trump was first elected and people were grasping for the barest hint of silver lining to make the next four years seem survivable, one of the more notably desperate responses to the situation was, “Well, at least punk will get good again.”

Leaving aside the callous self-centeredness of the idea, it makes sense that people would think like that. Even before his inauguration, anyone even remotely left of center could tell that Trump was going to be a bad president on par with Richard Nixon and Ronald Reagan— both of whom happened to have inspired some of the greatest protest music in the American songbook. In America’s pop-culture-obsessed collective imagination, you can’t separate the civil rights movement or protests against the Vietnam War from the socially aware music on the radio at the time.

After you’ve seen enough montages of hippie protesters set to “Fortunate Son,” it’s natural to assume that whatever Trump was going to get up to, our era’s musicians would respond with an appropriate soundtrack.

“”
But the lack of protest songs on the radio doesn’t mean that music hasn’t played a vital role in this year’s uprising. It just means that there’s no difference between pop music and protest music anymore.

As a music journalist, I can attest that the Trump administration gave us some good punk in certain obscure corners of the genre located well away from the mainstream (and not coincidentally, made almost entirely by the exact types of people who the Trump administration has singled out for specific harassment over the past four years). But people—usually older, all liberal—who have asked me about the state of protest music seemed to expect some kind of mass pop-musical uprising that never materialized.

The Spotify charts weren’t flooded with message songs. We didn’t get a “new Dylan,” who could be both a pop star and protest movement icon. When future filmmakers look back at this chaotic moment in American history, there won’t be a “Fortunate Son” (or “The Times They Are a-Changin’” or “Turn, Turn, Turn”) that leaps out as an obvious soundtrack choice.

There’s not even a “We Are the World.”

The message of most big pop songs of the Trump Era continues to be that big butts are good, money is even better and going to the club is fun. (Also that prescription drug abuse is rampant among young rappers.) The common liberal complaint that pop stars are fiddling while Rome burns aren’t entirely off base. They really are singing about blowing hundreds of thousands of dollars in luxury brand boutiques while people are dying of an unchecked pandemic and children are being locked in cages away from their parents for no other reason than that they’re poor and brown.

But the lack of protest songs on the radio doesn’t mean that music hasn’t played a vital role in this year’s uprising. It just means that there’s no difference between pop music and protest music anymore.

Hippie Ideas About Protest Music Are Out of Date

First of all, let’s get something straight: Listeners in the 1960s weren’t anywhere near as woke as movie soundtracks would have you believe. Buffalo Springfield’s “For What It's Worth (Stop, Hey What's That Sound),” a staple of documentaries looking back at the era's protest movements, came in at number 27 on Billboard’s Top 40 year-end singles chart when it was released. Crosby, Stills, Nash & Young’s “Ohio,” maybe the most iconic message song in rock history, didn’t even make it on the 1970 chart. B.J. Thomas’s empty-headed “Raindrops Keep Fallin' on My Head,” on the other hand, was the fourth-most popular song of the year.

And if there wasn’t a defining protest anthem of this year’s uprisings, it’s not for lack of options. Heart-on-their-sleeve indie rockers have been cranking out anti-Trump tunes since the day he won the election, but rock ‘n’ roll isn’t culturally relevant anymore, so none of them caught on. This summer’s widespread protests against racial injustice and police brutality generated a lot of musical responses, most of which was blandly uplifting and immediately forgettable. Even the few legitimately good protest songs in the '60s mold to come out this year—like the haunting meditation on police brutality “Freeze Tag,” by the all-star combo of Terrace Martin, Robert Glasper, 9th Wonder, Kamasi Washington and Phoelix—struggled to find traction.

You definitely didn’t hear any of them at the protests themselves, although there was plenty of music in general. Out in the streets, what you heard were mostly songs about butts and getting high and going to the club. Cheap, powerful Bluetooth speakers turned some protestors into ad hoc mobile DJs, and their selections favored energy and pleasure over messaging or earnest uplift. Marches across the country for queer and trans people happened to the sound of Ariana Grande and Lady Gaga. In New York City, one of the most popular songs at racial justice protests was the recently murdered Brooklyn rapper Pop Smoke’s street hit “Dior,” a menacingly triumphant celebration of self-actualization through luxury fashion, without an overtly political sentiment in sight.

Part of why the biggest protest stretch in recent American history didn’t produce more obvious protest music is that one of the form’s most basic functions—to transmit a dissenting view of current events and institutions controlled by the powers that be—has been taken over by social media. As fast as music moves in the digital era, images move even faster. Viral video footage, live broadcasts and infographics turned Instagram into a grassroots alternative media network, and kept young people informed and engaged with events happening across the country outside the view of the traditional media outlets—in real time.

And once that education and motivation is in place, protest music’s other major role—to provide the soundtrack for the protests themselves—can be filled by nearly anything. Instead of picking up the musty mantle of solemnity that earlier generations of protestors wore, the people marching this summer chose, wherever possible, to express themselves through joy and energy and an infectious sense of liberation. They chose pop music.

It was, in its own way, a powerful choice. Despite how some influencers made it look on Instagram, there was, and will continue to be, real risk to being out in the streets and making your voice heard. The aggressive, sporadically violent police response to the protests made it clear from the jump that anyone who joined a protest—no matter how peaceful, no matter how law-abiding—was opening themselves up to arrest, injury or worse.

“”
Just because something is pleasurable, doesn’t mean it’s not also powerful.

The Power of Joy

Responding to intimidation with joy isn’t unserious, or simple pleasure-seeking. It’s an effective means for exposing the limitations of violence, which is the only advantage that the police, lacking any moral authority, have had in the confrontations. When marchers can sing bubblegum pop songs at cops lining the streets in riot gear, or when Minnesotans turn the site of George Floyd’s murder into a block party, or when occupiers of autonomous zones set up P.A.s and bring in DJs, it proves to the police, to the watching world, and to themselves that they can be spiritually untouched even as their opponents bring in their heaviest artillery.

It can also be a powerful practical demonstration of the world we’re trying to build in place of the police state that we live in now. It’s a world where personal happiness is valued, instead of commodified, and where liberation is both free and at hand, instead of dangled in front of us as a retirement-age reward in exchange for a life of labor. It is, frankly, a world where there’s more fun, more dancing and more spontaneous parties in the streets.

Just because something is pleasurable, doesn’t mean it’s not also powerful. During the "Occupy City Hall" action in New York City this summer, protesters took over a park across the street from city hall and turned it into a self-contained village organized along anarchist principles, which is to say that it was allowed to grow organically, without a hierarchy, to meet the needs of the people there. Along with the tables offering free political literature and vegan meals, one corner of the park was repurposed as a musical space where live bands and DJs set up.

During one of my trips down there, the dance party that had been taking place in that corner of the park suddenly spilled out into the street. Dozens of protesters took over the traffic lanes to shake their asses to wildly unserious rap music. The spontaneous eruption of joy reverberated through the area, and even some of the drivers being held up by it cheered them on. It was a moment of transcendental anarchy. The cops standing in front of city hall were armed and in full riot gear, but I’d never seen them look so powerless.