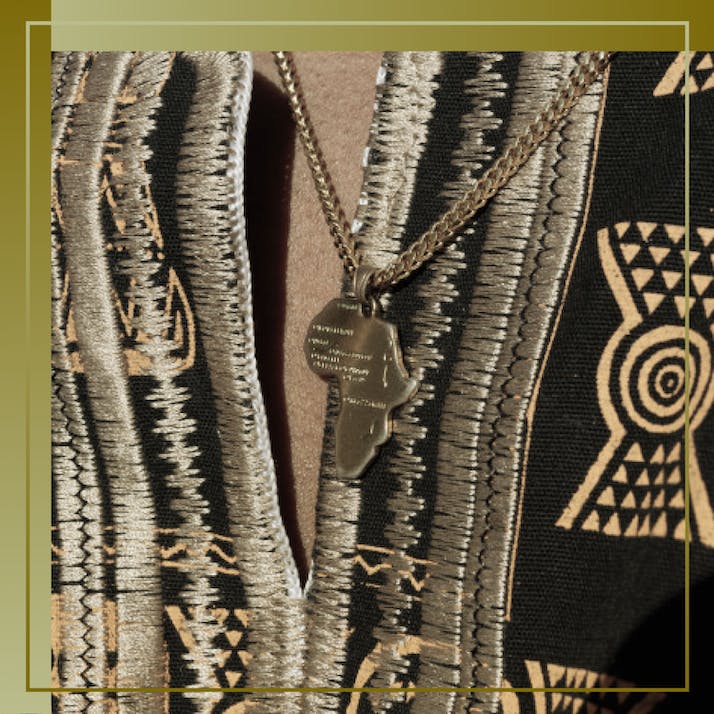 On a Trip to Nigeria, I Discovered My Black-American Identity

Visiting Africa for the first time, an actor shares the mixed emotions of learning about his roots.

I skimmed over the directions, grabbed the small vial out of its box, popped off its cap and I very carefully spit my saliva into the jar. I wiped off my shirt, and then silently questioned the insanity of this approach—I mean, here I am, voluntarily giving my DNA to a company that likely might turn around and sell it later. A piece of me hated that I was taking these steps, unearthing “my story.” My identity had come to this. But, like anyone who had their identity stolen under the myth of the “American Dream,” I was desperate for answers.

Growing up, I always envied white people because of their wealth. I don’t mean monetary wealth; rather, their wealth of information—the photo albums, the diaries, the birth and death certificates, the oral histories—and those priceless artifacts that tell their story. I always wondered why my family didn’t have that, too. My mother should have been able to show me the faces of my elders through frozen moments captured on film. My father should have been able to read me their words from journals and manuscripts passed down across generations. I should be able to give my daughter those moments and words to carry across time.

I can never get over all of the lost stories. Who were these people? What did they love? Did they ever find their dreams? What were their passions? Did they ever dream of me? Did they pray for me? What was Africa like? What tribe do we originate from? What is our true language? Who was our God? When they died, did they have peace? Did they fight? Were they leaders like me? Who the fuck are we?!

I mean, isn't that the whole point of language in the first place? To communicate the vital and necessary information that we need to survive. Instead, it's been used as a weapon to marginalize and control the masses. Who could have guessed that the cause for so many of my tears could be boiled down to the fact my ancestors were legally stopped from reading and writing, from speaking their native language, from having a family, from loving each other. I didn’t know it was possible to miss so many at the same time. I didn’t know it was possible to miss people I'd never met.

“”
I can never get over all of the lost stories.

I Wanted to Go to My Homeland

I grabbed my passport, threw my backpack over my shoulder, shoved my cellphone into my pocket, grabbed my suitcase and double-checked for my passport. Then I headed downstairs, climbed into a black SUV and made my way to the airport. I was scared for so many reasons. In a few days, I would be filming as the lead in my first feature film, and we were shooting the entirety of the movie in Lagos, Nigeria. I had never been out of the country before, let alone Africa. I anticipated that I would be rejected by locals, who, in their minds, saw me as an “American,” not a person of West African descent—not one of them, not family. Only as a watered-down version of what’s real.

I knew nothing about Africa—I might as well have been visiting another planet. I recalled what I was taught to believe about Africa, and it inspired this arrogant feeling, this idea that I was better simply because I was raised in the U.S., that I was smarter or better off despite our ugly history. In some strange way, I really believed that and hated that I did. I was embracing thoughts that weren't really mine; like an animal, I was following my basic conditioning without question. I learned not to beat myself up about it, because at the end of the day, it wasn't all my fault. I was just doing what I was told and now that I was asking these questions, I finally had the power to change it. All of these rising insecurities were a byproduct of my need to be accepted and, deep down, I just wanted to go home and feel loved.

My mind couldn't stop thinking about what was stolen from us. From me. It made me angry to think that I didn’t have a home. I think about my ancestors as a compass, a guide to returning home where people and stories unlock our identity. How many healers, prophets, artists were stolen from me? I always dreamed of home when I was a child, but those dreams didn’t have a language or words, it was all feeling. When I would hear stories of my classmates going home to Mexico to see their abuelos and abuelas, I envied them. I wanted what they had. I wanted to have somewhere to go. I cried as I conjured up those emotions. I used to think I didn’t care about my history. It wasn't that, I was just hurting just like anyone else that didn’t have a place to call home.

“”
I knew nothing about Africa—I might as well have been visiting another planet.

My Character Struggled With His Nigerian Identity

I tried to swallow those thoughts and get into character. At the end of the day I wasn't going home, I was just going to work. This wasn't a vacation, this wasn't about me. I was being hired to tell a story. I needed to focus.

I could heavily relate to my character. In his mind, he couldn't identify with being Nigerian—these weren't his people. Taught that allegiance to his country superseded his ethnicity and identity, he was convinced that he was an American. He was sent to Nigeria to learn about his roots and would ultimately end up email scamming others in order to get back home. Our ideas were the same, but we really related in our pain. At the end of the day, we didn’t belong, we were homeless. We had no soul, no identity. For some of us, to be American means to be nothing.

As the plane made its final descent, I listened to Kendrick Lamar’s To Pimp a Butterfly. I wondered if the rapper ever considered if his music could be the soundtrack to a stranger's journey. I kind of felt like Santiago, from The Alchemist, when he set out on his mission to find the pyramids. I was also searching for something that I couldn't even imagine, hoping that I'd recognize it when I saw it. As I stepped off the plane, I felt like a fish out of water, the prodigal son making his return.

Going Home Was a Necessary Start

In between set-ups, I talked to a man that strangely resembled a distant relative. In an alternate reality, he could be like an uncle or a father of sorts. He spoke to me with a conviction as if I was a lost boy wandering in his village and he was responsible for me. I told him how I didn’t have a home and I knew nothing about the people that came before me. All of those stories, all of that history, all of that love was lost forever. He looked at me like I was a book he was reading, and seemed to know the answers to the puzzle I’d been trying to solve my entire life.

A few days later, while filming at the airport, I received an email notification. I had finally received my ancestry results. The ethnicity estimate read 31 percent Cameroon, eight percent Ghana, 22 percent Other, and 39 percent Nigeria. A weird excitement washed over me. I felt a little closer to finding out who I was. I had a sense of direction now. I had finally found the pyramids.

There was still so much that I didn’t know, that I wanted to know, but this was a start. We finished principle photography, the film went to a major film festival, and is now on Netflix. But my greatest accomplishment was finding out what home looked like.