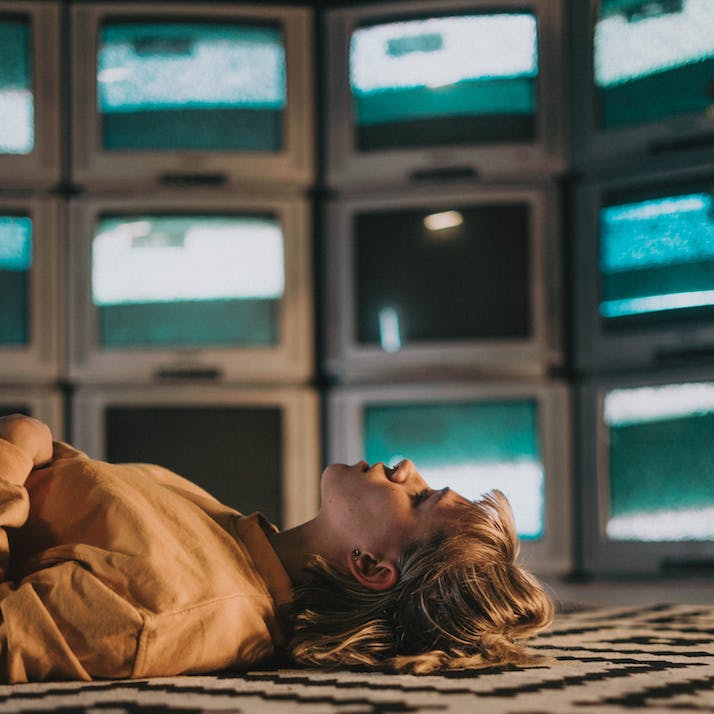 Watching Trashy Reality TV Got Me Through a Friend's Death

Unable to face the harsh realities of the world, I found pleasure and escape with different kind of reality.

Imagine you’re at a party, half an hour deep into a meaningful conversation with your male friend. Across the room, someone calls your name and your attention is momentarily snatched away. Upon turning to resume the conversation, you discover he’s vanished. Perhaps he’s outside having a smoke, or seized the opportunity to empty his bladder. Nonetheless, the sensation is unnerving, disconcerting. Someone you were so sure was just there—laughing, sipping a beer, listening attentively—slipped away without your knowledge. You can still feel the warmth of his body, like a phantom limb.

This is what it’s like to lose a friend in your 20s.

My friend, we’ll call him Ed, was a fucking hoot. Not only that, he was extremely nice, too. Always had time for everyone. And not half-bad looking. I know it’s incredibly cliché to drown the dead in praise, but I struggle to think of something negative to say about Ed. He just had one pretty damning fault: a substance abuse problem. The combination of this and a losing battle with his mental health is what eventually led to his death. He was 22.

Wrapping your head around someone’s passing is an obstacle made even harder to surmount when you lived together. Ed— along with me and a group of 60 or so other young people—was living in an Australian farm town called Ayr, home to ample aubergine harvests, sugar cane fields and the odd venomous brown snake. Surrounded in every direction by vast stretches of flat, empty road or fields of farmland, there was very little to do, which drew our little community of backpackers even closer.

Shortly after Ed died, a number of our friends left the hostel. Through a strange coincidence, the end of these friends’ jobs coincided with Ed’s passing, meaning much of our friendship group loaded up their enormous bags and drove down the sprawling Bruce Highway towards Sydney. Those who remained were left to ruminate on our friend’s death while being simultaneously reminded of his life, his old bunk just a stone’s throw from ours. Two days after his death, I started a new job packing mangoes into boxes, which were stacked high and loaded into enormous vans destined to markets and restaurants hundreds of miles away. I felt envious of those mangoes.

Reality TV has always been a coping mechanism for me during times of heightened emotional distress. When I’m caught in a riptide of anxiety and my body floods with cortisol, making sense of the world around me feels impossible. In these moments I crave something easy to digest and episodes of sugary reality TV slide down the gullet with ease. The good guys and bad guys are clearly defined. Each story arc has a neat beginning, middle and end.

I knew I needed a distraction. Between the ache of grief, endless monotony of my working days, recent reduction in friends and long stretches of time spent with my own thoughts driving to and from the farm each morning, my brain yearned for comfort. And so I began self-soothing with reality TV, my old pacifier. I tried the Kardashians, but the family’s displays of wealth were too gauche. Watching anyone from my home country, the U.K., brought on a torrent of homesickness. Instead, I settled on Vanderpump Rules, an eight-season reality drama following the lives of restaurant employees in Los Angeles.

Grief is a funny thing and I expect most of the bereft do not seek solace in TV like VPR. But to me, the show was magic. The premise is such: Lisa Vanderpump, the British brunette of Real Housewives of Beverly Hills fame, runs SUR Restaurant in West Hollywood. SUR stands for "Sexy Unique Restaurant," making the real title, “Sexy Unique Restaurant Restaurant,” which I suppose sets the tone. Our protagonists are wannabe actors, models and musicians whose shot at gratifying fame has probably passed. Instead, they’ve settled for tequila, attention and reality TV notoriety, fighting in the dingy alleyway behind SUR and throwing drinks over one another for our viewing pleasure.

The tumultuous relationships between the cast are just familiar enough to be relatable but maintain a level of distance. Characters are at once loathed, loved, flawed, deluded, inspired and pitied. I downloaded the series to my phone and efficiently worked my way through each season on my commute—at breakfast, before bed and in the bathroom when talking to other people became too difficult.

“”
Observing young people misuse alcohol soon after losing a friend to substance abuse might sound like torture, but it was cathartic.

Vanderpump Characters Prove Nothing Is Unforgivable

The first season sees Stassi, a smiling assassin with glossy blonde locks and the sinewy limbs of a top model, battle with Jax, her on-off, bad-boy boyfriend. It’s obvious from the get-go that their romance is toxic. Stassi seethes whenever Jax’s wandering eye falls on another woman, while he in turn stokes the problem by flirting with every living soul in sight. They fight. They cry. They make up, only to split in an even more spectacular fashion. In their orbit, a merry band of fellow model-bartenders dance around the fire, fanning the flames and throwing on their own self-sabotage, delusions and unhealthy relationships for kindling.

The beauty of VPR is that you can never really root for a character because everyone’s behavior is equally rotten. But by the next breath, the worst individual is somehow redeemed. As I steamed through the series, watching my heroes’ and heroines’ faces become taught with Juvéderm filler, I realized there are no winners in the VPR universe. Everyone gets a drink thrown on them. It’s oddly cathartic.

When the most shocking allegations—impregnating a prostitute and cheating on your girlfriend in Vegas; sleeping with your boyfriend’s best friend on an IKEA sofa as your partner sleeps in the next room—turn out to be true, the audience is titillated with horror. But the show taught me nothing is truly unforgivable. Each cast member gets their vindication story arc, their atrocities absorbed as part of the ebb and flow of life. Watching these people forgive one another and, more importantly, themselves made me wonder what it would take to lift some of the guilt I carried with me following Ed’s death.

Observing young people misuse alcohol soon after losing a friend to substance abuse might sound like torture, but it was cathartic.

There are few case studies better than SUR’s staff in examining the blurred lines around misuse of intoxicants—there’s a gray area between using and abusing. The VPR cast dips its toes into this undefined space more than once: We see it when Jax pounds eight shots at the bar for no reason, or when the cast sneaks wine under the table at breakfast, or whenever characters frequently debate what happened during a night of blackout drinking. The show is a lesson in why abuse is hard to recognize, and why it’s even harder to intervene, especially when you’re surrounded by other people who are preoccupied with their own inner demons.

Of course, there’s an element of schadenfreude involved as we observe these aesthetically beautiful young things fight, fuck and fail at their respective singing and acting careers. Watching a man nearing 40 steal a pair of sunglasses just for kicks or two grown adults screaming over a bowl of pasta is in some way vindication. But it’s impossible not to watch the show and feel some level of empathy with the characters whose most vulnerable moments are immortalized on television. For me, getting lost in the drama—sharing their euphoric highs and devastating lows—was a welcome break from grief, absence and the unrelenting Australian heat.

During quarantine, as COVID-19 anxieties swept over the world, I turned off the news and tuned back into VPR. Its original shock factor was gone, but I still slid into the fully immersive, chaotic VPR world like a warm old jacket. Naysayers often dismiss reality TV as harmful or frivolous, a piece of mottled chewing gum on society’s shoe. There’s some truth in this assessment but these shows hold up a dirty mirror to human behavior, forcing us to reflect and stare, while providing escapism when life becomes too hard.

The real world can wait.