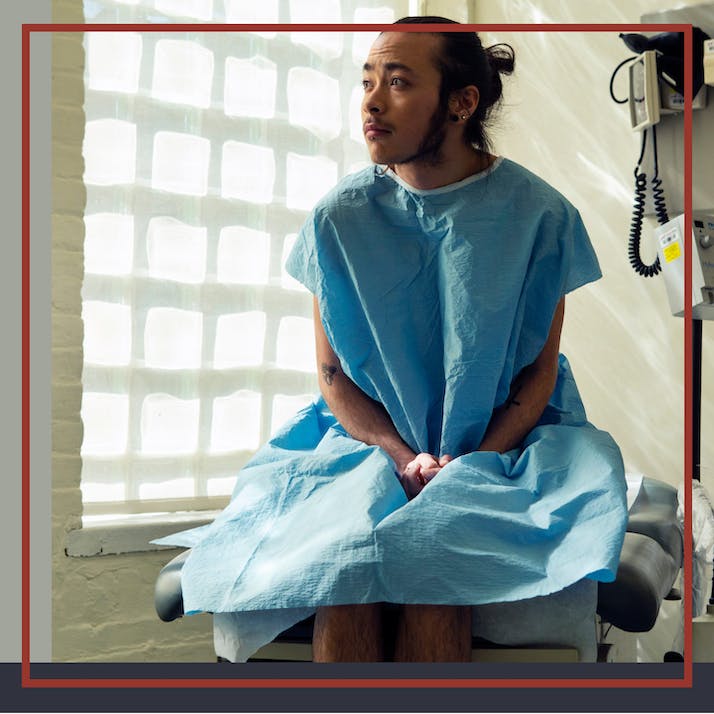 Healthcare for All Must Include Trans-Related Care

Insurance companies must lighten the obstacles and financial burdens for those transitioning.

I grew up in a house without health insurance for most of my life. My dad was self-employed and my mom worked part-time at a local hardware store, so no one had access to employee health benefits. We didn’t have a lot of money, so paying for insurance out of pocket was out of the question. We never went to doctors unless we were basically dying. It wasn’t until my junior year of college that I had health insurance because of the Affordable Care Act. I finally could see doctors and therapists for my physical and mental health issues and not have to pay completely out of pocket. If I needed medical care for anything, I wasn’t afraid to seek help. At least, until my first year of grad school.

When I moved 1,000 miles from home to get my master’s, I began to come into my own and to spend time figuring out who I was and who I wanted to be. It was during my first year of grad school that I realized that I am transgender. I no longer wanted to be perceived as a woman; I wanted the world to see me as I saw me: as a man. This meant changing things like my haircut, as well as taking testosterone and having top surgery. I would quickly realize this was not so straightforward.

“”
It’s not uncommon for transgender people to start GoFundMe pages to raise money for these life-saving surgeries.

There Are Many Obstacles to Endure Before Getting Top Surgery

Because I went to grad school outside my home state, advisors recommended that I become a resident of the state where my school was located to have all of my tuition covered by my stipend (I had to pay the difference between in-state and out-of-state tuition during that first year). In doing so, I was no longer a dependent under my parents and had to get my own health insurance. This was right at the point of figuring out that I am transgender. As I was looking through every company’s statement of benefits, it became clear how little was covered.

Let’s take a journey through my process of “becoming a man.” I knew from the beginning that I wanted to be on hormones and that I at least wanted top surgery (the removal of my breasts). Any form of bottom surgery (hysterectomy, phalloplasty, metoidioplasty, etc.) wasn’t a big concern for me. To get to the point of hormones, I had to see both a psychiatrist and a psychologist and get letters of recommendation stating that I was of sound mind and body and capable of making this medical decision for myself. Thankfully, I was in a large college town with more than one option for a provider. However, finding one that took my insurance—and wasn’t more than $150 per session for a copay—was a challenge. I was able to use one of my school’s psychiatrists to get one of the letters; the other came from a therapist I had seen while on my parents’ insurance but quit seeing when I got my own.

So great, we’ve got the letters and a referral for an endocrinologist (hormone doctor) in hand. This should be easier now, right? Dear reader, it was not easier. This was about to only get more complicated and more expensive. I went to my initial appointment and got my first prescription for testosterone. Yay! Then came every required follow-up blood test, since taking testosterone can cause increases in cholesterol, blood sugar and kidney enzymes. Most insurance companies will cover one blood test per year as part of a regular physical. Anything after that can cost anywhere from $25–$150 per test.

In my first year of taking testosterone, I had to get bloodwork done six times, including specialty testing done that specifically identified how much testosterone I had in my blood. This specialty testing was another $25–$150 per test because it’s mostly uncovered by insurance companies unless you’re getting it as a cisgender man and are having fertility issues. All this to just make sure I can still take a prescription.

“”
I would quickly realize this was not so straightforward.

Surgeries are in a league of their own. An insurance company covering any or all of a gender confirmation surgery is virtually unheard of. Even getting to the point of surgery can be a struggle. Most surgeons will require their patients to have been on hormones for at least two years to allow any physiological changes to happen and then plateau.

So, imagine doubling the cost of all the above bloodwork. Then we get to the actual surgeries. Top surgery can cost anywhere from $8,000 to upwards of $12,000. Bottom surgeries vary greatly in price. The two main options for transgender men—metoidioplasty and phalloplasty—can cost $6,000–$30,000 and $20,000–$50,000, respectively. It’s not uncommon for transgender people to start GoFundMe pages to raise money for these life-saving surgeries.

I haven’t had any surgeries yet due to the high cost. I don’t plan on having any form of bottom surgery done; I’m thankful only the top half of my body sends me into dysphoric spins. I want to have top surgery in the future, but how am I going to pay for that? Maybe I’ll take out a loan; maybe it will happen through a GoFundMe. What I’m hoping for is that my shitty genetics can get me through a loophole. My paternal grandmother had Ashkenazi Jewish heritage and died from breast cancer, so I may be a carrier for the BRCA gene. Maybe I can have top surgery written off as a preventative measure. How twisted is that?

Why bear this financial burden? Why cause so much stress to your bank account? Because being the truest version of yourself is priceless. Studies from the Human Rights Campaign, the Trevor Project and GLAAD all confirm that transgender people who have access to means of gender confirmation are less likely to commit suicide. If insurance companies will pay for my Wellbutrin to treat my major depression every month, they should cover the other life-saving medical care that I need.