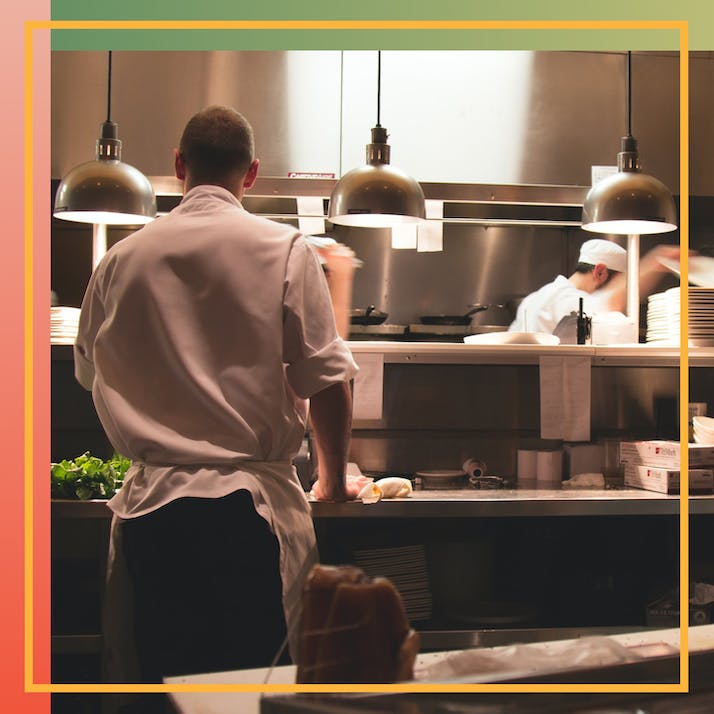 From unreasonable working demands and poor compensation, I understand why substance abuse runs rampant in the food industry.

Growing up in Southern California in the ’90s meant many things for the average lower-middle-class kid. One of them was Red Ribbon Week, similar to the national D.A.R.E. program that most people from that time recall. Both programs were designed to educate children about substance abuse and would go on to be used nationwide to far-reaching effect. Along with extensive anti-smoking campaigns, these programs would shape my perception of used substances and the people who partook in them.

With a teacher for a mom and a self-employed electrician for a father, my perspective on work and fair compensation was also heavily colored. It’s not something I found myself contemplating as a kid, but I remember looking back and thinking how normal it must have been to decide your own hours and your own pay and taking reasonable amounts of time off. Of course, at that age, I wasn’t able to understand that those benefits were the direct results of a teacher’s union and self-employment.

The reality for many blue-collar workers, namely kitchen staff, is very different.

“”
It wasn’t anything new to be told on the day that I was working a double; it was a given that I would say yes.

I thought about this as I took a puff of the proffered cigarette from my new head chef, having just been told I was working a double that day.

I had cut off the tip of my pinky that morning and was angry at the fact that I had to toss out a whole case of onions I was preparing because of the blood. To this day, I can’t feel anything using the tip of that finger. I moved on when I got the distinct impression from my chef and coworkers that injuries like that were normal.

It wasn’t anything new to be told on the day that I was working a double; it was a given that I would say yes. I also understood that working while not 100 percent healthy was normal and expected. What surprised me was that the magnitude of the injury had little effect on the expectation and that management had planned to further overwork their already short staff instead of hiring more to cover their newly opened second location.

Today, I understand that the situation was preposterously normal in this industry, but it was eye-opening to see the exploitation disguised as opportunity. The staff was kept small because anyone not dedicated enough wasn’t welcome, and there was a better chance of climbing the job ladder if you stuck it through. It became very apparent that the better paying positions were harder to hold, and with less people working, the more likely it became that you could get to those positions.

My Naivety Allowed Me to Be Exploited

Driven on delusions of becoming a sous chef myself, I didn’t bother looking at my checks more than making sure that they got deposited. Thankfully, I was in a place in my life where I knew between myself and my partner, we could make ends meet. I was putting in this work to try to learn and advance while focusing less on the money. That said, I figured my checks should have been large considering the 14-to-16-hour days between three locations I was pulling.

“What overtime?” was the response I got from two of my coworkers during a smoke break a month into the opening of the third location. It was explained to me that only two members of the kitchen staff were making overtime besides the head and the sous chef. These two cooks only ever worked at the flagship, and double shifts kept them in one location. The chefs and the general manager all made a salary.

It turns out that even though the names of the restaurants connected them as the same company and staff, we were being paid as employees at different businesses. Call me naive or gullible, but I had been so focused on proving myself and learning that I had assumed I was being compensated fairly for my effort.

Cooks and Chefs Use Drugs to Cope With Toxic Work Environments

Not wanting to rock the boat, I still went to my shift at the new location, but I hoped to catch one of the owners or the head chef there to ask what the deal was. At the end of one of my longest weeks and with this realization weighing me down, I was not operating as normal, and one of the couple new hires picked up on it.

Sitting on a crate out back, in between puffs on his vape, my coworker reached into a bag and asked if I needed a bump. Once I realized what he was asking, my Red Ribbon Week programming kicked in, and I emphatically refused. He clarified that he was just concerned I was going to crash and that I looked exhausted.

That’s when it hit me that he was just trying to help. All the rituals and oddities I had been observing and participating in fell into focus in the wake of that moment. From the mundane (smoking on a break) to the extreme (drinking and doing drugs before, during and after the job). I realized they were the only means of coping that some of my coworkers had available.

“”
Smoking, drinking, drugs and drama were ways for my coworkers to deal with their situations.

Thinking back on those times is a blur, and life was the hustle and bustle of the restaurant. Smoking, drinking, drugs and drama were ways for my coworkers to deal with their situations because in many cases, that’s all they had outside of the never-ending work, which we weren’t even being properly compensated for.

In my experience, the food world is one that people work in out of necessity or because they love it. No matter which camp they belong to, most of them need to supplement their income by taking on another job or acquiring more shifts. Many will lack the time and resources to handle the stresses of the industry and will find themselves falling into the aforementioned habits we are taught to abhor from a young age.

I’m not asking you to go above and beyond what you should be doing already—tipping well and treating people with respect. But I hope you understand that until people can work these jobs and feed their families without overworking, we will continue to see soaring suicide and substance abuse rates in the industry. Consider the following: The service and food you receive from someone properly supported in their work will always be better than the service of someone who might be high and newly missing part of their finger.