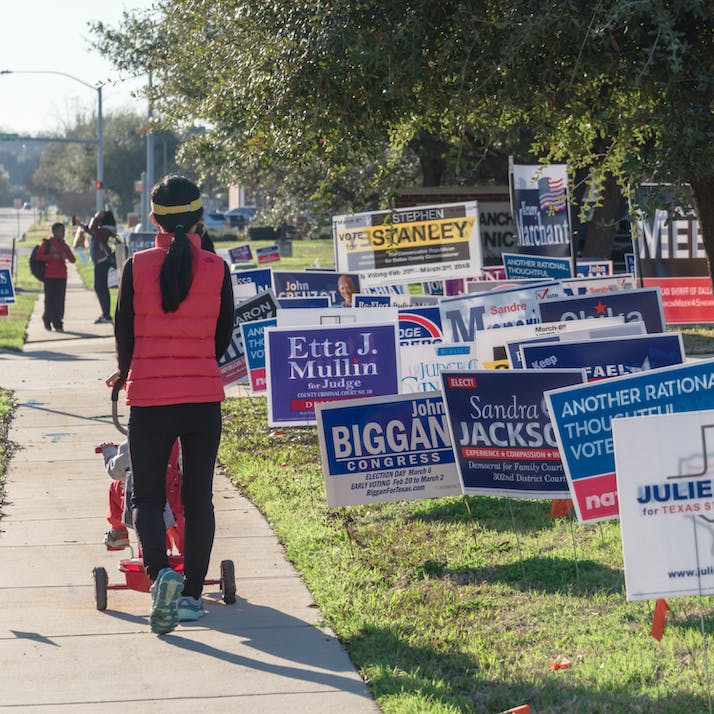 I Work in Texas Politics: We Have to Root Out Racism to Move Forward

Raised in a prejudiced household, the author describes her fight for progressive causes in her home state.

When I started preschool, I was left-handed. The Catholic nuns who taught us immediately took my dominant hand and tied it behind my back. I was forced to grow accustomed to doing things with the “right” side, even though it felt wrong and unnatural. This was the first time the left side of me was constrained by my oppressive, right-dominant environment.

Growing up, children tend to view their parents and the adults who teach them as moral exemplars of good. Even while studying their every move and hoping to please them with each action, I struggled from an extremely young age to comprehend why it felt so natural to defy my surroundings.

I remember in preschool being placed in time out for choosing to sit with a Pakistani child at lunch. I remember being told that there was something “fundamentally wrong with me” for believing that people of different races and religions could be associated with each other. I remember being told I was a disrespectful daughter when I refused to use the N-word. But I especially remember the time I finally understood the term “white supremacist.”

“”
Then the election happened.

Waking Up to White Supremacy

Up until the 2016 election, I had been surrounded by people with the same views of my parents: extremely conservative, religious and white. Religion was the basis behind everything. Mental health issues were addressed by a preacher, not a therapist. When I moved high schools, everything began to change. I made friends with people of different races and religions, and while this seems basic and a given for some people, it was earth-shattering for me. I went a full 180, from someone who was raised to believe that Muslims were terrorists, to someone whose best friend was Sunni and wore a hijab.

Then the election happened. At school, I would see my friend shoved in the halls because “the new president would take care of her.” When I came home and told my parents they supported the bully. My Puerto Rican friend wept for the unknown status of her family after the hurricane while my neighbors wanted to “send her back,” despite the fact that Puerto Ricans are U.S. citizens. There was an active shooter false alarm one day while I was alone in the hallway, and no classroom would let me in a locked room. I sat in an abandoned, unlocked classroom crying, knowing that my community stood for Second Amendment rights.

I got involved in activism by staging a walkout in response to the Parkland shooting in 2018. When my parents found out about what I was planning, they begged me not to do it. While they tried to stop me, I think they knew that nothing would keep me from walking out of class. After the school district found out and local news stations picked up the story, I was plagued with comments like “soap-eating communist brat” and “take her to the NRA convention in Dallas next week and I’ll deal with her.” However, my walkout was the largest in Texas, and gained immense amounts of attention.

I didn’t want to stop there. Shortly after our gun violence protest, the Trump v. Hawaii decision came down and constitutionalized the Muslim ban. On top of that, the child separations at the border were beginning to take place.

I decided to immerse myself in this culture, disappearing for weekends to study how detrimental these decisions were to the affected communities. The chairwoman of the Democratic Party in Texas asked me to take phone calls at the office while she was away. It just so happened that while I was the only one there, the Beto for Texas campaign staff came in and needed me to organize an entire countywide campaign within a week.

Things happened pretty quickly after that. The Beto campaign created significant change in Texas and I entered some of the inner circles in the political world. As a Gen Z college student who helped bring Texas to battleground-state status and had a history with protests, I found many opportunities to bring change, and I took them. I even won awards for my work from Congress and former presidents.

How My Political Work and Family Life Collided

People saw me as this model student activist with the perfect life, and my parents supported me online and through social media, but things got violent behind closed doors. One day they yelled and grabbed me, accusing me of following a dangerous path. They cut me off. The next day I hosted a campaign event with Michael Bloomberg. I remember thinking to myself, “I'm sitting across from a billionaire Democratic presidential candidate as a college student thousands of dollars in debt with no family support. How did I get here? What do I say?” I asked him a very blanket question about how he planned to redistribute wealth and solve the student debt crisis. Since then, though, I’ve had a lot more time to reflect.

I decided a few months ago that I will no longer take my family’s gaslighting and manipulation. (Mind you, part of the issues were not completely ideological.) At age 18, I became completely financially independent, and due to abusive situations I had alone in the past, I now refuse to meet with them without a counselor present.

Since then, I’ve been put into a lot more contrasting, prestigious situations, interning with a news agency based on Wall Street, where I’ve interviewed Anthony Scaramucci and the president of the Council on Foreign Relations Richard Hass. I’ve even helped organize a massive protest for Black Lives Matter. The plot twist is that, despite what my former community says (or doesn’t say) to me in private, it isn’t what they show other people. The reposts, the bragging about people I’ve met, the public support—all that masks to others the white supremacist behavior that they engage in behind closed doors.

I know people will tell me that I need to love my family and the people I grew up with because they are close to me. I’m told all the time that we have to put politics aside. I’ve tried, but it hasn’t worked. Meeting with them with a counselor, not talking politics, agreeing to disagree—all of these solutions came to nothing. I think the real major problem is narcissism. Some people completely lack empathy for others. It’s not that they believe this or don’t believe that, it’s that they’re unwilling to listen.

I don’t know where I’ll be politically in a few years. The campaigns I’m working on now have me focused just on getting to November. What I do know is, what you see is not what you get, and I will continue to expose the real problem: not the outspoken racists and evangelicals, but the ones that try to stay hidden.