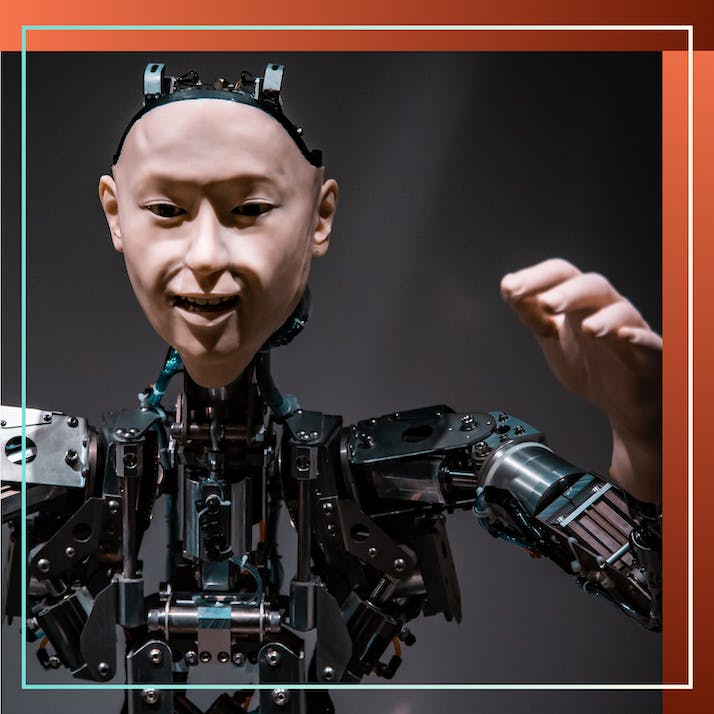 The Promise of Technology Is a Threat to Our Biology

As we continue to make technological progress in the world, we risk losing our humanity.

The 1980s were an exciting time to be born. TV and movies preoccupied our minds with science fiction and outer space. Nintendo was fresh on the scene and robots captured our fascination. We watched reruns of The Jetsons, where Rosey the Robot kept the house clean and put food on the table. In movies, robots were tasked with terminating every last one of us. One thing was clear: The future, in terms of progress and problems, was tech.

I was a normal, white privileged, lower-middle-class kid from a blue-collar town. I played street hockey outside with my friends, a very popular thing to do in the ‘90s. We developed skills to retrieve pucks from the sewer, how to look out for cars, how to get up from scrapes, falls and bruises. We played outside in the cold. We learned from the pain and we became stronger for it. We didn’t worry about helmets until much later, when they started to become essential bike-riding equipment. Better tech meant better protection from a dangerous world.

It seems technology is what humans naturally develop. If we don’t like something, we try to improve upon it; with improvements come new challenges, and demands more innovation. This repeats until the future of our species and the direction of the planet now lies in its hands. Welcome to the Anthropocene: a testament to our innovative spirit.

“”
Not even sex is safe from being replaced.

Our family got its first computer in 1994: Windows 3.11 on an Intel 75MHZ processor, 1.19 GB hard drive, CD-ROM and a 28.8k dial-up modem. Meanwhile, I was in middle school making friends. Video games, computers and the internet provided a reprieve from the brutality of adolescent social life. Technology created a safe space, a digital womb.

Logging on to the internet for the first time was like entering Stargate; we had to put sticky notes on the phones so nobody accidentally terminated our session trying to make a phone call. It took hours, sometimes days, to download songs from Napster. It was cool to get free music but it sucked having to wait so long. In only a couple of years, the technology changed. Suddenly we were always connected with high-speed broadband.

Soon, infinite knowledge was at my fingertips. I wasn’t even out of high school yet and was addicted. AOL Instant Messenger took me hostage almost immediately. Being captive to the screen meant protection. It was a great, safe way to pass time indoors and be social with friends. Call it cyber Stockholm syndrome. It was a seamless integration, a usurpation of my attention. I knew technology was the future, so I followed what my friends were doing and enrolled as a CS major. After all, I was still a kid and just wanted to be accepted.

Smartphone Fever Pushed Me Into the Wilderness

Within a month of starting college, 9/11 happened. I was in between classes when I heard the news. It was a tech school that issued every student a laptop, and the first in the state to have wireless internet. Every single laptop in front of me in the lecture hall was playing the same devastating footage. The internet kept us informed about “what really happened” and privacy concerns in this new era of national security. The easy access to information was a rabbit hole. I had no idea what I was doing in school anymore. The digital womb was starting to feel like a trap. My inner animal wanted to be free, but it couldn’t ignore how the world was so rapidly changing. And because of our progress, I was able to stay informed from the confines of my laptop. Always connected, always informed, always aware of the environmental problems facing the world. After three semesters I failed out, eventually enrolling at community college to study liberal arts.

The disruptive power of technology was gaining momentum. School and work rapidly became more and more computer-based. The computers got smaller and became smartphones. The internet was always with us and all this screen time was disorienting. I had had enough. I went to Oregon with only a backpack of clothes and my skates. I peeled myself from my screens and into reality, amongst the old-growth forests. It felt natural and right, surreal and alien, dangerous, but safe and calm. This was when I had a real opportunity to reconnect with the world around me, to reconnect with the lost ways of my early childhood; the here and now.

I needed a new phone so I opted for the cheapest, most basic flip phone. This smartphone hiatus lasted three years. It showed me the attention-sucking nature of these devices. I hated how, in conversation with any number of my friends at any given moment, someone would lose interest in the “here and now” and compulsively check their phone. I felt like I was surrounded by addicts. I grew to hate smartphones. I hated how they owned my friends. But as I was preparing for a drive back East, I wanted a GPS, so I asked my dad to send me his old smartphone. Like any addict thinking just this one time, I relapsed.

“”
We are more connected than we’ve ever been, unnaturally hyperconnected and yet also more isolated.

Technology Is Changing Our Relationship to the Environment

Is our technology just part of the natural world, some natural sequence of behaviors for any intelligent life? If making tools and technological progress is what we as a species are supposed to do, why even try to resist? Are we just mechanisms for entropy, converting matter from one form to the next in order to make our existence as efficient as possible? Do we exist to replace what already exists with that of our design? We are the changing universe, which is changing itself.

Ultimately, technology is changing our environment and our relation to it. Every advance makes possible what once wasn’t. These changes don’t always jibe with the institutions of evolution that engendered us to begin with. At the same time, they create novel ways for self-expression and coping. Technology, while being a driving force for climate change, allows us to be whatever version of ourselves we choose, while also protecting ourselves from the dangers of reality. We can be whoever we want to be on the internet, and we have virtually zero consequences for our actions. We are more connected than we’ve ever been, unnaturally hyperconnected and yet also more isolated.

Our brains are hyperstimulated as our bodies sit idle, staring at a collection of bright dots. (The solution? Stand-up desks!) Our progress is paradoxical, almost as if the more we try to avoid chaos and death, the closer we get to it. Some scientists predict that our species could be extinct in as few as 80 years. This may well not be the case were it not for our progress.

Tech Will Inevitably Integrate With Our Biology

Is more progress our only hope? While the world burns, we will have VR to experience education, concerts and waiting in line at the DMV. Eventually, our bodies’ cells will become obsolete, unfit for this brave new world. Artificial intelligence will become smarter and faster than humans in every way, and humans will have no choice but to integrate technology into their biology. We will preserve our sentience in an entirely virtual ecosystem. We will be bodiless gods of our own universes.

Not even sex is safe from being replaced. Does the availability of online pornography and life-like sex dolls suggest that soon we won’t even need partners? Sperm and egg will be synthetic and made to order, and birth will be an optional, virtual experience for women. Reproduction will be created in labs by genetic counselors under very controlled conditions.

Perhaps it’s true: There is nothing new under the sun. But, it will eventually die—and when it does, if we want to exist, we will need a way to do without it. There are plenty of other threats to our existence in the meantime. For example, ourselves. We have no choice but to find out if we can have our own subjective worlds without a biological substrate. We will keep working to be safe, making progress on the problems of our progress. In the meantime, go outside.