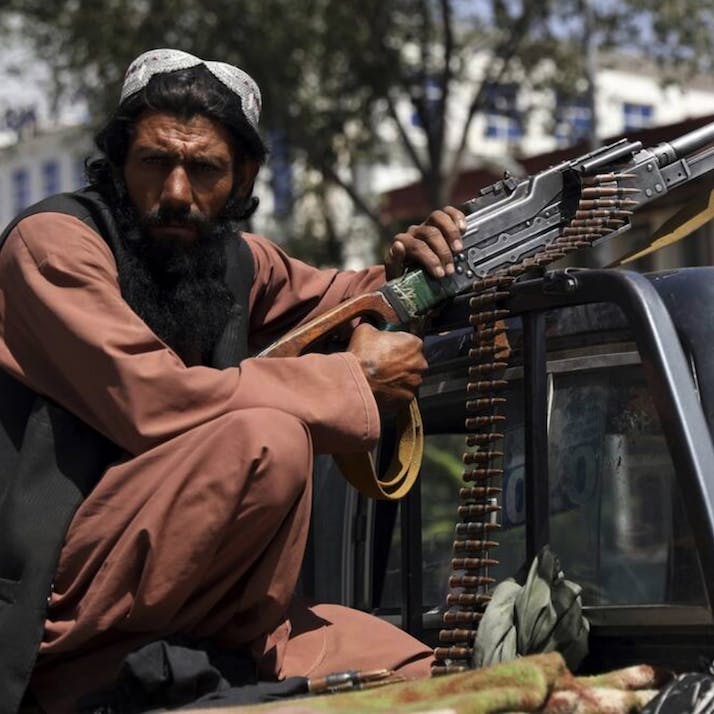 The Taliban Just Waltzed Back Into Afghanistan: What Was My Military Service For?

A former engineer in the Royal Air Force grapples with the Taliban’s resurgence, questioning the purpose of military efforts over the last two decades.

I was deployed to Afghanistan in April 2011 as a communications engineer in the Royal Air Force (RAF). Through every part of my military journey so far—joining, basic training, trade training and my first posting—I had dreamed of doing exactly this, and it was finally happening.

I was never much interested in playing soldier—if I were, I wouldn’t have joined the RAF. But I wanted to deploy to a war zone and do something to make some kind of difference, even if it was just a tiny impact to know that I made my mark, that I helped someone in some way. And sure, along the way, I would do something that not many people get to do: go to a warzone and experience the sights (sand), smells (sand) and sounds (sand storms).

I spent half of my five months there working in casualty reporting. I worked night shifts, sitting on my own in a hangar full of desks and computer screens. Whenever a British soldier was killed or injured, I would use reports from the field, piecing together the events that happened through pictures and videos sent back to me, and then I’d send them up the chain of command.

On the face of it, it was a pretty easy job. I felt like I was having an impact (even if really small), and my family back home was happy because I was relatively safe. In the military, I was known as a REMF, or a “Rear Echelon Motherfucker.” In other words, people who stayed behind the wire and didn’t get into any danger, and apart from the odd mortar or rocket lobbed at us, that was absolutely true. I was fine with that.

What actually happened to me though was something very different. In reality, I was witnessing death and life-changing injuries of British troops on a nightly basis, often in some of the most horrific ways you could imagine. On some occasions, I would look out the hangar door and see a person’s body being taken off the Chinook helicopter to be taken into the hospital next door. Over this time, I guess I saw around 20 people killed and hundreds injured. I also saw a young child murdered by the Taliban and animals used as suicide bombers.

I refused to accept that any of this would bother me because I saw it as my job.

“”
I was witnessing death and life-changing injuries of British troops on a nightly basis, often in some of the most horrific ways you could imagine.

Years Later, I Was Diagnosed With PTSD

After my tour finished and I arrived back home, I didn’t speak much about any of this, but the signs were there that something wasn’t right.

At times, I would completely zone out of the room. I was pissed off at the world and blamed everyone for everything (even if it was my fault). I stopped enjoying things and distanced myself from those around me. Initially, I was diagnosed with mild depression, then moderate depression, then severe depression. As time went on, I became suicidal and spent way too much time planning how I would end my life in tiny detail.

By 2015, I didn’t know it but I began to show symptoms of psychosis—my perception of reality changed, and I saw it as my purpose on this earth to fly into the Middle East and take on ISIS as a one-man army. Eventually, six years after I’d returned to the U.K., I was diagnosed with post-traumatic stress disorder (PTSD).

Frankly, that diagnosis is partly what saved my life—the other parts being my wife and my stubbornness to accept that this was it. I was now able to access the correct treatments, therapies and medications. I was able to process some of the events that happened, and I had two big realizations in the therapist’s chair:

1. The only person in control of my life is me. So, if I didn’t want a shitty life, then it was up to me to do something about it.

2. No matter what happened over there and how hard it was to deal with, I still made a difference over there, and that counts for something.

The Taliban’s Return Made Me Question Everything

Since then, I have lived happily, able to manage my symptoms and run a successful business with a loving family. Afghanistan was always a chapter in my life story that I would talk openly about, and it didn’t phase me. In fact, I was proud of my time there.

Then I saw the news report: The Taliban had returned—and it wasn’t just a pain in the ass or a thorn in the side. They had taken over the whole fucking country in just a few days.

Knowing that this would be a massive trigger, I turned the TV off and sat back. I couldn’t help but think about the women and young girls who would no longer have their education. I couldn’t help but think about the families tortured and murdered because someone wore the wrong bit of clothing or spoke to the wrong person at the wrong time. Hospitals, schools and shops wouldn’t just close down, but they’d likely be burnt to the ground.

That’s when it dawned on me: The second of those two realizations I had while in therapy was now gone. Suddenly, all my time there felt like it was for nothing. And not just for me, but everyone who served there. The people that died there died for a cause, a reason? Now that reason was gone. So, what did they really die for?

When I saw political “leaders” say that nothing could have been done to prevent this—that it was part of the plan all along—it felt like the final nail in the coffin.

“”
Suddenly, all my time there felt like it was for nothing. And not just for me, but everyone who served there.

My Time Abroad Gave Many Afghan Civilians a Better Life

The next day, I called my old therapist and asked, “When are you free? We need a chat!” He was expecting my call and agreed straight away.

Many of my old PTSD symptoms have now returned: the nightmares, the memory lapses, the anger, the brain fog. I’ve made a point to reach out to several military mates, some of whom served on “the front line” (not a real thing, in case you’re wondering). We’ve shared stories from years gone by, we’ve ranted, raved and even laughed at times, and together we came to an agreement that, in this really shitty time, has given me some comfort.

For 20 years, we (as in all countries who played their part in Afghanistan) were able to give hundreds of thousands of civilians a better life. Girls were able to receive an education, people were able to move about and speak freely. People could get jobs or even start a business of their own.

Whatever the Taliban do—and I have no doubt it’s going to be a massive shit sandwich—they can’t erase those 20 years. They happened, and people had a glimpse of a better life.

I’m not talking about democracy or Western values. I don’t give a shit about any of that—and I’m not arrogant enough to think that’s what is going to happen over there. I’m talking about a sense of freedom. This is a luxury most of us in the Western world have, even if life does deal us a shit sandwich.

We have the freedom to choose our response without fearing for our life.