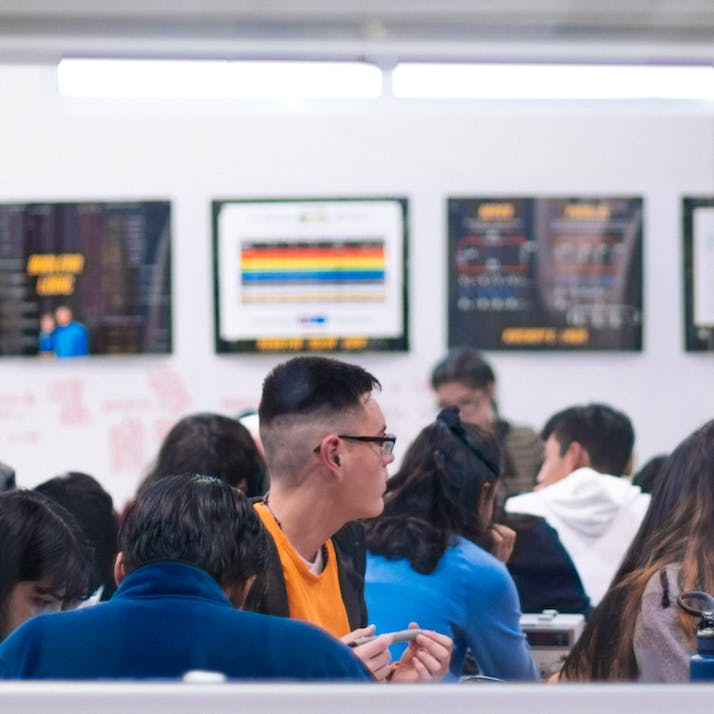 Substitute Teaching Will Ruin You. Do It Anyway.

One of the people you were probably very mean to when you were younger shares a enlightening perspective.

I was standing in the middle of the mall, dumbstruck, fumbling. Neither my management training nor radio and stage experience could prepare me for what I had just agreed to. Running into my old high school dean—the one who saved my life junior year by advocating for me and lighting a fire under my ass—hadn’t been on my lunch calendar that day.

“They won’t listen to me,” I said again. He pressed on, as undeterred now as a principal as he was as a dean.

“You’d be surprised,” he smirked. “You may be the only one they will listen to.”

He turned to walk away. “Apply yourself,” he added over his shoulder. “I haven’t been wrong about you yet.”

“”
The road to hell, as they say, truly is paved with good intentions.

Substitute Teaching Is Rough at First

My first class as a substitute teacher at my alma mater was a disaster. Well, maybe “disaster” is too dramatic. Let’s try “distracting.” By dressing far too casually, I’d tipped the authoritative scales into an imbalance I could never recalibrate, especially in front of so many familiar faces. I thought I was being relatable, but these kids—many of whom clocked me from the mall or the radio—saw themselves less as my students and more as my ambitious almost-peers. This cavalier rapport made it almost impossible for anything I had to say to stick.

Still, I managed to catch their attention.

There was a benefit to speaking the common slang parlance. Instead of resisting it, I leaned into my performance skill sets and radio show prep, finding ways of explaining their present class subject in pop culture terms. It was a rousing success. I had connected! And I continued “connecting” until right around lunchtime when I was summoned to the main office.

Apparently, in an attempt to relate (or perhaps over-relate), I’d shared a personal story that triggered two young women to tears as they shared theirs. Moved, I offered to let them stay on in the classroom for their lunch hour and cry it out while I prepped for my next class. What I didn’t know at the time was that: A) I wasn’t qualified (meaning not permitted) to make such a call, as I was not a trained counselor, and B) there had recently been a very ugly scandal that occurred the grade period prior involving a soccer coach and some very illicit interactions with the students.

Suffice to say, the school had “measures” in place for these kinds of situations. The road to hell, as they say, truly is paved with good intentions.

After word spread that I, a casually dressed novice non-educator, was in a classroom alone with two female students crying, I ended up having to tell my story to the principal and deans. Ignorant of the prior scandal, I plead my case passionately, feeling like I had made a positive, human move with students who came from the same neighborhood as me. I felt like I had actually connected, but the administrators still ended my substituting contract that very day, out of fear of a repeat of the soccer coach incident.

Before that class, no one had given me any training. The school district was short-handed, and just needed bodies in the classrooms to watch the students instead of actually trying to engage them. They weren’t there to learn, I was told, but to be trained to test well. The entire situation hurt my spirit.

Still, I Went Back for More

After taking six months off for equal parts soul-searching and self-directed training, I tried my hand at subbing once more, this time in another township. It turned out to be a world apart from before, and one of the defining experiences of my life.

This district had a more structured approach to education. There was a mandatory business-casual dress code, guidelines on how to respond to crises, clear support personnel in place for counseling, and skills-based testing for all incoming substitutes. I felt prepared this time to show up for whatever students entered the space.

The only issue was that I was now in a township further from where I grew up, so I didn’t know these kids the same. There wasn’t any immediate rapport, and my previous “coolness” factor, I feared, was now lost behind my standards-compliant shirt and tie.

My first assignment was an AP calculus class. They arrived chipper, ready and almost eerily wide-eyed to learn. Yet they regarded me with the same side-eye reserved for those on the outside of their circle of inside jokes and witty banter.

I Finally Connected With Students

But while I took attendance, checking with the kids to make sure I understood and correctly pronounced each of their unique names, an interesting thing happened. Their faces lit up. Their body language shifted. Students, clearly used to years of having their names butchered by subs and regular teachers alike, leaned in and engaged.

We blew through the lessons, then, with 20 minutes left in class, I gave them open study. Their faces lit up with questions…for me. They wanted to know about life, the real world, how much of what they were learning would be applicable out there. They wanted to know how they should approach college, how should they dress, what to look for in a job, why I cared enough to get their names right. My favorite part was being asked how to be happy with yourself, even if you’re choosing a path different from your parents’ expectations.

In my heart, I wanted to give them all the answers they asked for, but instead, I stuck to the script—as instructed. My hands were tied by structure, standards—rules set in place to avoid any unforeseen “occurrences.” I knew that no matter how much I pleaded with the administrators to let me freestyle the lesson plans a bit to connect these kids to the subjects, all they seemed to care about were test scores and collective performance.

So, I politely declined my class’ attempts to connect, telling them I wasn’t qualified to give them the answers they were looking for explicitly—I only snuck them into the day’s lessons. I tried to tell them this. I did. I smiled, pleaded with them, tried as gracefully as I could to not give them the truths they so desperately hungered for in their scholastic experiences. But just like I knew, they wouldn’t listen to me anyhow.