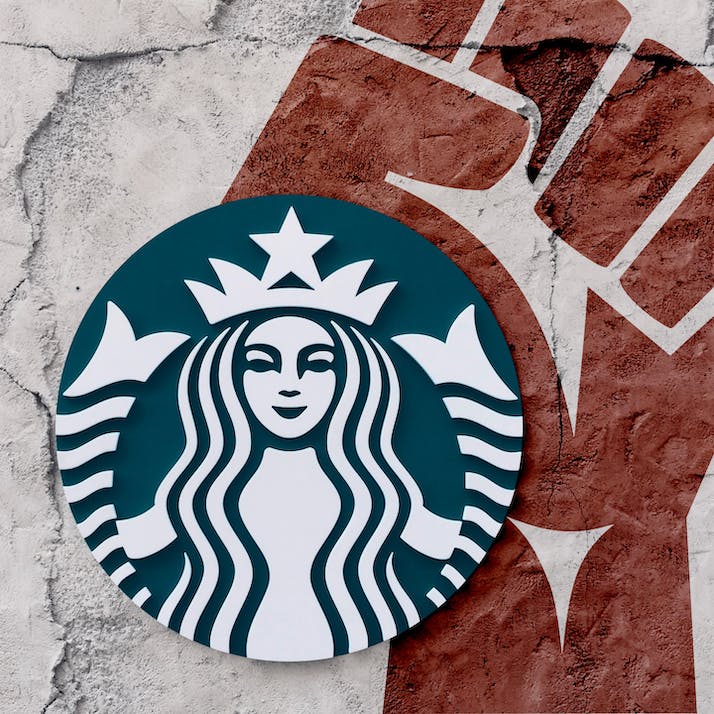 The mega coffee chain stripped employees of their benefits throughout the pandemic. It prompted us to take action.

In the South, unions are often a touchy topic—not much is known about them, and what is known is often shrouded by anti-workers’-rights propaganda. My personal journey with unions started when I was a cast member at Walt Disney World. Unions had already been established for many years, but “The Mouse,” as co-workers not so nicely called it, was trying to push them out.

Being a union member there saved my job against a management team that didn’t want me, and that's when I realized just how underrepresented workers without unions are. When I was wrongfully accused of intentional misconduct and disregard for safety, my union rep had my back and made sure I had all the information, protection and community I needed. Knowing that I could have easily lost my job—and that there were people in the workforce who face much worse because they don't have support or assurance of their employment like that—ignited something in me.

Amongst the other megacorporations, Starbucks is one of the best employers. As a shift supervisor, the benefits and pay are better than most chains, and if you're queer like me, then oftentimes, it's a safe haven—a home away from home. Being a barista introduced me to a community and a family that I may not have met otherwise. However, more recently, Starbucks baristas have found themselves in a chokehold. The company’s benefits are just good enough not to leave (because no other place can match them), but the working conditions are falling faster than a landslide.

For a time, it looked as if Starbucks was going to be ahead of the curve, especially when the COVID-19 pandemic began. Then, things like hazard pay, food and drink markouts, and other benefits were pulled out from beneath us. This is where the push for a more forward moment in labor rights really began at Starbucks.

“”
Once news broke that some Buffalo-based Starbucks franchises had filed for unionization, the game changed.

Talk of unionizing had occurred at my location since I transferred there in July of 2020. At the time, there were only a handful of people who were fed up—not only with how our district manager overlooked our store and its hazardous working conditions but with Starbucks’ corporate leadership, as well. The concerns ranged from the store’s mold to its cracked flooring to its increasingly volatile customer interactions. Funnily enough, our store manager at the time supported our hope to unionize. I even sent an email to the local AFL-CIO (American Federation of Labor and Congress of Industrial Organizations) during the summer of 2021, but I never got a response.

Once news broke that some Buffalo-based Starbucks franchises had filed for unionization, the game changed. At this point, my location had brought in new management. We went from a store that had an almost all-queer staff to one with an uneducated store manager with several transphobic shift supervisors. There was a lot of tension between partners (what the company calls its employees) being misgendered, being singled out for being transgender and being scared to come out to other partners. When the first Buffalo store won their election to unionize, we knew we needed to act.

Our hours had been cut, so partners were doing more work for the same amount of pay, and customers had become frustrated with our inability to move as quickly as we once did. We felt the same frustration. This also affected our drink and food quality, something both we (as partners) and Starbucks corporate cared very much about. It felt like we were using a bucket to scoop water out of a boat with a major leak. Eventually, you're going to sink. Things had to change.

We Formed a Committee and Signed Union Cards Quietly

In December, I was able to get a hold of the lead organizer, Richard Bensinger. We came up with a plan that has now become the mold for organizing at Starbucks: Get a committee made entirely of Starbucks partners to discuss how much support our store has to organize a union. Forming the committee itself was a relatively easy task—I picked peers who our co-workers and I could trust and who could keep information between themselves. Our committee was ultimately formed: three are shift supervisors, two are barista trainers and one is a barista. Having partners on the committee who weren’t only knowledgeable about unions but were also able to communicate and reassure others was key for us.

Once we formed the committee, Workers United got us union cards. We knew that there were certain partners we couldn't talk to until after our filing went public. We knew that we'd have many partners who would be eager to sign. We also knew that we'd face some adversity from partners who were anti-union. Since the committee formed, we'd been slyly feeling partners out by asking if they'd heard about what was happening in Buffalo and what they thought about it.

After realizing we had a store majority, we got to work and signed union cards. There are rules when it comes to signing cards, such as, "It cannot be done when a partner is on the clock," or, "It can take place in the back of the house, so long as it does not disrupt business needs." The committee members at my location put in a lot of work and time to get our cards signed quickly and as quietly as possible. We were transparent with our partners who signed that management absolutely could not know. Personally, I met with partners on my (unpaid) lunch break—I'd have them meet me in the parking lot, since my store manager would often be sitting in the cafe doing administrative work.

We asked partners who had questions to arrive early or stay a bit later after work if they were comfortable. One partner was even out with COVID-19 at the time, so I dropped the card off at their house and then retrieved it after they had signed it. With all the work our committee put in, we had our store majority sign cards within 72 hours and filed the next day.

“”
We've watched partners across the country get fired for organizing, and we are putting plans into place in case we see the same actions against our store.

We're Looking Forward to Paving the Way for Other Franchises

The hardest parts came next. Upper management began a series of captive audience meetings—filled with anti-union propaganda, misinformation and emotional manipulation—designed to persuade partners from unionizing. Soon, tension developed between management and baristas—even customers left notes of support on our community board, only to have them torn down hours later. Our location, however, got lucky. Management didn't know how to approach the situation because most of its members didn’t know (and still don't know) anything about unions aside from what corporate fed them.

In a new wave of union-busting from Starbucks, we've watched partners across the country get fired for organizing, and we are putting plans into place in case we see the same actions against our store. As of right now, we have an election date and are in the process of submitting ballots. We cannot wait to join our peers across the nation to have a unionized Starbucks.

There were—and are—so many moving parts that went and will continue to go into the effort for workers’ rights. None of it can be done by just one person, and none of this would have been possible without the courage and determination of our Buffalo partners, who made the brave decision to become union organizers.

We can only hope to follow in their footsteps as this movement grows.