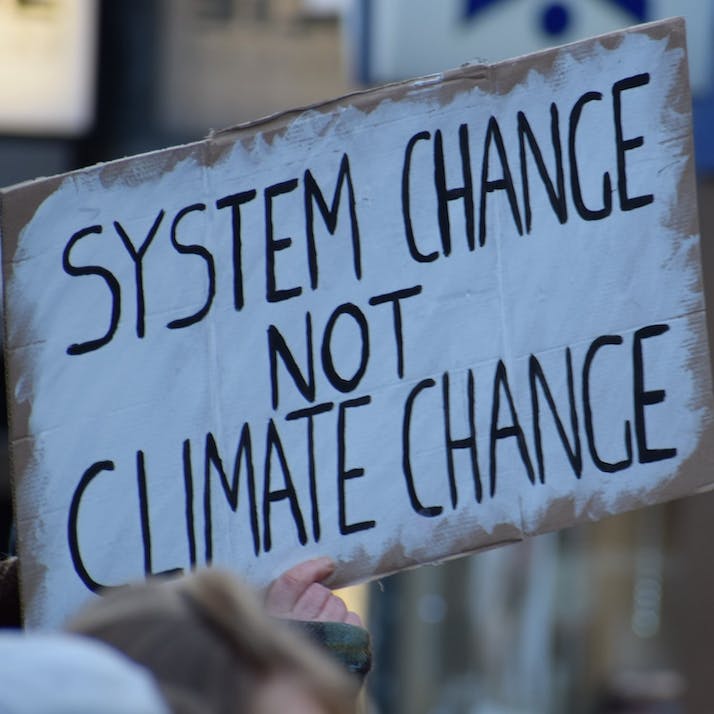 Why Social Media Is a Bigger Problem Than Climate Change

Ever wanted to know what happens when you combine 40mg of Adderall, six grams of dried psilocybin mushrooms and a menagerie of stiff cocktails together? Well, I can tell you. The answer is a hallucinogenic experience so jarring that watching the movie Inception two years after the fact resulted in convulsive PTSD flashbacks severe enough to require medical sedation. It is one thing to conceptually identify with a man wandering a barren landscape lost in time. It’s entirely another thing to emotionally relate to it. To feel it in your nerve endings. To physically know what it is to be trapped in a brain box for what feels like seven years only to find out that barely seven hours has passed.

Don’t worry. This article isn’t going to be about the musings of some guru spiritual hipster extolling the virtues and prophetic wisdoms they brought back from that “one time at Burning Man.” In fact, the only thing more traumatizing than a hallucinogenic trip like the one I experienced is to have to sit and listen through someone else tell you about theirs. The point is, I was incredibly lucky I didn't permanently scramble my cerebral eggs. To hear a neurologist describe it to me, it was as if I put my consciousness in fifth gear overdrive and full speed reverse at the same time, essentially splitting the hemispheres of my brain in two.

There is perhaps one keen insight about systems problems to be gleaned from this experience though. Or rather, a framing device or metaphor to help us rethink how we view our conceptual landscape and the problems we face as a nation and a globe.

My argument in this essay is that we are confusing systems problems from conceptual, epistemic problems. Adderall problems and acid problems. And that if you ever want to have a shot at solving the big system's problems like climate change, you gotta make sure you aren’t in the middle of a societal acid trip.

To explain, I need to unpack some physics first.

“”
The answer is a hallucinogenic experience so jarring that watching the movie 'Inception' two years after the fact resulted in convulsive PTSD flashbacks severe enough to require medical sedation.

How to Achieve Infinite Knowledge

According to physicist David Deutsch, “All fiction that does not violate the laws of physics is fact.” That is to say, with enough knowledge, all things are not only possible but inevitable. With enough time, attention, resources and knowledge-creation, any problem can and will be solved.

In more relatable terms: If the nerve endings that send pain signals to your brain aren’t working properly, you can touch a flame and not realize it’s burning you. The knowledge that “fire is dangerous” is never actualized. And individuals or groups that don’t respect the dangers of fire don’t last long enough to pass their genes on.

These error-correction processes aren’t confined just to our biology though. All of human civilization is built on top of them. A tribe’s evolutionary fitness is highly correlated with how precise and coherent their ECPs are. They’re the processes that tell a group whether they are heading in the right direction or the wrong one, or whether their maps of reality are useful or not. Some of these feedback loops play out in nanoseconds, while others can take centuries to unfold.

It follows then if we put Deutsch’s rules together we get this equation:

{Knowledge + Error Correction Process} x {Time + Resources} =  Anything your mind can dream up.

Adderall problems always come with trade-offs of course. The time, resources and knowledge-creation spent towards one problem will come at the expense of other resource-sensitive sectors. But they are still solvable nonetheless. Adderall problems are infinity problems, and what history has shown us is that as long as there is a reliable ECP (error-correction process) implemented, humans can be quite ingenious when solving for infinity.

If we are to accept all the climate change doomsdayers premises as true, and this is in fact the most catastrophic and existential Adderall problem our generation faces, then all that's really left for us to do is to metaphorically decide to go to the moon. To make the decision as a nation and a civilization to try and lower the temperature of the earth. (Cue Aerosmith’s Armageddon soundtrack.)

But what if the very mechanism that got us to that decision point is broken? What if our cultural ECP has a virus? What if our knowledge-creation gets bounded inside the epistemic acid trip? If we get stuck wandering the imaginary wasteland confusing seconds for hours and days for years?

This is precisely the current crisis we find ourselves in. The filter through which we mediate our beliefs and values and ideas about the world around us is preventing our ECP from performing efficiently. We can’t decide whether or not to go to the moon. We can’t even decide on whether the moon is real.

That filter of course is social media. And these epistemological crises are incredibly difficult to solve, precisely because they are immune or indifferent to increased focus, attention and resources. In fact, sometimes more energy and focus can make the problem worse. Instead, this is an acid problem. A problem that requires distance and reorientation and perspective rather than focus and attention. A problem where no progress can be made until we get out of the Inception acid trip.

“”
Imagine for a moment that we’d had social media during the lead-up to World War II.

What Do We Do When Reality Breaks Down?

All liberal democratic societies rely on consensus-making in order to utilize knowledge-creation and to solve problems. When the ECP breaks down and we can’t converge on even the most basic facts regarding reality, our ability to solve the big system's problems breaks down with it. We become trapped in a world of non-convergent relativization—the world of the Mad Hatter.

Imagine for a moment that we’d had social media during the lead-up to World War II. Twitter and Facebook trending pages would have been littered full of hot takes and op-eds:

“Hitler isn’t the real threat—Stalin is!”

“Why are we worrying about the rest of the world when we can’t even take care of our own citizens?”

“War with Japan is racist!”

“The Manhattan Project is just another example of a liberal big government spending program!”

“Nuclear arms production is sponsored by George Soros in order to protect the Jews!”

These headlines would bounce around the platforms, reverberate up through the broadcast news and ultimately end up shaping the worldviews of the very legislators making decisions on these issues. Depending on how committed to a particular media narrative their constituents were, these same legislators would then adopt those narratives as their own public-facing “truth” in order to garner votes and increase enthusiasm among their base. (See: QAnon congressmen and women.)

Whether these legislators actually believe their constituents' narratives or not is irrelevant. What is important is that there is no evolution or error correction taking place, just closed loops that refer back only to themselves. Without feedback loops that are anchored to an external reality, everything turns nonsensical overnight. We all become unwitting hostages at a Mad Hatter tea party.

This is precisely where we find ourselves in history. Our cultural ECP is now subservient to our new social media reality, a reality that distorts our conceptual measurements. Days to month. Months to years. Our nerve endings are misfiring: pain is good, up is down. It’s the Mad Hatter assuredly telling Alice, “I’m under no obligation to make sense to you,” and then multiplying that phenomenon across the entirety of Western civilization. It is an acid problem on a global scale. Social media has induced the entire world into an LSD trip and given us permission to assume that our individual distortions represent an accurate map of reality. We are all Leonardo DiCaprio washing up on the shores of our consciousness each morning. We are all the spiritual guru incessantly telling each other about our trips, insisting that they represent reality.

Where to Go From Here

In our new ECP-defunct world, every new data point unearthed can be contorted and warped to fit a Mad Hatter ideology. Every news item and scientific article’s authenticity and validity can be called into question and presumed fraudulent. Fake News! Conspiracy! Social media has given us just cause to question the legitimacy of our ECPs altogether. After all, how do you know anything is real anyway?

If you think I am being hyperbolic or over-exaggerating my case, consider for a moment that it took an incredibly small amount of time, money and sophistication to convince a not-insignificant portion of the Western world that Bill Gates caused COVID-19 and wants to microchip all of us for nefarious reasons. And Gates, one of the richest men in the world, was powerless to reverse this conspiracy once it gained traction.

The greater the demand for Bill Gates conspiracies, the greater the number of articles and tweets and content validating the conspiracy populated the internet, ensnaring more and more followers into its net and increasing the demand again as the cycle repeated itself. The ECP is broken. The system becomes reflexive and referential only to itself.

Even more so, the Bill Gates conspiracy narratives are relative child’s play in comparison to what is hurtling towards us in the coming years: deep fakes, synthetic media and nation-states investing in weapons-grade information warfare systems. Meanwhile, the only countries that get out of this unscathed are the ones who don’t need their citizens to have accurate maps of reality and, in fact, are better served when they don’t (i.e., dictatorships and authoritarian regimes).

As long as social media continues to be the lens through which we filter our reality, we will continue to be stuck inside of Deutsch's bounded system. Powerless to escape. Incapable of unleashing the potential of unbounded knowledge-creation.

The greatest problem facing our generation, then, may not be a cinematic and heroic Adderall problem. Getting to the moon. Defeating the Nazis. Solving climate change. Rather, our great struggle is a slippery acid problem: an epistemic war, a battle that sees us struggling to find a way to repair the very mechanism that allows us to stand a fighting chance against all the Adderall problems in the first place. We have to find a way to rehabilitate our civilization's nerve endings so that we can all agree that fire hurts, ecosystems are fragile and a warming planet is dangerous.

Failing to do so will not only ensure our continued dysfunction around climate, but will all but guarantee we lose our capacity for knowledge-creation altogether. We’ll be handcuffing ourselves to chairs and getting drunk off mushroom tea at the Mad Hatter’s party for the foreseeable future. We'll be perpetually stuck in the bounded system, lost in DiCaprio's dreamscape, pressing the gas forward at full speed while also trying to reverse. To fail at this would be to forfeit infinity…indefinitely.