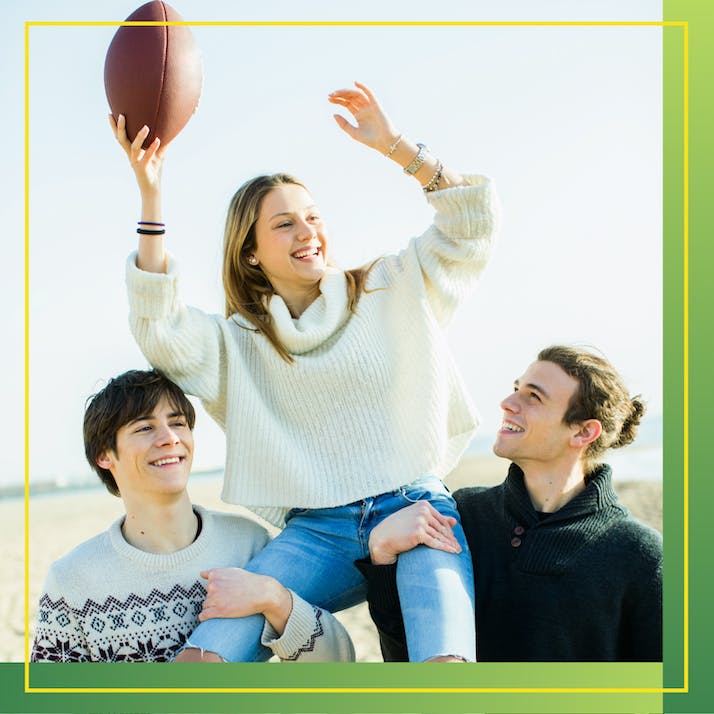 Being the Sister of a Pro Athlete Is Complicated

For all the great moments, there’s a lot of anxiety.

My younger brothers are both athletes. One is a professional football player; the other plays baseball in college. Being their sister is one of the greatest experiences anyone could ever have. The travel opportunities are fun, but you also get to see your brothers live out their dreams, and so many other things that probably would not have been possible otherwise.

While my experience has its pros, it definitely has its cons—just like anything else. When people realize who my footballer brother is, or that we’re related, the first thing they say is how cool it must be to be related to such an amazing athlete. Yeah—it is pretty darn cool. However, for me, it comes with so much extra worry and stress. My little brothers are two of my favorite people in the entire world. While I am thankful for the talent they have both been given, and the strong sibling relationships we have, when it comes to my brother’s job as an NFL athlete, I stress.

“”
When it comes to my brother’s job as an NFL athlete, I stress.

My Brother's Success Has Also Brought Me Stress

I’ve struggled with anxiety my entire life. I honestly wish I could say my brother’s job only brings me stress on game days, but it doesn’t. It is almost year-round, from training camp to making the 53-man roster, through every game day, to postseason, to OTAs and back round again. It all brings me stress. I worry about him making the team. And if he does, will he get enough playing time to prove himself? If he doesn’t, what happens next? Is someone going to pick him up? Is he going to move across the country by himself? What if he gets released after the season? It’s just question after question that constantly race through my head.

While it brings me joy to watch him do what he loves, I am always worried about him and his safety. On game days, I constantly pray for him to stay unharmed. Every tackle makes me cringe. I’ve seen him get injured many times—too many. I see how it affects him and it’s heartbreaking. It’s especially hard to watch when an injury ends his season. I always wish that I could take the pain away so he could go back to playing, that it was me who was injured.

Beyond the stress surrounding it, I have also begun planning my life around both of my brothers. I also don’t take any major vacations while he is home with us, since he’ll only be with us for a few short months before he leaves again. (However, with him living in a different city during the season, I have an extra reason to travel, and I like using away games as excuses to explore new cities). I wish it were as easy as just planning around football season, but I get to plan around baseball season as well, which is why I had a summer wedding—the last season I wanted it in. But who wouldn’t want her brothers by her side on her big day? That’s the more important part.

The spotlight that’s on my family because of my brother comes with extra responsibility. I don’t want to make it seem like we have some fancy image to uphold, but my parents have made sure we realize that we must be more cautious of our actions. Which I am always reminding myself of when I am physically attending his games, since my body language tends to get the best of me.

When people realize I am related to one of my brothers, they almost always bring up the other. And then most likely ask, “Well what do you do?” My typical joke in return is, “Oh, I retired young so my brothers wouldn’t have to live in my shadow,” which is just a sarcastic response to a sensitive subject for me.

“”
The spotlight that’s on my family because of my brother comes with extra responsibility.

I Don't Resent My Brothers for What They've Accomplished

Why do people automatically jump to the conclusion that I must have been some amazing athlete as well? I used to be athletic, don't get me wrong, but not like my brothers are. I used to take it personally, like I was being compared to them, or I was somehow “less than” my other siblings. Over time I have just grown used to getting this question—I almost expect it most of the time—and the initial sting from hearing it has just gone numb.

Besides the “What do you?” question, I have on occasion been asked, “Do you ever feel like you have been held back?” The answer is no. Could I have been more athletically successful? Yes. However, my success was completely up to me. I had the same opportunities as my brothers—they just worked harder. Their athleticism and success did not overshadow me or “hold me back” by any means. However, I do realize that this could not be the case for everyone in my situation, and each family of a pro athlete is quite different. There could be siblings out there who were not given the same attention. I can say that I am very thankful that wasn’t the situation for me.

I can’t lie and say my life wouldn’t be completely different if I wasn’t his sister, or if he wasn’t a professional athlete. Obviously, not everything about it is negative. (I do not even like saying that there are “negatives.”) It can make our lives more challenging, but it’s a situation that plenty of people out there, I am sure, would be happy to be in. So even through all my complaining—and I complain a lot—I do not take this for granted.

My brothers are a large part of my world, and I have loved being able to plan my life around them, because it means they are successful in something they love. It means they can do something not everyone is fortunate enough to do. Being their sister has given me such an amazing, experience-filled life that I wouldn’t trade for anything.