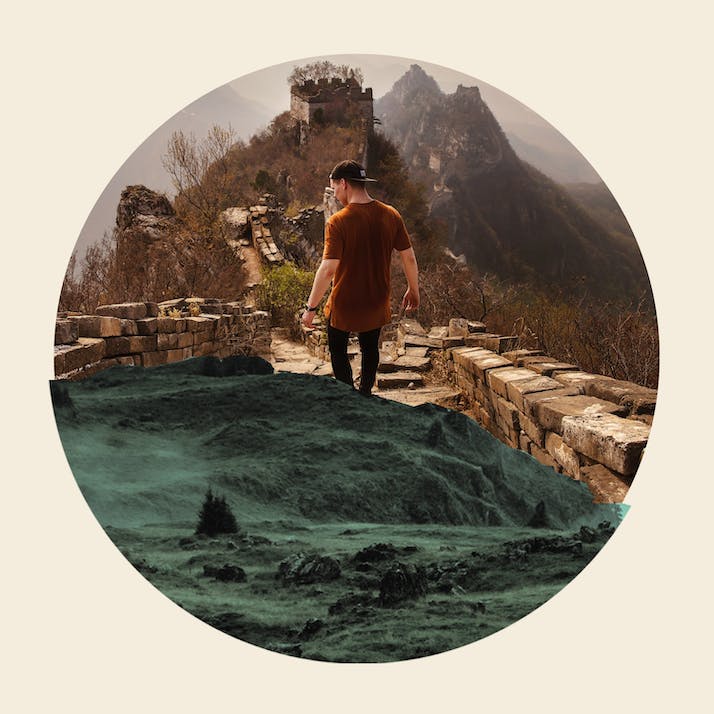 My girlfriend and I hiked to a remote portion of the wonder of the world. And then things got weird. Real weird.

It was my girlfriend Liv’s 21st birthday. Because I have ADHD, I naturally had forgotten to get her a present. That day I was meant to be meeting her to spend an evening drinking cocktails at overpriced bars. Instead, I spent a guilt-fueled morning gathering a collection of token presents for her, so she wouldn’t instantly remind me that I was the worst boyfriend ever. The problem was that none of the presents was quite “right.” After all, this was her 21st. I had to get her something spot-on.

Fast forward six months to the summer we were traveling through China. On one train ride, I had been flicking through a Lonely Planet travel guide when suddenly I saw my way out of the predicament of the present.

We’d just finished the summer teaching in Chinese classrooms and earning our TEFLs (Teaching English as a Foreign Language). Then a few weeks traveling the big cities: Shanghai, Chengdu, Xi’an.

In Beijing, I Finally Found a Nice Present: A Bag of Weed

By the time we got to Beijing, it was time to spring my surprise. I snuck out of the hostel early and spent the morning alternating between the fire that was the Beijing smog and the frying pan of Beijing’s smelly, crowded subways. I returned an hour or so later, feeling both lighter due to the pride that filled me and heavier for all the camping gear I carried.

I sat at the entrance to the hostel and got chatting with a traveling group. They were heading to Shanghai that day and had some weed on them. Do I want to buy it? They can’t risk taking it through the airport-style security you must go through to get on China’s high-speed trains.

Weed is especially rare in China. So, what do I say? “Sure!” This is a camping trip, after all.

I return to our room to explain to Liv what her birthday present is—a camping trip on the Great Wall of China. She asks me if it's legal to camp on the Great Wall. Not exactly, I explain. But it’s 13,000 miles long; they can’t patrol it all, right?

Our Journey to the Wall

If you ever go to Beijing and visit the Great Wall, you’ll probably go to Badaling. It’s the part of the Wall that you see in tourist pictures, all rebuilt and shiny new, prepared for your tourist photos. That was not where Liv and I went. We went up to Gubeikou—via six hours of bus rides with three changes. We’re trying to avoid being caught, remember?

So, we get to Gubeikou and to the gate that admits entry onto the Wall. No other English-speaking tourists must ever make it this far because the admittance attendant didn’t have anything to say to us other than “closed.” However, we hadn’t come this far to turn back now. Plus, I was still trying to redeem myself for forgetting my girlfriend’s 21st birthday.

As I said, it’s a big fucking wall. So, we simply walked away and began to climb again.

An hour and a half later, we had hiked high enough away from the small village below us and up onto the Wall. Our tent was made and basecamp was established for the night. Liv offered me a wink and a wry smile that said “Well done, you.”

“”
I’m not the live-fast-die-young type. Let me grow old in a care home somewhere.

Danger Lurks on Hidden Corners of the Great Wall of China

At this point, I pulled out the weed. It was pre-rolled so no messing about. We smoked and smoked and watched as the sun set. At that moment, we were a little pearl in a giant oyster of a Chinese summer adventure.

It is remarkable how quickly a picture-perfect scene can be so quickly disrupted by the eerie, unnerving descent of nightfall. For weeks, we had taught in classrooms and toured the big cities. Now, up here on the hills of remote China, it was quiet. Too quiet. Unnervingly quiet. There wasn’t even a dog howling at the moon.

Then we heard it. The sniffing

“What was that?” said a startled Liv.

I brushed it off. “Nothing, of course, just some animal.”

But the sniffing grew louder. Without any light whatsoever, it was too easy to let the shadows play with our imaginations.

“James,” Liv said, “What animals do they have in Northern China?”

We had Chinese SIM cards, so we quickly loaded up Google to settle our nerves. No such luck. Our search revealed that they have both bears and wolves in this part of China. Now we’re panicked.

We rush into the tent. Inside it, I try to collect myself. Liv has lost her head. She’s sharing her location to her group chat and telling her friends to make sure her mum knows she loves her. I interrupt that there’s no time to think about that now. Sending those kinds of messages would somehow make this whole nightmare more real.

I Probably Should Have Done More Research

How could I have been so stupid? Why didn’t I check? Surely this isn’t how I’m going to go? To a fucking bear on the Great Wall out in the middle of nowhere? I’m not the live-fast-die-young type. Let me grow old in a care home somewhere.

“Liv. What if we get outside of the tent?”

Liv looks at me like I have lost my mind. (At this point, there’s a good chance that I have.) If it merely smells us, it might come to investigate. But on the other hand, if it sees us, then it might turn and leave us alone and go hunt some smaller prey. Between us, we can look big in the dark, right?

She leans forward and says I should go first. We find the time to rock-paper-scissors. My heart is banging.

I lean forward. Liv lets out a scream with anticipation. I turn around to shush her sternly, fully aware I have no idea whether a scream makes a situation like this better or worse. There is no precedent for the process of my decision-making. Every reaction is now a hot mess of instinct, conditioning and my brain scrambling to piece together any scrap of Ray Mears and Bear Grylls that I’ve caught over my life.

The sniffing grows ever louder. It’s screaming in my head over against the absolute silence from a petrified Liv in the corner.

I lean for the zip. I take several attempts to grasp it because my hand is shaking so much. Eventually, I manage to steady my nerves long enough to take hold. Do I do it slowly or all at once, like a Band-Aid?

Band-Aid. Go! Zip open. I clamber out. My best foot forward. Or kind of forward. It's shaking so much that it oscillates six inches either way with every inch that I creep forward.

I see what’s going on and my brain pieces it together even though it’s forgotten all other functions. I scream. Liv practically backflips in fear. She has no idea what I’ve seen.

The weed’s got us way too high. I still hear the sniffing still but it’s not a bear or a wolf.

It’s a rabbit. A big rabbit I must say, but a rabbit, nonetheless.

“”
My nervous system managed to spare me just a little blood for one essential purpose.

I turn to her with a huge smile on my face. I can’t even explain at first. God, it really is the biggest kind of rush thinking you’re going to die. Now don’t get me wrong. At this point, I realize I never was in any actual danger, but I thought I was. I genuinely believed I was going to die and so my nervous system acted accordingly. Blood had drained away from every non-essential area and was coursing through my body. I mean coursing. My heart was throbbing right into the underside of my ribcage.

I started to laugh and I just. Could. Not. Stop.

Liv looked angry, as if she were going to kill me. Still laughing, I leaned in and kissed her. It was meant to be a quick kiss. A reassuring kiss. However, the combination of adrenaline and relief, it turns out, makes for a potent aphrodisiac.

I tried to pull away, but she pulled me back in. She kissed me hard. I could feel her breath panting. There was something in her breath, a heavy breath outward, the kind that would usually be rude, right in my face. She opened her eyes but didn’t look up when I pulled away.

A switch in my mind just flipped. My heart hadn’t slowed down from the scare, but my nervous system managed to spare me just a little blood for one essential purpose. And so it went—the hottest, most passionate, most animalistic sex that I ever had. There we were, young, alive and fucking on the Great Wall of China.