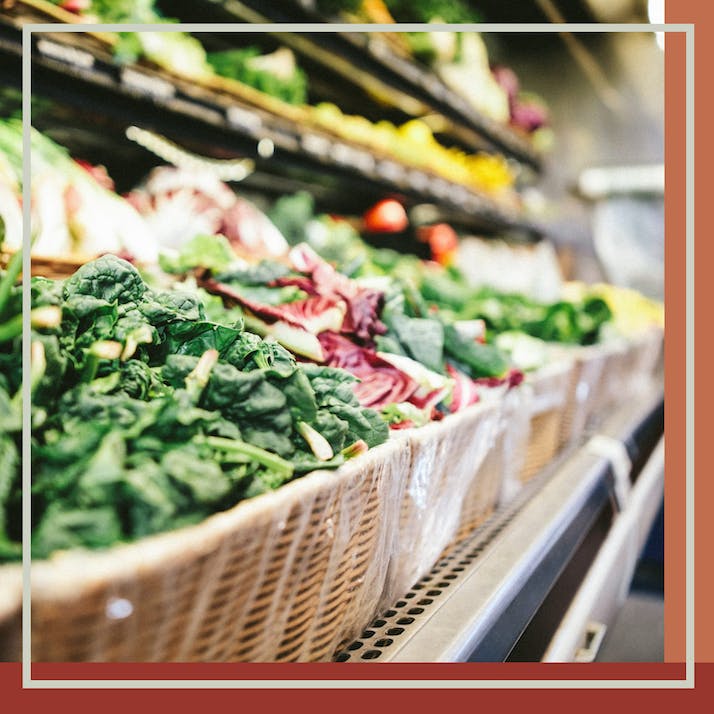 The Secret to My Health Was at the Grocery Store, Not the Doctor’s Office

I always believed in Western medicine, but then a nutritionist helped me discover the source of my symptoms.

It all started with an itchy patch in my gluteal cleft—my butt crack, in layman’s terms. It continued to spread, an angry red swath of skin that was equal parts itchy and incredibly painful when I tried to scratch. Thinking it must be a yeast infection that migrated south by mistake, I tried every tube of anti-fungal ointment that my local CVS had to offer.

Nothing worked, and the patches continued to spread, onto my genitals, then legs, then back, then ears, nose, eyelids, breasts, underarms, hands and lips, until I was a miserable, unsightly wretch. The first dermatologist I went to, a Harvard Medical School diploma glinting on her wall, said that it looked like dermatitis—a fancy word for swollen skin that doesn’t point to any particular cause. She sent me off with three expensive prescription creams that did little to alleviate my symptoms.

Then I went in for a biopsy with another doctor, who suspected it could be psoriasis, an autoimmune condition characterized by a hyperactive immune system that begins attacking the skin, causing it to rapidly create new skin cells at a rate up to ten times faster than normal. The new skin cells build up, unable to shed quickly enough, causing the signature red, itchy, scaly patches to form. He was right.

He broke the news that this was a chronic condition that I’d likely be managing for the rest of my life. The prognosis was relatively bleak: I could try specific topical treatments that were extremely effective, but being on them for longer than a few months at a time put me at higher risk for cancer. Then there were injectable drugs that intentionally weaken the immune system, costing tens of thousands of dollars, which have a whole host of other potentially life-threatening side effects.

“”
Within just one appointment, she asked me to radically upend my diet.

A Friend Recommended I See a Nutritionist

This was all that Western medicine had to offer me, and I was exasperated. I had already felt extremely depressed, brought on by self-esteem that was practically nonexistent because of my unsightly appearance and the accompanying shame spirals that went along with realizing that I cared so much what I looked like, letting it rule my life. Now I was left feeling like the medical establishment wanted nothing to do with me, like I was a problem they were too ashamed to admit they couldn’t solve.

Finally, a friend recommended her nutritionist to me, and I gave it a chance, willing to try anything, even though I had been brought up to believe that doctors were the only ones who held the keys to optimum health. Within just one appointment, she asked me to radically upend my diet, which was relatively healthy to begin with. Having no other options, I obliged.

It started with a three-month abstention from gluten, dairy, sugar, fish high in mercury, alcohol, spicy food, nightshades (a family of plants including peppers, tomatoes, eggplants and white potatoes) and coffee. I was also to abstain from cooking with oil (I could add it to foods afterward, but cooked oil has toxins). I was to start my day with celery juice (full of phytonutrients), lemon water (to detox) and a whole host of vitamins and supplements. I was vegetarian at the time, but I added back grass-fed beef and organic chicken because there was so little else I could eat.

The first ten days, I cried a lot, which happens to be a symptom of withdrawal from sugar. The following months were hard and often socially-isolating, as I couldn’t indulge in a coworker’s birthday cake calling to me from the office kitchen or even go out for a nice meal with my boyfriend. I actually saved money, despite spending nearly double on groceries from the fancy organic shops.

It wasn’t quick or high tech or sexy; it was mundane and so slow it was practically imperceptible. But my nutritionist was right, and, even when I doubted her and wanted to quit, after many months of munching on raw fennel and pretending that 100 percent dark chocolate tasted sweet, my skin healed. In fact, not only did it heal, but I was met with a whole host of other benefits, from clearer skin to stronger hair, more energy, less anxiety, increased athletic performance and a ridiculous libido.

Food-as-medicine was never an avenue considered by the three dermatologists I saw before I sought other nontraditional, non-Western avenues of care. They never once asked about my diet, a pillar of health that likely has a greater impact on curing—and preventing—disease than any modern remedy we have at our disposal.

On a macro level, we all know that a salad is better for you than a brownie. But on a micro level, we don’t often think about how the vitamins, minerals, complete proteins and healthy fats we ingest are the only resources our bodies have to carry out everyday functions on a cellular level, whether it’s regulating hormones, thinking thoughts or growing fingernails. If we’re not supplying our cells with the proper array of nutrients, we won’t be functioning properly. At best we’ll feel like shit, and at worst we’ll get sick.

“”
On a micro level, we don’t often think about how the vitamins, minerals, complete proteins and healthy fats we ingest are the only resources our bodies have to carry out everyday functions on a cellular level.

The Right Ingredients Can Build a Healthy Foundation

My illness and epiphany are not so unique, except for the fact that they happened young, in my early 20s. As I get older, I’m watching more and more of my friends join the unfortunate club of chronic disease, coming down with everything from Candida infections to cystic acne, from Crohn’s to depression.

They get frustrated with the lack of care options and disillusioned with Western-trained doctors treating the symptoms instead of the root cause, playing whack-a-mole as new problems pop up but never catching the proverbial rodent underground. Finally, they also search for other ways to heal themselves, ultimately discovering what I know in my bones to be true—that a nutritious diet is the cornerstone of vibrant health.

It gives me hope that we are unintentionally creating a sort of grassroots movement towards building the healthcare system that we want to see and one that doesn’t rely on a house of cards built by insurance companies and expensive drugs. We are returning to the simple, ancient conclusion that we can heal ourselves if given the right ingredients. If we listen closely to our bodies, we can find the answers we desperately need in order to heal—not at the pharmacy but at the farmer’s market.

Get Well SoonBread and Butter