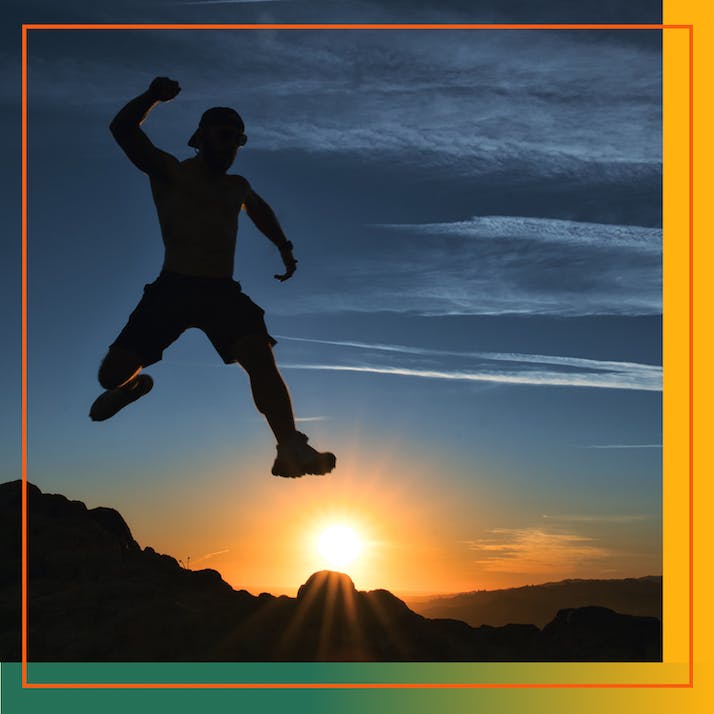 Running a Marathon on No Sleep and Lots of Drugs: Discovering the Edge

My mind kept putting up walls and telling me to rest, but I resisted and broke my body’s boundaries.

I have always been fascinated by the depths our bodies can endure. The duality of our mind both creates walls and destroys them. When we are tested, we are capable of much more than we think. This train of thought has led me down a path of all different self-experiments and, in the summer of 2018, a perfect storm of sleep deprivation, drugs and an ultramarathon led me to discover “the edge.”

It began at my business partner's wedding, a beautiful affair on a sunny Saturday afternoon in Upstate New York. In three days, I was due to race an ultra-marathon on the other side of the country in the Nevada desert at Burning Man. I had the best intentions to behave myself at the wedding, but one cocktail turned into several, then someone slipped me some ecstasy and mushrooms, and the evening was off to a wild ride.

The night raged on and culminated with lovemaking at sunrise with a lady friend on a mattress we pulled out of a dusty supply cupboard. Sunday morning delivered one of those ghastly headaches that open bars at weddings are famous for. I ambled my way back to Brooklyn to pack for Burning Man. By the time I packed, I’d managed to eke out three hours' sleep before flying to Portland to collect our RV.

I told myself everything would be fine.

“”
Then someone slipped me some ecstasy and mushrooms, and the evening was off to a wild ride.

Traveling Kept Me From Getting Any Sleep Before the Race

We arrived in Portland on Monday around lunchtime and picked up our RV. The race was in 17 hours and maps said it was a 12-hour drive. We hit the road stopping only for fuel and supplies. We carefully hid a considerable cache of recreational drugs intended to last us six days at the Burn. My friend and I split the driving and, around sunset, I started to hit my first wall.

A wall for me is an overwhelming feeling of exhaustion. It’s the body's “low battery” warning. I tried to nap, but by the time I found a comfy position in the RV, it was my time to drive again. I cranked a Red Bull and some techno music to find a second wind. We arrived at the famous Burning Man traffic jam around 3 a.m. By the time we were through the gates, only an hour remained before the race.

As I laced up my shoes, I hit my second wall. Three hours of sleep in three nights started to catch up with me. Imagine the finish line, I thought. I trudged towards the start line. Butterflies formed in my stomach, adrenaline coursed through my veins. The energy of 300 eager ultramarathoners brought upon a much-needed third wind and I was ready to race.

When people say Burning Man has something for everyone, it’s true. If your thing is subjecting yourself to a sustained battering of your legs, aerobic system and mind, then there’s an ultramarathon for that. These are the deranged masochists of Burning Man. Many are dressed in costumes. There are tutus, a Superman, a leprechaun. One guy is fully naked except for his shoes. The race is four full laps of the festival. I told myself I am exactly where I am supposed to be.

Running is an easy sport. The only real thing you need to do is not stop. Some say it’s the art of dying the fastest. The hard part is convincing yourself to not stop. Your mind wants to throw up walls and convince you that you are in danger and should no longer go on, but the mind also has the power to overcome. It’s as much about inner strength as it is about outer strength. Mind over body.

At 5 a.m., the starting bell rang. We made our way through the dark campsites and out onto the playa, full of lights, art, cars and music. The Milky Way bore high overhead. By the second lap, light appeared on the horizon, and the sun rose over the playa revealing revelers who were still partying from the night before.

By lap four, the sun blazed overhead. I found myself sitting in 11th place. At 42 kilometers in, I felt a third wall coming on. My legs started to feel heavy. My mind convinced me that I was doing some permanent damage to my joints as my knees and ankles screamed in pain. My lungs stung from the heat and my eyes were red from the dust. My pace slowed to a crawl with the finish line in sight. I told myself to keep going but the body refused to listen. I stopped.

At this point, I heard measured panting from behind. A fully naked man in his 50s slowly jogged past me. I tried to move my legs to keep up with him, but my legs had no more to give. There is a slow sad irony of being overtaken by a naked man in a marathon. You can’t help but check out his dusty tanned butt cheeks as they slowly pass you. A strange torture.

In the wake of his cheeks, I found a fourth wind. If a naked man could finish this race, so could I. Using energy conjured from an unknown source, I found the willpower required for the last eight kilometers. Shattered and dusty, I rolled into the finish line in a little under four hours. An honorable finish considering the sheer lack of sleep. My friends were there to greet me.

It Took Four Days for My Body to Reach Its Limit

It was 9 a.m. and my crew was rested and ready for action. Someone slipped me a tab of acid and we were off on our bikes exploring the playa. The acid and excitement of exploration brought on a fifth wind. The acid negates the exhaustion and we bounced from party to party. With a little top-up of ketamine, we headed off to a sunset dance party. By the time 4 a.m. rolled around, I was in awe of my body. Still standing and into my fourth sleep-deprived night. Alas, the sixth and final wall hit me. I knew this experiment should end. Delirium overtook me and I asked my friend Nicole to escort me safely back to camp. We zig-zagged home and on the final turn before our camp, the world turned black.

Nicole dropped her bike and raced over to my dusty, tangled body. She removed my bike from on top of me as I regained consciousness. My eyes fluttered open and I saw a frightened look upon her eyes. I laughed like a hyena. “What’s funny?” she said.

“Only those who have been over the edge know where the edge is,” I said. “And we found the edge.”