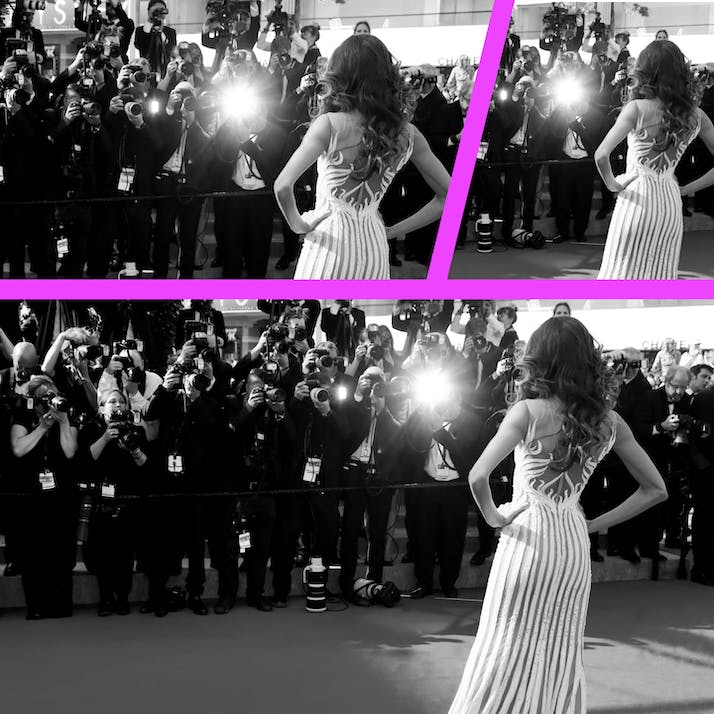 Working Red Carpets Is a Nightmare

Assisting celebrities and attending parties seemed like a fun job, until I saw the reality of the entertainment business.

The Girl with the Dragonfruit Tattoo / Millennial / Progressive / Creative

Like many wide-eyed dreamers, I found myself in New York City waiting for the train in a piss-stenched Manhattan subway platform at 21 years old—cold, miserable and broke.

As I watched trains pass and crowds collide, I often questioned whether I was just tired or actually wanted to die. I had been up since 5 a.m., spending my day on set as an unpaid production assistant, or a script supervisor, or perhaps I was building props. Maybe it was a late night, and I’d left my apartment in the afternoon to attend my second job, where I guided celebrities down the red carpet at big-name movie premieres and sat special guests in the seats. Either way, I knew one thing: This lifestyle wasn’t sustainable.

I Moved to New York and Chased My Ambition

Two summers ago I decided to move to New York City; it had been a pipe dream for a while as a young theater kid turned pop-culture-obsessed adult. I came close to moving once before, picking up an Americorps gig right over the Hudson River in Newark, but I ended up leaving early. I returned to live with my father after long commutes became combined with the dread of working in an industry (education, at the time) that I felt zero passion for. But this time, I enrolled in a graduate school program focused on media and creative industries, as I was otherwise reassured that my communications degree would get me nowhere.

During my first night in the city, I called my father crying, yearning to return home. I moved into a tiny third-floor apartment in Northern Brooklyn that I shared with three—sometimes five—roommates. It was the middle of the summer. I saw cockroaches scurry across my barren bedroom floor and heard scratches in the walls, which may have been my subconscious tricking me (the interior of my building was filthy and I had definitely seen a gaggle of rats in the entryway). “They don’t show the actual roaches and rats in rent,” I cried into my phone, cursing myself for my ignorant idealization of the starving artist trope (and my year-long lease).

Otherwise, I was blessed and settled into two jobs very quickly. One was a retail position at a Soho pop-up shop for the television show Friends. The company that hired me also staffed the merchandise booths at a good amount of Broadway shows. I had my “in” and I had it quick. The second job I nabbed prior to my move—a special events assistant that helped primarily with red carpet movie premieres. I remember the post-interview build-up after I got the job, despite the warning messages on Glassdoor forums. “It’s a really cool opportunity,” the interviewer assured me over the phone. “We get really busy most months, especially during awards season.”

Throughout the moving and settling down process, I channeled a similar kind of energy and excitement—a giddy optimism that comes with finding yourself for the first time. At this point in my life, I was living independently and I was truly exploring my interests and dislikes—my sexuality, my love for sipping cocktails in dark bars, my introverted nature. With graduate school, there is no big mixer or forced days filled with icebreakers: I was a new girl in a new city. I gushed about this to my friends online and offline. “Yeah, movie premieres. Big deal, huh?”

My first premiere was a walk in the park. I was assigned to seat guests at a small premiere for an Alec Baldwin movie. He wasn’t in attendance, but actor Matt Bomer showed up last minute and we quickly arranged the accommodations to get him a prime seat in the house. I stood in my designated area and observed him boast to his friend, “Want a chickpea? I brought my own snacks.”  It remains one of my keenest moments.

The next premiere was for a movie starring Benedict Cumberbatch. On red carpet duty, I escorted the movie’s director, a short, stout man, through photography and interviews and joked to him, “You survived the hard part, now you get to go enjoy your movie!” Nothing frazzled me at this moment. Cumberbatch arrived later and was as handsome and suave as expected. He made small talk to the three of us standing there before gliding around the carpet. It was simple. I stayed quiet and did my job. I watched the other women chat about their outfits and their high-profile jobs and what auditions they went to that week. I noted how one of the other workers wasn’t in dress code.

The following premieres were a blur. I grew more confident and found myself exchanging pleasantries with my coworkers and bosses. The founder of the company began showing up more, only ever popping in to berate staff. Whispers of “he scares me” filled each room. Months down the line, I was invited to work an after-party and jumped at the prospect. It was another all-star event—a motivator that I still don’t understand to this day. What was I expecting? A Disney wish-come-true? To be discovered as a low-level employee who is secretly harboring some worthy, forbidden talent?

During the tour of the after-party venue, my supervisor scuffed up a placemat. We stood there and watched her call over the newest coordinator to scold him. She made him hustle to pull it back together. Later that night, I was sent messages of varying degrees to “make sure all of the guests are comfortable,” and to “make sure they are all sitting in their labeled seats,” but “don’t be too direct, just make sure everybody is having fun.” It was overwhelming to say the least. The cherished workers stood around drinking cocktails and mingling, occasionally biting at me to fix a placeholder or to rearrange the tables. But I told myself in Liza Minnelli’s voice, “That’s showbiz, kid.”

“”
Recurring moments like this taught me this lifestyle is unsustainable, and that the constant promotion of fake it until you make it is incredibly harmful.

The Glamour of My Job Quickly Wore Off

One of my most harrowing experiences came after an event in which Sarah Jessica Parker attended. She was the caricature of New York City herself, the leading image of all of my Sex and the City fantasies. After the guests were seated and the movie began playing, all of us gathered in the venue’s entrance. This was the first time I was in a group that was invited to eat the fancy leftover food from the reception.

“Did you guys see Sarah Jessica Parker’s shoes? They were gorgeous. I just wanted to hug her,” I gushed happily.

“Well, I hope you didn’t,” one of my co-workers, a woman who had worked there for much longer than I had, responded. She was close friends with two of my supervisors.

“I mean, of course I didn’t.” I said, avoiding eye contact as she stared at me skeptically. I had basic sense, I read the same handbook as everybody else.

At this moment, my facade slipped. I wasn’t a gritty, unbreakable New Yorker. I wasn’t a child of a movie producer, just working to get a better feel of the industry. I didn’t have a high-paying job at Viacom. I stood around the table and watched the final slider not be eaten. I turned to the woman next to me who had hardly eaten. “I’m a vegetarian, so I’m not going to eat it,” I joked.

“I wasn’t waiting for your permission,” she told me, not looking up from her phone. “I’m on a diet.”

These interactions weren’t idiosyncratic. At first thought, I am reminded of the time where Jessica Walter, the matriarch from Arrested Development, yelled at me for asking to see her guest’s ticket. My assignment was ticketing and I had no idea who the guest was as the two arrived at very different times. My job was simply to look at tickets and see if they had a reserved seat or not. I remedied the situation by grabbing her sparkling water and some popcorn, despite it being a self-served event. I’m also reminded of actor Patricia Clarkson getting worked up because I asked if I’d spelled her name correctly on my whiteboard (used to help photographers identify talent), when I saw her give it a funny look. “If the photographers don’t know who I am by now, my entire career has been a waste.”

The Industry Attacked My Worth and Self-Perception

Recurring moments like this taught me this lifestyle is unsustainable, and that the constant promotion of “fake it until you make it” is incredibly harmful. I slowly felt my passions and my buoyancy fade away. My days and nights became filled with pretending like I didn’t care, and watering myself down to fit in with pseudo-socialites and privileged members of the upper-class—people generally able to live their life with little care because of their profession. Meanwhile, the only space I have in my closet-sized kitchen is for frozen meals from Trader Joe's, and every night I sleep caressing a can of Raid.

These last few months have provided me with many moments of clarity. I have been without a job and the recipient of endless rejection letters since March. I’ve reflected on the good and bad of my experience, and found myself at a stalemate, knowing whole-heartedly that my life’s work has been altered.

I’m a transparent person. I rarely have to question my authenticity. I am malleable and breakable. Many people assume my hopefulness, wonderment and awe gets in the way of my expertise; they instantly place me in a box labeled “fragile and incompetent.” Maybe there’s a place in this glamour-driven industry for me and maybe there isn’t. However, what I know for certain is my worth. I will not allow it to be faked and watered down to placate those who can’t be bothered to remember that we’re all composed of the same cells.