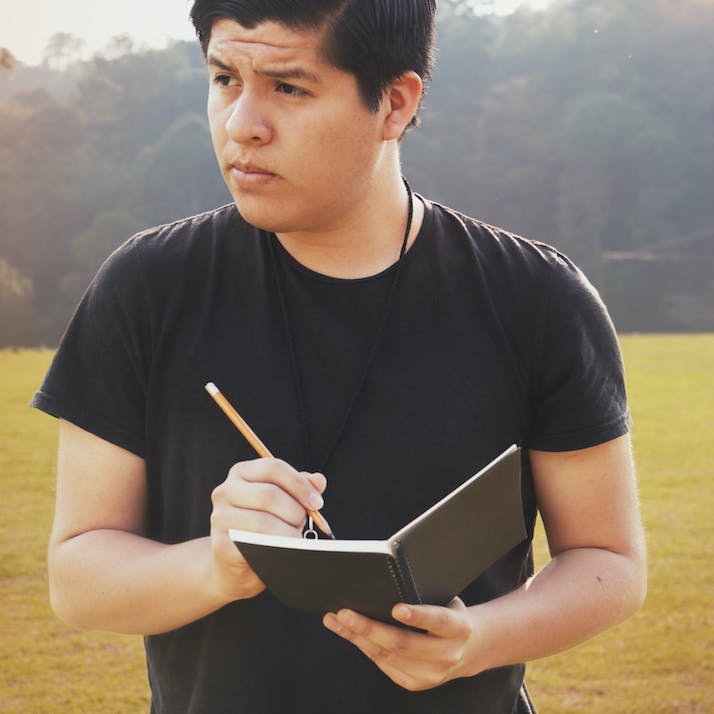 A Muslim Arab man confronts American education and journalism, both of which he finds to be inherently racist.

Do you ever, in the middle of a conversation, have your mind stray to fantasies about what it would feel like if you headbutted your professor? Or perhaps the colleague slaving on the desk right next to yours? Maybe a family member?

I do, a lot, ever since my brown feet stepped into an American university eight years ago. Now, after five years in journalism, the imagined sound of a racist’s nose cracking brings me more calm than ever. In fact, not even a borderline Xanax overdose could relieve my 20-year-old insomnia better than imagining myself piledriving a colonizer or an Uncle Tom on a diamond slab. You see, I’m a Muslim Arab suspended between two of the most racist and imperialist fields in America: journalism and academia.

My existence in these fields is what I like to call a pendulum-piñata—I hang by the noose, swinging to and fro, taking hits from both sides. I’m only as useful as the sugary goodness that’s smacked out of me and if my candy proves flavorless, it’s either because whoever consumes me doesn’t understand what I’m supposed to taste like or they’re trying to control my flavor.

The 12-year-old me who first fell in love with writing couldn’t have imagined that things could turn out this way. Now, I at least know what I want for my future—a place where writers like me aren’t ravaged with the distressing, depressing and dehumanizing faces of white supremacy, where our stories fill pages with color and no white space.

“”
I’m a Muslim Arab suspended between two of the most racist and imperialist fields in America: journalism and academia.

I Grew Up With America, But Not in It

I wasn’t always like this. In fact, I only realized I was brown when I came to the States. As a kid in the desert, most of what I consumed was American comic books and hip-hop culture. All of my teachers growing up were white Westerners. People like me grow up under U.S. hegemony, the products of centuries-old power dynamics—from the halls of Montezuma to the shores of Tripoli, from the Age of Exploration to the postcolonial world, with every form of Orientalism, imperialism and racism in between. But being in America isn’t the same growing up American.

It’s not like I didn’t know. We were raised on everything American, so I must have had some idea—I had no other choice. I suspect those moments when I thought I didn’t know were probably intentional.

I consumed more than enough American culture to know how transcendent racism is, and more than enough to know that the U.S.’s participation in the wider world was just an extension of how it treated black people.

However, like most of us seeking a better life here, I was blinded into thinking this nation would reciprocate. I was a fool in thinking it would see me as a human—not just a shadow of one.

Almost ten years ago, a few days before graduation, my high school class was sharing the universities we’d be going on to. After praising our acceptances, my white American homeroom teacher asked us, “So aren’t you guys afraid of living in America?”

He paused, I remember. “You know,” he quickly added, “All alone in a new land and a new life?”

Our teenage selves paid no mind to his wording, which, in retrospect, was either chosen to lament and foreshadow a reality where brown folk hold no power or, just as likely, to subtly mock our private-schooled, spoonfed little selves.

It was the time of the Arab Spring, when the political sentiments of a post-9/11 War on Terror world were more laudable and visible than they are now, a time before diversity programs and inclusive hiring became so fashionable.

People are far more critical and outspoken these days, but these sentiments still exist. In my experience, they still soar behind the clouds of academia, through the Fourth Estate’s true-blue liberal skies.

“”
Being in America isn’t the same growing up American.

I do remember how one classmate answering the question. He said, “Sir, last night I watched Remember the Titans, the one where Denzel Washington coaches a football team of whites and blacks, and I think the way it ended is what America is now.” He went on to ramble about interracial fraternity, which our teacher greeted with an apathetic smile and spiritless nod. It’s an image that’s still ingrained in my mind.

“Titans.” A word that makes me hiss whenever I hear, speak, read or write it.

The Titans, divine creatures from whose essences the world was supposedly made. Some were subjugated by old, white man Zeus and some were slaughtered. Some, like Prometheus, served him. The Titans, the nonwhite students and journalists who are both studied and journaled about. The Titans, who seem to exist only to serve a self-fulfilling prophecy, where at best Zeus is a god offering salvation through slavery, or at worst a pimp offering liberation through whoredom.

I learned from my own pantheon of Olympian subjugators. There are white professors who privately made bomb jokes and white students who mimicked the contrarian racism of any curricula. There are white peers who hum along to the cacophony of journalistic malpractice and white friends who think “dune coon” or “sand nigger” are just jokes. There’s my personal favorite: white editors who favor objectivity so much that they’ll publish a story about a neck and a sword, only to begin and end with the latter’s perspective.

As an Arab Journalist, I’ve Received My Fair Share of Racial Slurs

The worst part of it all was the silence, including my own. It felt like I was the one swinging the sword on my neck when I didn’t report the white writing professor who told me, “Profanity is fine, just no plans to bomb the place.” Or when I just sat there as a white editor assigned a white peer a story profiling Muslim athletes. Or when I held my tongue when a white philosophy professor called my people “backward enemies of civilization.”

It all built up slowly. My silence gathered enough moss, enough shame, to reduce me to worse than a colonizer and worse than an Uncle Tom. I became a swampling, an abomination, there to serve something worse than the white supremacy I abhor: its imagination.

Enough was enough. But like the beginning, a series of moments is how it ended.

Not long into my master’s program in the belly of the beast, the nation’s capital, one of my stories was spiked. It was about Palestinians in the area but the professor told me, “It isn’t local enough.”

I brushed it off, silent again and slowly boiling. Besides, arbitration is the name of the game so I continued my silence all while facing a rising heat. One day, the program director, after noticing how unenthused I’ve been, playfully asked, “What’s wrong? You’re a reporter, get to reporting.”

“No,” they replied. “In here you’re a reporter, and you’re gonna fake it till you make it.”

I didn’t know what was more insulting, policing someone into adopting a mantra devoid of morality, or believing in one that maintains the order where the fraudulent must either feign sincerity or suppress it. This is when it hit me: We people-of-color journalists weren’t being welcomed to the table. We were being trained as house slaves.

“”
The worst part of it all was the silence, including my own.

Academia Perpetuates Racism in the Media

I wasn’t silent anymore. I started fighting back. Later that academic year, I had a foreign policy and media class where we would learn how the two fields interacted. (As if a Muslim Arab didn’t already know.) The professor, however, kept applauding my “peculiar sense of humor” and egged it on, reminding me to stick to it when my contributions were too much of a “polemic discontent for neo-conservatism.”

This is the same professor who, when I grew a bit quieter after the pandemic hit, sent me emails saying he missed my sense of humor. Funny, because whenever I spoke the only person laughing was him. Old man Zeus chuckling away at students who dared to confront him and his “Wuhan virus” anti-Chinese tirades or his insistence that the world was shaped by chaos and not power dynamics.

Really funny, considering how Zeus believed Chaos was a primordial void, and how Zeus ultimately enslaved the Titan Chaos.

I was a one-man-minstrel-show for Professor Zeus. And if I tried not to be, I was an uppity sand negro.

Nonetheless, as much as I still can’t believe it, Zeus wasn’t the worst. What happened next was.

“”
I was alone and I mostly still am.

After seeking the guidance of some friends, who all urged me to be transparent and confront this demon of a degree (a degree that would soon be stamped on my resume where my banana allergy would fare better), I called for help. I contacted another professor, a person of color who’d previously opened up about their own career mishaps, and I let it all out. I explained my woes, in more detail than I do here.

Their words—their only words—were, “You knew what you signed up for.”

There was no rage. No mouth-to-floor shock. No subtle “fuck you” to the professor either. I was alone and I mostly still am. I’m not coming down from the mountaintop with a revelation that aims to save all. If anything I’m climbing up to one. Up to the pantheon, I climb. There’s no other place to go.

And there, the Titans will live and roam again.