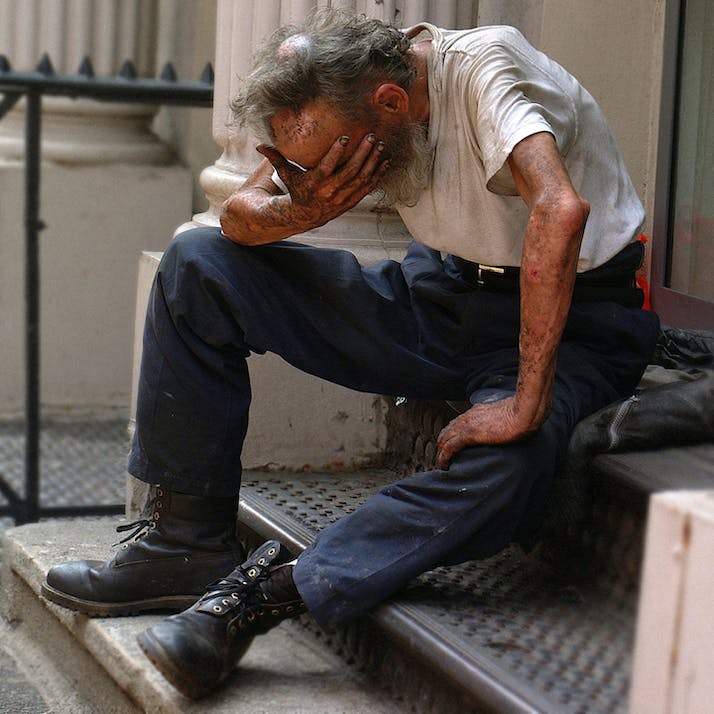 The strangest thing about living in New York City is the frequency with which you see people suffering in public. There's nothing like walking out of a coffee shop where a small cappuccino with regular milk costs $7 and coming cheek to cheek with someone defecating in the street between parked cars because the restrooms in this city are for customers only. It's not a rare occurrence— sidewalks and subway stations are littered with turds that are too large to have come from any dog. Pay special attention to where you step during sandal weather.

A few months ago, I was on the J train, coming home from drinks at a friend’s apartment in the Financial District. I got on the train and had the car completely to myself. Typically, this would be a nightmare scenario for me—one is the loneliest and most vulnerable number, especially on the subway at 1 a.m. I decided to hold my breath and cross my fingers that either no one else would get on my car for the rest of the journey or that a lot of people would all get on at once.

“”
Most likely, this subway car was his bedroom for the night.

Unhoused People Are People Too

Instead, only one person got on at the next stop, the worst possible outcome. It was a man, maybe my age or a few years older, wearing a green puffer jacket and cargo pants. He was carrying a small backpack and, at first, he didn't see me. He looked around the car with satisfaction, but when our eyes locked, both of our faces fell. I lowered my gaze, taking in the stains on his clothing for the first time, the broken zipper on his jacket. He was wearing sandals with socks in winter. Most likely, this subway car was his bedroom for the night.

The doors closed behind him, and he wearily grabbed the nearest subway pole for support as the train pulled off.

“Hey,” I volunteered, “Do you want me to move to another car so you can have some privacy?”

His curly hair wanted a wash and stood straight up from his head. He didn't have a mask on, so I could see his whole face.

“I’m not crazy, by the way. Just homeless,” he smiled wryly, finally choosing a seat opposite me to rest on.

“OK,” I chuckled awkwardly. “Let me know if you change your mind.”

There's something really intimate about seeing another person in deep sleep. Not just nodding off during class or a meeting but laid out flat, doing those little subconscious sleep twitches that people do when they're dreaming. It's amazing how much a grown man's hands can look like a baby's hands, balled up into fists and tucked under his chin in slumber. Except that his hands were caked in grime from days without access to running water. It's even more amazing that someone can find such deep sleep under the watch of 10 to 40 strangers while the train screeches around corners and shudders and rattles between stops. Seeing someone in deep sleep should be a privilege reserved for the people who love them, and witnessing such intimacy makes me feel shame.

“”
I wonder where everyone has gone.

As the subway rumbles along the elevated track during rush hour, a man slips into the space between cars and relieves himself onto the sidewalk 15 feet below. Make sure to carry an umbrella.

Subway rules are similar to elevator rules. You’re intolerably close to people you don’t know (near enough to count individual eyelashes and smell their laundry detergent), so logically, we all pretend that those other people aren’t there. It’s the only way to keep things civil, until someone clears his throat, steps into the middle of the car and gets ready to ask for money. His hands are covered in small cuts halfway scabbed over. Silently, all eyes (including mine) snap to a phone, a book, a hangnail, preparing to deflect pleas for help from someone who really needs it.

We all stood there, tightfisted and packed in cheek to jowl as he made his appeal. There was no place to go if the purse snatching policy went into effect immediately. I hated every second. I hated myself and the $5 still sitting in my wallet as he got off the train empty handed.

The city of New York has recently rolled out initiatives aimed at reducing the number of unhoused people taking shelter in the subway system, and I have personally observed a decrease in the number of unhoused people living on certain subway lines. The decrease is worrying to me because the city has only planned to build 500 individual housing units as a part of the effort. I imagine there are many more than 500 unhoused people in New York City. I wonder where everyone has gone. Every so often, I used to catch glimpses of green-jacket guy in subway stations around the Lower East Side. Lately, I haven't seen him.