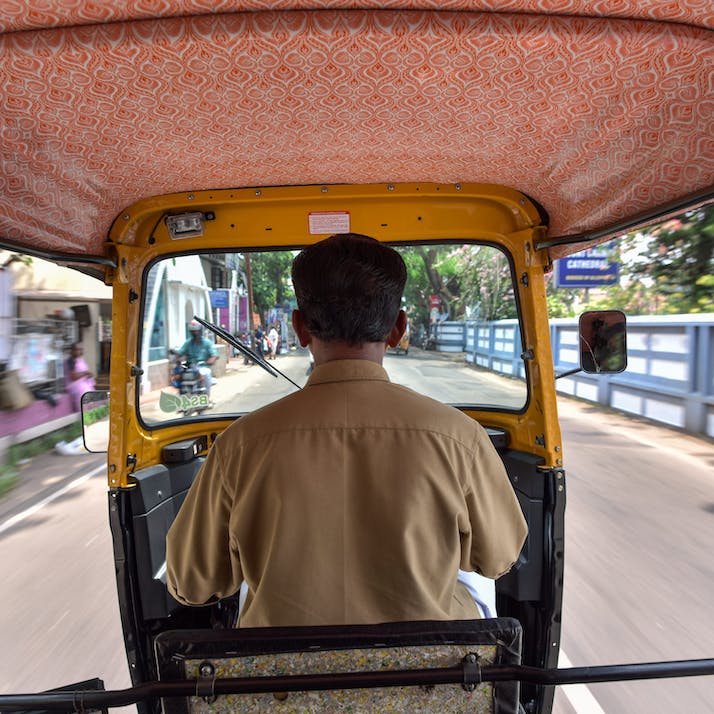 On a trip to Jaipur, an American traveler encounters a selfless rickshaw driver.

He was a man easily missed in a crowd. But he stood alone, outside the airport in Jaipur, India, with a gentle confidence that I would grow to trust more than instinct over the coming days. He was a stranger, but he approached us—me and my husband—at two in the morning like we had been reunited from a long time apart.

Without our response, he eased the backpack off my shoulder and burdened the weight onto his.

As a stranger left with my life’s belongings, I should have worried. Yet the way Sunny moved—more sway than determination—was comforting. He led us from the airport to an abandoned parking lot. He packed us into his blue and red tuk-tuk and closed the shallow door on my side. Taking a seat at the helm, he adjusted the mirror so we had a cinematic view of his charming brown eyes and high cheekbone smile.

“First time in India?” he asked.

“Yes, yes it is,” I said, trying to focus on anything but the echo of the word "India," 3,000 miles away from my bed. There was a silver statue of a Hindu God on his dashboard and nothing else. Not even dust.

“Are you from Jaipur?” I asked.

Arriving at our hostel, he handed us a piece of paper with his number. He told us to call him in the morning when we wanted to see Jaipur. No sale, no pitch, just his digits.

In part, I was sold by his smile. But in truth, it was because I liked how genuine he seemed. We called him the next day and he drove us around the Pink City. He was working, but there was a pride that beamed from him as he made stops. We would return to the tuk-tuk from a fort tour and he would be in jovial conversation with other drivers sipping chai, a smooth grin under his mustache. He anticipated our needs and eased us into the strangeness of India, taking us to clean places to eat and making recommendations. He treated us with delicacy as foreigners, but he did so without undermining his humility, greeting everyone with equal affection.

“”
In part, I was sold by his smile. But in truth, it was because I liked how genuine he seemed.

I Traveled Outside of My Comfort Zone, and Into His

On the second day with Sunny, he invited us for dinner with his family as a celebration of the Hindu holiday. He drove us out of town, where the scenery didn’t fade in color, but in life and light. He turned off the six-lane highway and parked the tuk-tuk next to his family’s fleet of four others. A dozen kids were playing in the side street kicking a ball barefooted under an absent street lamp. A few men came to greet Sunny, including his cousin Raj. They all wanted to see who had come from beyond the neighborhood. Sunny had shown us palaces and shops to buy exotic spices, but he had shielded us from everyday life. We followed Sunny down a muddy alleyway, feeling the discomfort that came with the turn of day in an unfamiliar place.

When I entered the house behind Sunny, I didn’t cross through a door, but an open archway. I left my sandals inside by the single stove on the ground. Two women were cooking a meal of homemade chapatis and green vegetable curry under an open roof. In the house, there were three spaces divided by curtains and illuminated by a single lightbulb: a kitchen, a bedroom with a raised surface to sleep, and a matted area big enough for four adults to sit in a circle knee to knee. There was no toilet.

The air didn’t shift as I moved. India had kept its promise of relentless heat even in the setting season after dusk. But in the house, the dirt was soft and the walls were dry. We moved around the women to file into the back room. Sunny apologized for the absence of air-conditioning as he sat and leaned so the bump of his belly stressed the lower buttons of his shirt. I assured him of my comfort as the sweat beads fell from my neck. I wondered how many blue button-up shirts Sunny had or if it was the same one he had been wearing for two days. Raj came in from the alley and sat in the circle. Sunny straightened his posture and pulled out a cigarette to hand to Raj as a reflex.

The women prepared plates, enough for four, and served them to us without a word. I hadn’t known the women were fasting for the holiday until Sunny explained they would eat at midnight. I felt the pang of hunger in my gut move to guilt for having burdened them with cooking a meal they couldn’t eat, but the energy between the walls was tender and generous. The women smiled at Sunny as they placed food on the floor and left. Between bites, Raj talked of his profession, folding over anecdotes of his abilities to speak with the Hindu Gods. Sunny was transfixed and agreed with Raj’s every word. I doubted Raj had magic powers and his stories were overzealous, but I believed in Sunny.

Leaving Jaipur Was Like Breaking a Cycle of Kindness

I had felt at ease hearing Sunny’s soft voice assuring “no worries,” or in calling me brother. I trusted the warmth in his brown eyes as he looked to Raj with a love that could be seen even in the shadows. He had shown us his India—his family, his way of life—and spent his time trying to make our experience more than a set of sites. He had repeatedly refused gratuity, and instead insisted we join him for a meal with his family. Believing in Raj’s powers, however momentary, appeared more sincere to Sunny than any other token of thanks. So after dinner, I sat alone with Raj in the dark for a palm reading. I assured him the secrets that had arisen would be kept as a sister—not as I was, a stranger, who had missed the big red arrow toward civilization and instead followed a humble tuk-tuk driver to the outskirts of Jaipur. I was out of place amongst the air, filled with souring fruit and manure.

Yet, this was a place where Sunny raised his kids. A place where his wife and sister would lift their veils after we left. Five of them would huddle in one bed, and turn in for some sleep before Sunny headed back out into the late hours of the night to find a fare. This was a place that Sunny called home and where he was never ashamed to call it so when we visited. A place where he offered us a meal while his family ate nothing.

It was a strange thing to leave Jaipur the next day, as though we were breaking a cycle of kindness Sunny perpetuated in every aspect of his life. While in India, I was held by skepticism, always decoding niceness from strangers. But now, a year later, I think about Sunny and his family. Every few weeks he sends a roughly written message in English over Facebook. I know he’s gone out of his way to find somewhere with Wi-Fi to send his words. I know he’s dictating the message to his son to type, as Sunny can’t read or write, in his language or mine. There’s nothing for him to gain in all this trouble of staying in touch, unless the return is simply that—to stay in touch.

Sunny never wanted to make a sale—of himself, his ways, his culture or his beliefs. Nor did he shade others who did, something I hadn’t understood was unique to Sunny and not the traditions of India or Hinduism. His unmasked genuineness challenged my understanding of kindness as someone from America. Sunny showed me how the less you had the more you yearned to give.

I’m humbled by the misplaced letters of Sunny’s messages—notes of concern for my family during COVID—or, most recently, a picture of his newborn niece. They’re notes I would send to someone close, to people I’d known for years. I had known Sunny for a collective few hours yet our exchanges flow comfortably like friends. Whether he had known from the beginning, when he had said hello and taken my bag upon his shoulder, Sunny’s compassion and blind kindness have imparted his presence in my life, happily and forever.