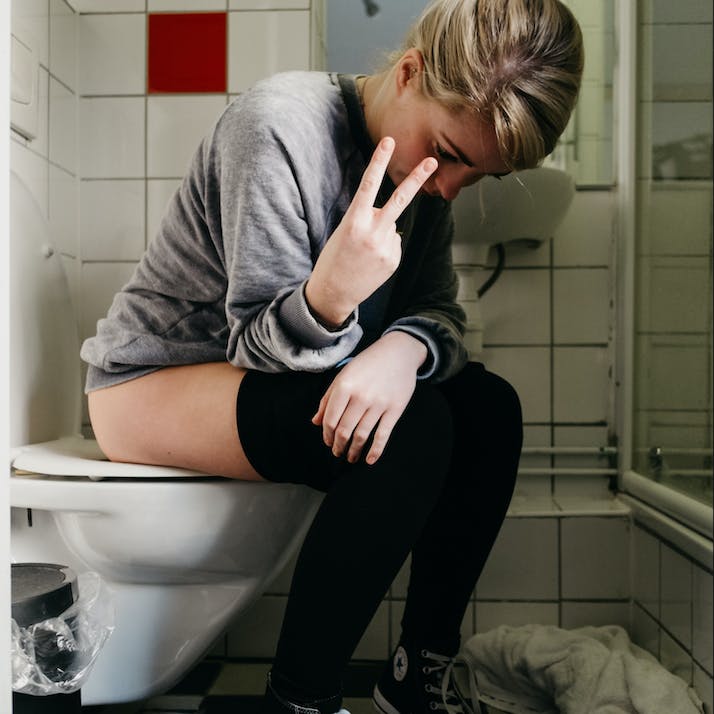 My Poop Horror Story: How I Hid a Turd From My Boyfriend

My friends, family and strangers see me as the face of feminism—but it was a face that couldn’t admit to certain things.

A few weeks ago, I was on a run. I don't know if you've ever heard of the running shits, but they're a real thing. A very real thing. At the time, I was adamant that I didn't want to defecate in a porta-potty and I was pretty certain I could make it home. Well, by the time I got home, I somehow didn't have to poop anymore. But I wasn’t constipated. I was home for an hour and a half. I showered. I fiddled around on the computer. Still nothing.

I left for my boyfriend’s to get lunch and the minute I got there, then—then!—I have to defecate. We got to the restaurant and it was such a hole-in-the-wall, I couldn’t see a bathroom anywhere. I told myself: I can conquer this. People have overcome much more dire circumstances. Plus, as the gnarliest of poops often are, I didn’t know if I was going to shit myself one minute or walk off poop-free into the sunset the next.

“”
This was a poop that I couldn’t clench away if my life depended on it.

A Number One Turned Into a Number Two

We got back to his house, and I had some time to kill before I went to the school where I volunteered, so I went inside. Then, I need to go to the bathroom. But I didn’t have to poop. I just had to pee because I ordered my Thai food medium-plus heat and, therefore, I drank four glasses of water and a Thai tea. I went immediately for the bathroom, confident because who cares if someone—even a woman—pees?

Then I sat down.

And, man, this wasn’t just a pee. This was a poop that I couldn’t clench away if my life depended on it.

I nearly hyperventilated, but then I thought: Fuck you patriarchy! Women poop too! So I tried to poop in peace and pride. Well, maybe not pride, but at least not embarrassment. I stood up and flushed the toilet. I washed my hands. The confidence I felt just fifteen seconds prior dissipated, probably suffocated by the fumes of this stinky poo I just took.

How to Flush Floating Poop (You Don’t)

I looked back down at the toilet before leaving the bathroom, and the water was just circulating: my poops like little boats being sucked into a whirlpool.

Jesus! Sweet, sweet Jesus! Do I deserve this? I waited for the whirling to stop and flushed again. There it went. This is going to be fine, I thought to myself, but then the whirling stopped for the second time and one poop remained. I realized that I really had no other option but to flush a third time.

I wondered if he could hear my flushes from the living room. I had flashbacks to being a kid, my brother running out of a restaurant bathroom, announcing to my parents' that he just had to double-flush his poop. I remember the way people stared and the way my dad made fun of him.

Third flush completed, and this one single poop would not go down. I cursed the stars. I cursed 1960s plumbing. I cursed this world we inhabit in which I could be best friends with my boyfriend but not in the way that it was okay for me to tell him about the massive, shitty problem I had in there.

If this sounds familiar, it probably is. Many of us have been there. Unfortunately.

So then I did what I would like to have believed I could make it through an entire life never doing: I took some toilet paper, reached into the toilet and pulled my own feces from my boyfriend's toilet. I wrapped it in more and more toilet paper, trying to conspire some exit strategy for myself and that single shit. I looked in the mirror, breathed in deeply, sucked my stomach in, and stuffed this slightly-wet, TP-wrapped turd down my own pants.

“”
I cursed this world we inhabit in which I could be best friends with my boyfriend but not in the way that it was okay for me to tell him about the massive, shitty problem I had in there.

I beelined for the front door, and it appeared that he was not in the living room after all. Sweet, sweet grace! I could explain leaving without saying goodbye to him later, and I could spend the afternoon praying he didn’t go in his bathroom anytime in those following twenty minutes.

My hand was on the doorknob when I heard him say, "No kiss?"

I turned to see him walking toward me. Then, before I could manipulate the situation, my boyfriend was kissing me whilst my own wet turd slowly soaked through half a roll of his toilet paper, and into my jeans. I pulled back and blurted, "Don't go in the bathroom!" He looked at me and before his expression could sear itself into my memory I bolted out the front door.

My feces now lie, unraveling from soggy toilet paper, somewhere in the 1200 block of South Ingalls.

My pride? Probably somewhere around there too.