Police Brutality Against Blacks Is a Myth 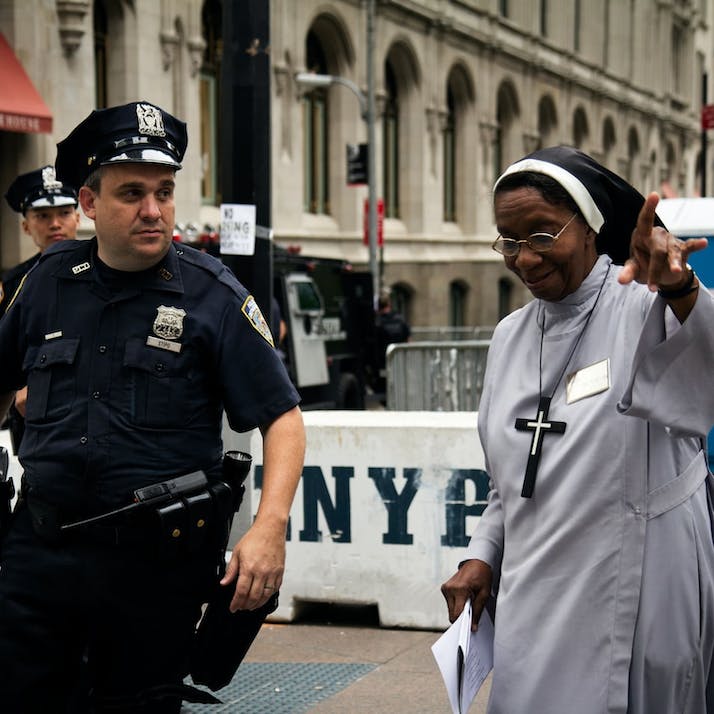 Police Brutality Against Blacks Is a Myth

A black man writes that the recent rallies against law enforcement are inherently flawed.

Editor's Note: Some of our readers have highlighted that the narrative below lacks the personal anecdotes that are a trademark of The Doe. They are correct. We also understand that some of the language that follows is quite confrontational and not conducive for fostering civil discourse. We still believe it is worthy of publishing: We want our readers to understand that controversial opinions (like the ones stated here) do exist and that awareness is crucial to understanding and confronting your own biases. We've heard your feedback, we will learn from this experience and we vow to do better. Please always feel free to reach out with any questions or concerns: [email protected].

Your protest is bullshit.

The burning and looting that’s currently going on in our great nation, carried out by you dumbass liberal progressives, is only making life harder for the same blacks you claim to be helping. You’re not fighting for freedom and you sure as hell aren’t helping the situation—no matter how good you feel when you come home from virtue signaling at the local “march for equality.”

Police make more than ten million arrests annually: One cop kills a black man and, in an instant, “The sky is falling!” “The country is burning” and America’s “race problem” is back at the forefront of all media and communication.

This must be an election year.

An innocent black man has a greater chance of being struck by lightning than being innocently murdered by the police. I know that’s not what the lamestream media has deceived you to believe, but the police aren’t hunting and killing black men. If anything, it’s quite the opposite. Police officers are 18.5 times more likely to be killed by a black male than an unarmed black male is to be killed by a police officer.

Even if police across the country completely ended lethal force right now, this would have a negligible impact on the black death by homicide rate. This, of course, is because the vast majority of blacks are murdered by other blacks, not the cops.

In 2016, between January and July, over 2,300 people were shot in Chicago. The overwhelming majority were black. In that same period of time, Chicago police shot 12 people, all deemed armed and dangerous.

That’s one half of one percent of all shootings.

“”
Your protest is bullshit.

Statistical Evidence Says This Is No Epidemic

I, a black man, will go through the facts to prove that a systemic problem of police brutality on black people is not only untrue but tremendously detrimental to all who foolishly believe it. The narrative regarding the prevalence of police brutality against black men in the U.S. is largely perpetuated by the media and race hustlers like Al Sharpton and messy Jesse Jackson in an effort to keep blacks down.

The only reason liberal Democrat politicians are allowing the looting that we’re witnessing in 2020 is because of the soft bigotry of low expectations, which says blacks are not to be held to the basic standards of civil society. Lesser, inferior, impulsive, rogue, feral, “super predators, to be healed,” as Hillary said. If whites held blacks to the same standards as they do the rest of society, crime would plummet, black wages would rise and blacks would be able to fully function and participate, not just spectate, in the greatest nation God has ever created.

A Harvard study showed that black men and women are treated differently in the hands of law enforcement. They are more likely to be touched, handcuffed, pushed to the ground and pepper-sprayed by a police officer. All occur probably at a higher frequency among blacks because they resist arrest at a higher rate than others. But the study had oddly surprising findings when it came to police shootings using lethal force.  “It is the most surprising result of my career,” said to Roland G. Fryer Jr., Harvard’s youngest black tenured professor.

The professor of economics at Harvard examined more than 1,000 shootings in ten major police departments. The results shattered the image of police brutality that many Americans held at the time. “You know, protesting is not my thing,” Fryer Jr. said. “But data is my thing. So I decided that I was going to collect a bunch of data and try to understand what really is going on when it comes to racial differences in police use of force.” In shootings involving officers, cops were more likely to shoot their weapons—without having first been attacked—when the suspect was white. Black and white civilians involved in police shootings were equally likely to have been carrying a weapon. Both results undercut the idea of racial bias in police use of lethal force. There is zero evidence of racial bias in police shootings, Fryer Jr. concluded. In fact, blacks were 24 percent less likely than whites to be shot by officers even if the suspects were armed or violent. Federal crime statistics reveal that 12 percent of white and Hispanic homicide victims are killed by cops, compared to only four percent amongst blacks.

Last year just 14 unarmed black men, out of a population of more than 20 million, were killed by the police. The year before, the number was 36. These figures are likely close to the number of black men struck by lightning in a given year—considering that happens to about 300 Americans annually and black men are seven percent of the population. (And they include cases where the shooting was justified, even if the person killed was unarmed.)

Of course, police killings are not the result of a force of nature and I’m not claiming these are morally equivalent: The comparison illustrates that these killings are incredibly rare, and that it’s completely misleading to talk about an “epidemic” of them.

But blacks are routinely and disproportionately being stopped, pulled over and/or arrested due to police misconduct, right?

“”
If whites held blacks to the same standards as they do the rest of society, crime would plummet.

The Only Solution Is Self-Respect

I am an individual: a man whose skin happens to be black. I did nothing to earn this immutable trait and in it I feel no pride.

When dealing with black issues, it’s of utmost importance that the reader understands that black Americans suffer from chronically low self-esteem. Often thinking of our features as ugly or that our complexion a curse, blacks often are taught that lighter skin and straighter hair is more desirable than the nappy hair and tanned skin of our birth.

Take Michael Jackson: At the height of his career, and a point at which many in retrospect believe was his most natural and handsome, the most successful star on Earth goes out and fucks himself up with numerous disfiguring surgeries and skin bleaching treatments. This is the epitome of low black self-esteem!

You're dealing with a fatalistic mindset hellbent on “getting rich or die trying,” as the demigod 50 Cent espouses. Said fatalism is clearly expressed in song: Beyoncé glorifies promiscuity amongst the group with the highest STD rate.

Rappers promote and condone violence, creating a general consensus that viscously and violently is the way to resolve all issues. And, yet, these rappers claim to be just “keepin’ it real” and “rapping about what I see.”

So this is the music of oppression? You’re an oppressed people? That’s odd because when I hear Jay-Z, Lil Wayne or 50, all I’m hearing is niggas bragging about how much money they got. I couldn’t feel the suffering when you're telling me about your place in Paris that you just flew to in your very own $65 million private jet. My bad, I really don’t want to listen to your shit.

The fact is, these bullshit rappers, just like so many black men who get thrown into cuffs or tased, often act tough, resist arrest and curse the officer out. Then, once they’re on the ground getting their ass kicked, they start crying like little bitches.

It’s time for you niggas to man up!

Face reality and go out there and be as successful as you want to be. The only barriers to your success are between your ears. Stop blaming others for problems only you can solve yourself.

“”
Whites are vulnerable to being disarmed of moral authority by being called a racist.

White guilt for America’s racist past is the fuel that drives this vehicle of racial self-destruction. White guilt is the terror of being seen as a bigot or racist. It now pervades American life, social policy and culture. Everything is touched by this anxiety in white America, understandably, given America’s history.

Whites are vulnerable to being disarmed of moral authority by being called a racist. It’s now being used as a weapon, to attack whites and frame them as such. Therefore, whites find themselves in no position of authority to be in any way critical of what blacks do. All of the power of the American left is based on that guilt, that susceptibility, that terror of being seen as racist.

Politicians know this all too well. Hillary Clinton and her now-famous deplorable statement is a perfect example of saying, “Trump supporters are bigots and racists. If you vote for me, you prove your innocence. I offer you an identity of innocence.” Being liberal is more of an identity than a political stance. It’s the way they think of themselves, as a decent civilized human being—those other people are contemptible, irredeemable and deplorable.

That becomes black power, gifted by white guilt. They’re virtually one in the same. That’s why we now have an entire generation of black leaders who do one thing, and one thing only: Milk white guilt.

You’ll never hear people talk about an epidemic of lightning strikes and claim they are afraid to go outside because of it. Thus, there’s no reason for blacks to fear our great police.