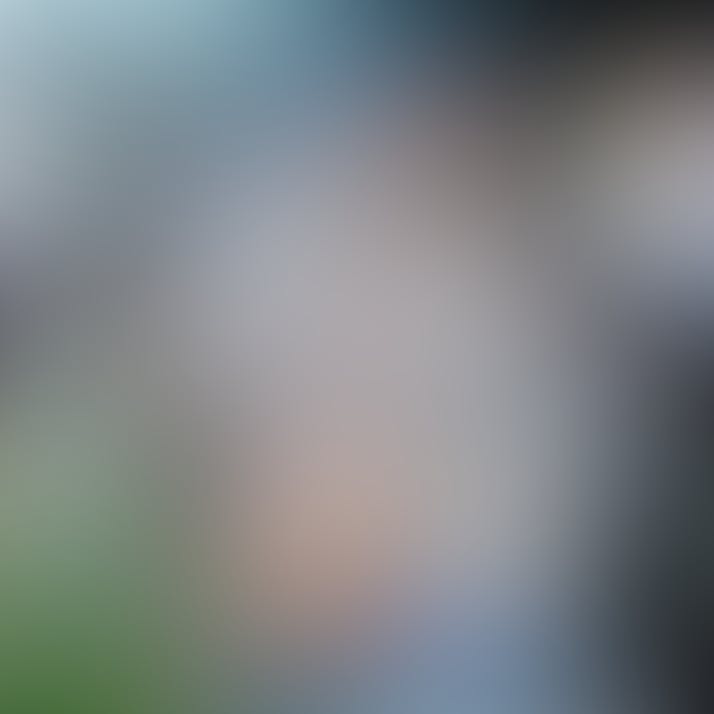 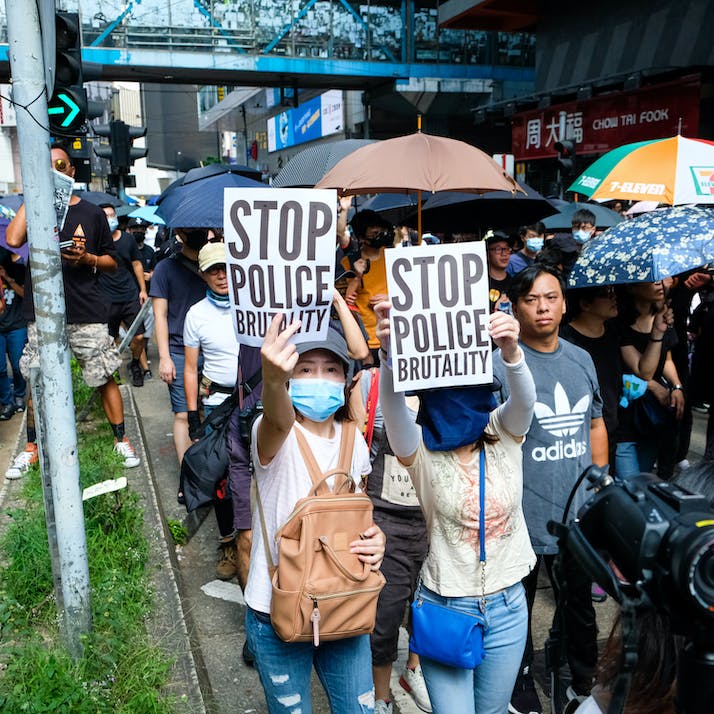 The People vs. the Red Hand of China: Documenting the Hong Kong Protests

What it was like being a photojournalist during last year’s tumult.

From the middle of the street, I put my camera down and saw that the guns hadn’t been magnified through my lens after all. They really were as close as they seemed—far too close to feel any sense of comfort. But Hong Kong hadn’t felt comfortable for quite some time now.

I moved closer, despite my partner’s pleas to be careful. He stayed back a block while I followed the crowd. From my vantage point, I could see dozens of police officers staking out high ground on the walkways overhead, their water cannons and gas canisters at the ready for the incoming wall of protestors that I had found myself at the front of.

The police were suited up like it was a battle against an evenly matched opponent. They looked ready to draw blood if they had to, ready to watch unarmed people squirm in the streets after they released gas canisters deep into the crowd. They’d brought the hammer down on innocent citizens before. I’d seen them beat people senseless in the street, watched them laugh alongside the pro-China triad gremlins who chased journalists and protesters around Hong Kong with machetes. The national police had turned away from the people during all of these acts and they weren’t hiding it. In the midst of all the civil unrest, they changed the force’s official motto from “Pride and Care” to “Vow to Serve with Honor, Duty and Loyalty.” The men and women wielding the guns were no longer people of Hong Kong, but loyal, dangerous puppets of the Chinese Communist Party.

Over 250,000 people marched that September Saturday afternoon. We journalists had been informed about the protest through a private WhatsApp group—it became clear that it wasn’t a secret. The people organizing it were brave just for putting the word out. To be caught at the head of this uprising was to risk being arrested and loaded onto a train headed across the Chinese border and into a black zone.

There was no telling what would happen, but the marches needed to take place. The people were growing restless with China moving in, sabotaging their elections and silencing any whisper of pro-democracy discussion. The people of Hong Kong were fighting for their autonomy and organizing at tremendous risk. The youth were fighting for their futures and their lives. It only felt right to risk my own freedom and use a weapon that many of them did not have: the media.

As a Photojournalist, I Knew I Had to See the Hong Kong Protests Firsthand

Back home, I was pissed off that the Hong Kong crisis was covered as a few short segments mixed in with the world updates. People were being silenced, kidnapped and murdered for their beliefs, as day by day, their way of life was crushed by the red hand of China. I knew that people back home glossed over news stories. They skipped words to get to the pictures and videos, then made snap judgments like villainizing protestors when the demonstrations turned violent.

I was tired of people not asking why. I had a camera, a good eye and a few contacts in Hong Kong, so I bought a ticket to see it for myself.

I had to do something.

That Saturday afternoon, I found myself at the front of the march as the mass of bodies moved onto the freeway, bringing traffic to a stall with a gentle insistence, directing oncoming cars and buses to turn around and find alternate routes. Commuters waved and smiled. A bus driver parked diagonally across the highway to block traffic. There was an energy in the air that was supportive and strangely uplifting, a camaraderie that I hadn’t expected to find—especially when the news I had seen focused so much on violence.

It was unreal how determined and proud these young protestors were—as they should have been. Their words and actions grabbed people from all corners of the city, drawing people young and old from the neighborhoods and through the financial district. Old people strolled with young children. Groups of teenagers waved Hong Kong flags. Restaurants offered free food to marchers and individuals handed out water as thousands of feet moved through the city, their voices echoing up the glass walls of the skyscrapers. I found myself swept up among the people, shouting alongside them: Free Hong Kong! Five demands! Not one less!

The fist I raised in the air was covered in goosebumps. The noise around me was growing louder. I realized that I couldn’t stay objective in this story. Not after all I’d heard in the after-hours at the FCC journalists’ club and in interviews with people on the street from both sides—countless stories of police officers raping women in jail who had been arrested for protesting, children in school uniform arrested while walking to school. I couldn’t stay neutral after police raided the Prince Edward subway station, gassing families on their commute home. I couldn’t be objective because there was clearly an enemy and the fight had become personal: It was an attack on truth. The CCP continued trying to suppress what was happening.

I feared they were going to make Hong Kong into another Tiananmen Square.

“”
People were being silenced, kidnapped and murdered for their beliefs, as day by day, their way of life was crushed by the red hand of China.

Protesters Were on a Collision Course With Police Violence, but They Came Prepared

I moved through the crowd with a new rage as I noticed how ordinary the people around me were. They’d been painted as villains in China’s national news and misrepresented by foreign eyes who didn’t have the whole story or were clearly biased towards China. These were the people, who just a week before, had united in protest to hold hands in a 27-mile-long human chain around the entire city. The movement felt like it was heading toward a head-on battle with a grossly overpowered force that many of us as journalists feared would win in the end. Taking photos of the everyday people marching felt more important because of it.

I was going to do everything I could to get their story out there.

A story told through photos, something quick and real that could be turned over and magnified to raise international support for Hong Kong. I lingered on a sign that read, “Watch us fall. You will be next.” This was a global fight that had been left in the hands of just a few to win.

I pushed ahead in the crowd to look for the front-liners. I’d seen their photos in the media and in the protest’s WhatsApp group. Their trademarks were their all-black outfits and the umbrellas they used to deflect the water cannons and tear gas, and block police vans from moving into the crowds. They were vigilantes who were featured on animated posters everywhere in the city. I found them and walked, positioning by body and camera in the rapidly closing gap between democracy and oppression.

The first gas canister flew over my head and landed 50 yards away. The front-liners were quick to cover it with a traffic cone and duct tape the top so that the smoke couldn't escape. My heart was racing as I watched the crowd shift. The more vulnerable marchers moved to the back, while more front-liners moved up to fortify their positions. Then more canisters came. I could hear the clink of metal against concrete and the hiss of toxic gas streaming out. My eyes began to sting behind my goggles. I lowered my camera just for a moment and felt the most exposed I’d ever felt in my entire life. My hi-vis vest, gas mask and press badge were like a huge red target painted on my back. The water cannons started up and I could hear the streams spraying hard against the pavement. The water was dyed blue so the police could identify protesters later and arrest them, pulling up in broad daylight to throw them in the backs of vans with barred windows.

I didn’t want to, but I found my feet backing up and away from the conflict. I had to—my fight was in the photos and in making sure that I didn’t get arrested before they got out. I left the front-liners and ran to find my partner. Word was coming in from other journalists that the police were surrounding the streets, trying to corral the people into their traps like mice. We followed a small group of protestors running down an alleyway who had said they knew a way out. We found the first inconspicuous place we could to strip off all of our identifying press gear. We transformed into civilians and watched from a restaurant window as the police barricaded the end of the road we had just come from. We missed the blockade by minutes.

We got out, which I hadn’t expected to be such a worry when I first arrived in Hong Kong. It wasn’t that I was naive, it’s just different when a gun or a baton or a bloodstain are right in front of you—and not framed in a photograph. All of the conversations I’d had, all of the kind gestures I’d seen and received from so many people, all of the injustices that I had witnessed, all became real. But those memories would die with me if I couldn’t get my photos and their story out to the world. I had taken on the responsibility of telling the truth, which many locals had thanked me for with free food, drink and taxi rides. The kindness of the people and their love for their city was weak when stood up against the Chinese machine. It was a hard truth that all I could do was document while the CCP closed in on the freedom of press to report on the situation.

I bought a ticket home and left Hong Kong the Tuesday after the march, burying my flash drive deep in my backpack and making sure my computer and camera were clean. I left carrying a hope that documenting firsthand the words and actions I witnessed could make a difference.

But we know now that it wasn’t enough.