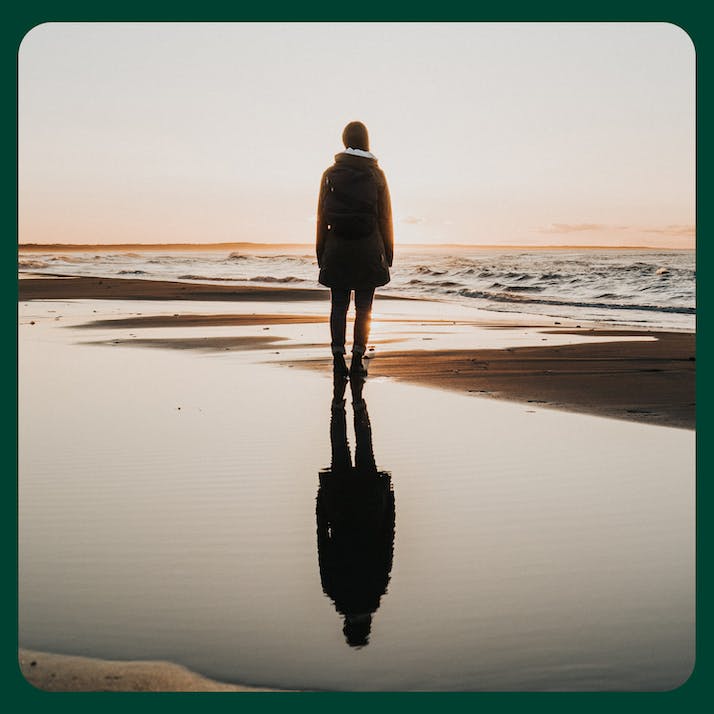 My Past Life Regression Journey: How It Affected My Christianity

After seeing a familiar photo of a WWI pilot, I went down a rabbit hole of research and hypnotherapy, and discovered we shared some strange, deep connections.

On New Year's Eve 1985, my husband surprised me with dinner at a new, World War I-themed restaurant about an hour's drive from our home. When we pulled into the crowded parking lot near an airport runway, I spotted two rusty, canvas-covered trucks that were actual surplus vehicles from WWI. A slight breeze ruffled their shredded fabric tops, the exposed bars groaning as if in protest of the passing of time.

After entering the building, it took my eyes a moment to adjust to the dimly lit foyer of the old farmhouse that had been converted into a restaurant. It was named after pilot Eddie Rickenbacker's famous flight group, the 94th Aero Squadron. Musty, wood-paneled walls were decorated with relics from the era: yellowed maps of Germany, France, and England; propellers, saucer-like helmets, faded flight rosters on a corkboard; and the black and white photos of pilots who served in the Royal Air Force during 1917.

From the rafters hung the torn wings from a French Nieuport biplane, in addition to rusty railroad lanterns, gas masks and a dented bugle. A staticky recording of George Cohan's "Over There" drifted from the speakers near a battered Tin Lizzie. Behind the car was a wall covered in old liberty bonds and American recruiting posters.

The Moment That Spurred My Past Life Regression Experience

The hostess seated us at an intimate table next to a large, plate glass window that faced the executive airport. Tiny blue lights near the landing strip glowed in the darkness to guide the incoming Cessnas on the runway. People were laughing and filling their champagne glasses all around us in anticipation of ringing in the new year. I scanned the menu for a moment before a strange, buzzing sound filled my ears. I glance up to see a man in uniform staring back at me.

Everything stopped at that moment. The noise around me disappeared, swallowed by the sound of my heart knocking hard against my chest. I knew the man in the photograph—the dark, arched eyebrows, thick lower lip and the creases that bracketed his mouth. His penetrating gaze under hooded eyelids. I knew it all too well.

But I'd never met the man.

I thought of Richard Collier's reaction when he first saw Elise McKenna's photo in the 1980 romantic drama, "Somewhere In Time," and assumed it was my writer's imagination that caused the odd tingling at the base of my neck. But when I closed my eyes, I saw a burst of flame, heard the low drone of an engine whining in my ears and smelled the pungent odor of petroleum stinging my nostrils.

"Are you okay?" my husband asked as he put his menu aside and studied my face. "You look like you've seen a ghost."

"I think I have," I laughed. We joked about the photo and went on with our New Year's Eve celebration, but when we returned home, I couldn't get the pilot's intense gaze out of my mind.

That night I dreamt of flying over makeshift trenches that gutted fields of mud and blood. Bullets whizzed past my wings as I frantically grabbed the control stick, pressing the blip switch with my thumb until I felt myself falling into a blur of blinding light.

I woke up on bedsheets damp with sweat and knew I had to go back to the restaurant.

“”
James died on the same day I was born.

After My Dream, I Was Committed to Finding Out the Pilot’s Identity

Two weeks after purchasing the mysterious photograph, I was no closer to finding out the pilot's identity. This was long before we had access to the internet, so my research consisted mostly of trips to the library. I flipped through dozens of WWI books, pausing on the old photos of pilots until, one day, the hair rose again on the back of my neck.

I found a picture of a pilot standing beside a biplane that had taken a nosedive into the ground. I recognized his dimpled smile and the familiar arched brows under a woolen cap that he wore at a jaunty angle over his short-cropped hair. The caption read simply, "James Allen Joseph, Royal Flying Corps, 1917." (In order to protect his identity, James Allen Joseph is a pseudonym.)

I immediately mailed inquiries about the pilot to the military archives of numerous museums across the U.S. When the first thick manilla envelope arrived from the Smithsonian, I anxiously tore it open and scanned the papers. I was surprised to read that James shared my father's birth date in July (although 31 years earlier).

But it was his death date that made my heart lurch and tears sting my eyes.

James died on the same day I was born, just thirteen hours before my mother delivered me unexpectedly two weeks early.

My Past Life Experience Mirrored My Own in So Many Ways

The similarities didn't stop there. During WWII, James worked at the same airforce base where my uncle was training to pilot. More than likely, the two would have met on the base. And in a strange twist of fate, my uncle died from a sinus infection while James was at that base. When I was born years after his death, my parents honored his memory by giving me his middle name.

I was also surprised to discover that James had a son who died in an aviation accident, precisely 47 years earlier on the same date that I had a miscarriage.

Before this experience, I never believed in past lives; it went against my Christian upbringing. But there was no denying how much James's life eerily paralleled my own. We were both Presbyterians raised by business tycoons who were strict authoritarians and, at times, verbally abusive. Like me, James constantly sought his father's approval and started a writing career by publishing small articles in magazines until his first book publication—the same career path I chose. When it came to reading and writing, we both preferred humor.

There were further similarities in our personalities: we were both stubborn, controlling, energetic, anxious, yet extraordinarily organized and highly efficient. We even shared the nervous habit of biting our cuticles until they bled.

James loved hosting parties and was known for his creativity behind the bar. It is a passion we share—I've always been interested in mixology and enjoy nothing more than hosting parties. I smiled when I read of his fondness for waffles and eggnog, which are two of my favorite foods. And stranger still, his best friend during the war shares the same name as my husband.

After everything I learned about James, the only thing that didn't match up was his love for flying, since I have had an irrational fear of it since childhood. My parents loved to travel and scoffed at my anxiety, which meant I spent much of my youth traveling with a bag over my nose and mouth.

Eventually, I Decided to Try Past Life Regression Therapy

I read everything I could find on James, and after I'd exhausted all of my resources, I did something I never thought I'd consider: I visited a psychic. Several, in fact. Back then, I thought of psychics as charlatans. Still, their knowledge and predictions during my readings with them were jarringly accurate. Without any prompting, every psychic I visited envisioned an entity that fit James's description.

I left those meetings more confused than enlightened. I was raised to believe that psychics and past life exploration were considered a demonic influence. My research went against everything I'd learned in the Christian church—that karmic retribution and reincarnation did not align with the theory of Christ dying for our sins.

After confiding in a friend about my experience, she contacted a hypnotherapist she knew from California who agreed to work with me. I spent several hypnotherapy sessions with him learning how to relax and open my mind.

But it was during the third session that things took a turn.

Under hypnosis, I was looking down at James's lifeless body on a bed. I knew his soul had left and I felt a heaviness in my chest until suddenly I was being whisked through a long, drafty corridor. I stood at the end and shielded my eyes from a blinding, bright light. An engine roared to life, the sound coming from a plane, a newer WWII model that I didn't recognize. James stood beside it, a clipboard in his hands. He was chatting with another man who I was certain was my uncle.

The therapists asked what I was wearing while standing in the tunnel, but all I could see were low-heeled shoes and the hem of a dress. Tears rushed to my eyes. I lifted my arms and yelled, "He's leaving!" Once the therapist realized I was distressed, he woke me from hypnosis.

Staring at the clear blue sky outside my window, I was filled with a profound sense of calm.

My Experience Was Enlightening as Both a Human and a Christian

We shared several more sessions that week, but neither the therapist nor I were any closer to answers regarding the mystery of James Allen Joseph. We had several theories: a past life, a guardian angel, memory transference, or possibly soul recognition while passing simultaneously between realms. And there was always the possibility that it was all part of an active writer's imagination. But my gut told me differently. James and I were somehow connected. However, I had to accept that the answers might not be forthcoming until I passed from this life.

Despite my fear of flying, there was one last thing I needed to do before I could let go of James. I arranged to fly with a pilot in a biplane over the ocean on my birthday. Speeding down the runway, I was terrified at first, but the moment we climbed up to the sky, I felt the sun on my face and my fear turned into exhilaration. For that brief moment in time, I knew the freedom James experienced when he soared the skies in his Sopwith Camel.

I no longer need proof that we are inexplicably intertwined. I have faith in God's plan. For that reason, I'm grateful for discovering James and for my spiritual adventure into past life regression. It has changed my perspective on traditional Christian beliefs and, in many ways, has brought me closer to God.

I don't struggle in the stifling confines of my religious upbringing and can now freely embrace a dual belief system. Yes, Christ died on the cross for our sins, but there are also karmic lessons in the universe that need to be taught—sometimes repeatedly—until we get it right the next time around.