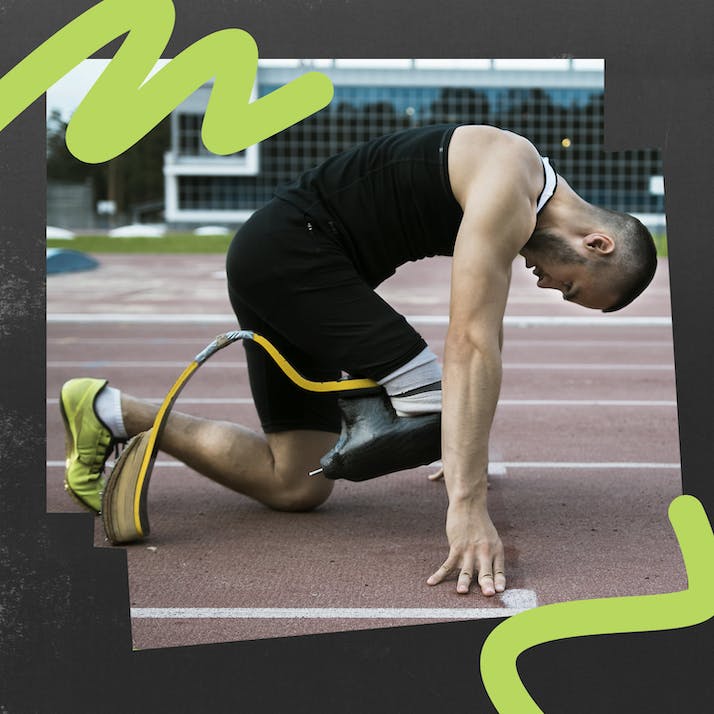 After qualifying and training to represent Australia in the triathlon, COVID-19 pushed back the paralympics and forced me to take stock of myself.

In 2008, I narrowly missed out on the Beijing Paralympic Games in equestrian. I would soon go on to represent Australia at several international equestrian events, including the World Equestrian Games (WEG) in 2010. This all took place at a time when I was completing a Master's degree in psychology, as well caring for my mother, who was dying of breast cancer and electing not to undergo any form of Western medicine in her fight to survive. Her tumor grew from pea size to the length of her torso—from the collarbone down to the bottom of her rib cage. It’s an image that will haunt me forever.

The only equestrian event I would compete at without my mother, my wingman and best friend, was the biggest event of my equestrian career, the WEG. My horse tragically suffered significant stress on the 72-hour flight to the event, which became life-threatening. At the same time, my mom had flown herself to Mexico for alternative treatment. Traveling solo to Tijuana, I spent several nights sleeping next to her in a hospital bed, scared for her and my own life. Frail and weak, I managed to fly my mom back home to Australia, which would become the setting for some of my most memorable and traumatic memories to date.

Three months later, she passed, leaving me grieving, traumatized and with no structure or guidance in my world. My dream of the Paralympics was now nowhere in sight. My depression and anxiety had me housebound at times, suppressing my emotions through alcohol, partying and the warmth of conversations with friends and strangers. It was a spiral of moods and an unhealthy lifestyle.

My all-around self-loathing became a point of embarrassment and personal disgust. I tended to my thoughts and feelings by trying to understand them better rather than living by their control. It took conscious awareness of my pain and sadness, and allowed myself to understand what made me happy, to understand my own identity. I missed the drive, the goal-setting, the challenge and the natural euphoria of competition.

I Competed in the Paralympics for Australia in 2016

An invite to consider triathlon back in 2008, while at the Australian Institute of Sport, reignited my dreams of representing the country at the Paralympics. It was a long shot, but I decided to start. With guidance, support and pure grit and determination, I went on to win bronze at my first world championship. With a mix of pure hunger and heartache for a dream yet to be achieved, I felt I owed myself and Mom the opportunity to try to qualify. Ultimately, I became one of the first Australian triathletes to compete at the Paralympics for the competition's debut in Rio in 2016, after less than two years in the sport. I finished in the top five, and although I did not achieve my performance goals and capability on race day, I finally achieved my dream. I had learned that the path least planned can often be the actual path. I went on to race for Australia with several international wins.

In 2017, I went on maternity leave and gave birth to a baby boy. I returned to training four months later and became the first Australian to return to elite world triathlon racing six months after giving birth. Traveling with a baby, breastfeeding and racing internationally throughout 2019, the road to Tokyo 2020 was alive and well. It was a huge balancing act between motherhood and elite athlete life, but I was at my best physically and mentally leading up to Tokyo, with my best race to date six months from the Games.

This was my Games. For me. No one else.

Securing a spot for Australia and meeting all the criteria towards team selection, I had a burning hunger to really show my capability on the world stage this time around. I was ready to finish an amazing chapter of my life and retire from competing at the elite level. With the bags almost packed and the family ready to set off to Europe for the final few months of “no guts, no glory” training, I knew this would be the Games of a lifetime. Was it ever.

The Pandemic Forced Me to Reflect on My Career

A few months away from achieving my goals and ending a fulfilling career as an athlete, COVID-19 hit.

Losing the Games meant having to face an early retirement. It meant no competing and taking on financial strains. It meant another year of training at an elite level into 2021. It meant weighing plans to bring another baby into the world now, at 37 years old, and risk dealing with the personal impact of not “completing” this chapter of my life.

The pandemic revealed so many repressed emotions and struggles, especially from my earlier years and times of adversity and turmoil. I thought about my body image and anorexia as a young teenager and dealt with anxiety, depression, grief and identity loss. But on a very powerful and positive side, with time, COVID-19 also gave me the space to reflect.

The postponement of the Games put me in a lonely place, one that was hard for others to comprehend. I tried to explain that I couldn’t just simply accept what I had done already in my sport as enough. I was driven by what I still had left to achieve. I thought about it being taken from me—not due to injury, or choice, but due to being a female and hitting the peak-end of (less risk) child-bearing years. I thought about the impact sports can have on an athlete’s family, and the significant financial strain that Paralympic sports bring. I had no choice but to do the work, to dig deep and reflect, realizing that I had never been content with what I had already achieved. And I had achieved so much, across two sports.

But I only saw gold as a success, and I was vying for that moment in time in Tokyo. I had worked so hard physically and mentally to for that one race. The virus-forced lockdown was the setting for learning to accept myself instead of what was missing, to let go of the desire to seek constant approval from others through achievement. But it was really for my own approval. I soon started to realize that even if I did choose to train for Tokyo, it might not have filled the void and sense of self-worth that I had always believed. Would the sacrifice justify the risk of not being able to get pregnant again? Would sports outweigh that potential reality? It may seem like an easy decision to the reader, but being an athlete is unique, requiring constant mental training to consistently push each day, all for that big event: the Games.

“”
I have learned that acceptance rather than resentment allows me to develop different but acutely powerful senses to adapt.

The Challenges in my Life Have Developed Me as a Person

I have so much in my world to be grateful for, even as I struggle to be happy with who I am. But what is it that keeps me unsettled? What is it about athletes that we struggle to live in a world without sports? Is it the lack of challenge, the lack of structure? Is it the adversity and inner struggles that can bring to the surface the tangible effects of one’s mental health? I am still only learning I am enough without being the elite athlete, which I will always hold so close to my heart.

I have learned that acceptance rather than resentment allows me to develop different but acutely powerful senses to adapt. Even though it doesn't always feel that way, I am realizing that constraints in life are a good thing, especially if we can accept them and let them direct us. They push us to places and develop skills that we'd otherwise never have pursued.