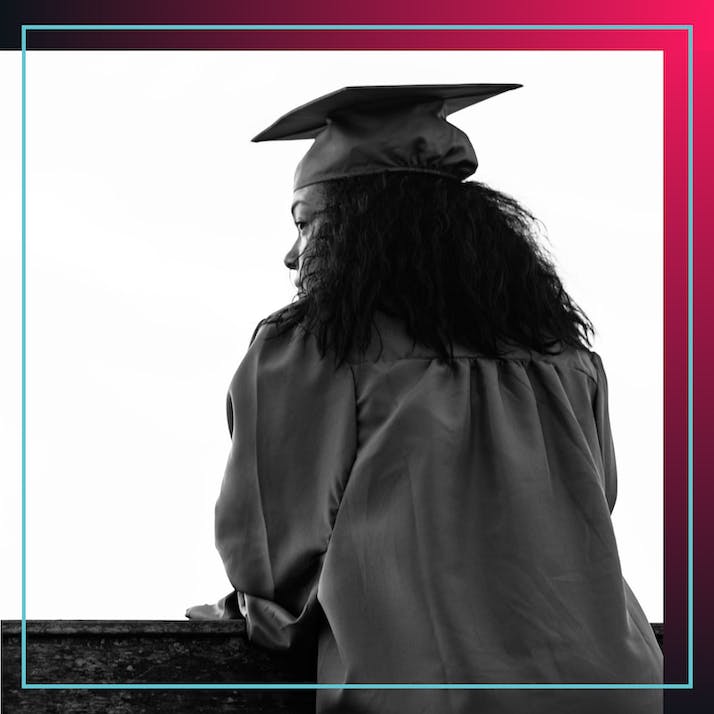 Nostalgia Kept Me From Processing My High School Trauma

I had nothing but happy memories of my teen years—until reconnecting with classmates made me admit the truth.

At my majority-white high school, all the Black girls knew we were on thin ice. The moment we stepped onto campus, it was obvious that there was a ladder, and we were at the bottom of it. This was true in every way: In class, it was assumed that we were only there to fill a quota and that we weren’t as smart as the other kids—which wasn’t helped by the fact that most of us came from lower-income backgrounds and were unprepared by our public middle schools. When it came to relationships, forget about it. We knew who the “pretty” girls were, and they weren’t us. And all the coveted leadership positions were taken up by a string of preppy kids straight out of an L.L. Bean catalog.

From almost our first moments on campus, we banded together because it was clear that no one would reach out to us first. It was funny (almost), so we laughed about the social hierarchy and vented to each other. But overall we acquiesced to how things were and braced ourselves for the next four years. I’d attended private, predominantly white institutions my whole life, so I thought I knew how it would all go: some eye-rolls, some microaggressions, but nothing I couldn’t handle. What I didn’t know was how dire it would get and how the “grin and bear it” attitude I adopted to protect me would wind up hurting me instead.

“”
We did what we could to handle it, but we quickly learned there’s only so much we could take.

I Expected a Hard Time—but Not This Hard

At first, things went exactly as we expected: the racist microaggressions from our peers, the constant undermining, our low social standing. We did what we could to handle it, but we quickly learned there’s only so much we could take. Eventually, it went beyond being undermined, and we started to actually believe the things everyone around us thought. Because it wasn’t just the other students who were doing us harm, but the whole structure of the school, which, as it became painfully clear, had no interest in supporting us.

Our faith in ourselves dwindled. I knew that I had earned my place at school, having been valedictorian of my middle school and scoring higher on standardized tests than many of my friends, but I started to believe that I was less valid for being there than my peers. The structure of the school seemed to confirm it. Resources seemed hard to access, and there were barely any Black role models. While many of my white peers struck up close relationships with teachers, there were almost no Black faculty I could relate to or ask for advice. And the lack of prominent Black figures reaffirmed to me that the school was not set up to celebrate and support me.

The main gap in the support system was the lack of mental health support for Black people. I knew most of my white peers went to therapists at home, took medication or went to the school’s counselors, but none of that felt accessible to me. My few interactions with the therapy department in meetings or group sessions were resoundingly negative—one of the few times I tried to advocate for myself as a Black woman, the head counselor shut me down instantly and gaslighted me for speaking up. Message received. With no Black therapists and no one paying attention to us, it was easy for the Black girls to fall between the cracks.

This became abundantly clear with the first suicide attempt. It was the spring of my freshman year and I was already feeling the weight and loneliness. The only respite was in commiserating with other Black women, so I knew all the (very few) Black girls on campus. When one of them, a junior, left school in the middle of the semester due to “mental health issues,'' it wasn’t long until I found out that she had attempted suicide, alone in her room.

The whole thing was couched in secrecy and shame. The school never addressed it directly, but they went out of their way to remind us of all the mental health resources we had available. Among the Black women, this was almost laughable. And though we were surprised at the news, it made some kind of morbid sense. We knew that girl was struggling, but, from where we saw it, there was nothing that she could have done. Her helplessness was our helplessness.

Since I Couldn't Get the Help I Needed, I Pretended Like I Didn't Need It

The next spring brought another suicide attempt from a Black girl I considered one of my biggest mentors. Again, the school covered it up with secrecy and never addressed the pattern of Black girls crying for help—not even when there was yet another suicide attempt that fall. While a few white students left the school for mental health reasons, the only suicide attempts during my time were by Black women. Despite that obvious pattern, there was still only silence from the administration and therapy department about the lack of mental health access for Black women. Since there was no help coming externally, I decided any change would have to come from inside.

It was a very conscious decision, looking back, to decide to enjoy the rest of my high school experience. It was a month into the first semester of my junior year, shortly after the third and final suicide attempt I would witness during my time. I remember sitting on my bed and having an epiphany: I didn’t want to be miserable, so I wouldn’t be.

Obviously, this was simplistic, but it served as a mantra of sorts for the next two years. There were obviously the same external factors, and also the obstacle of my own mental health issues, but I had spent the previous two years feeling like I was drowning. It was time, I resolved, for a complete mindset change. I was going to “buy into” the school the way my white peers did and start focusing on the good instead of the bad.

I thought hard about the few positive things I had at school and decided to dig deep into them: the wealth of knowledge I had access to, the passionate instructors and the few deep friendships I had made. I would keep my focus on them. And honestly, it worked. My memories of those last two years are a whirlwind of conversations that weren’t just commiserations, late nights making new friends and a deep investment in the things and people I was passionate about.

Even my friends look back and say I had a personality shift those last two years. It was deeply intentional. Though there were low moments and hard times, I accepted them as part of life and tried to move on from them quickly by reaching back into my well of positivity. This was maturity, I thought. It was certainly better than drowning.

Years have passed and overall, it worked. My memories of high school are mostly positive, and I still have deep friendships with many of my peers. There may have been bad times, but I can’t help thinking of only the good when I look back: the unmatched sunsets, the hours spent at the dinner table or laughing up the library, the green grass fields of my youth.

I thought this nostalgic perception was a good thing—wouldn’t I rather love my past than hate it? But then in the summer of 2020, when seemingly everyone was having revelations about racism, I unexpectedly had one of my own. I thought I knew about systematic racism, and I was happy to hear people talking about it, but I didn’t anticipate a learning experience for myself.

When my Black friends started speaking out about their high school experiences, I began to rethink my own attitudes about mine. It wasn’t that I had closed my eyes to the worse aspects of that time, but by tamping them down in my mind, I had minimized their scale. This repression felt good for a while, allowing me the space to focus on more positive things, but it was a form of delusion that hit me full force when I heard what my peers had to say.

They didn’t have the same forced nostalgia that I have. I’d brushed aside microaggressions, like people asking to touch my hair. I’d laughed away their comments calling us “affirmative action cases” (despite being Ivy League legacies with buildings named after them at their colleges of choice). Most of all, I thought I was doing what was best, taking some sort of high road of delusion.

But it was more than just little things. Some talked about feeling so undesired in high school that they have been in a string of abusive relationships since. Some talked about their years of therapy and losing their sense of self after being forced to feel ashamed of their Blackness. Hearing their experiences while uncovering my own traumas and giving myself space to feel them has made me realize that maybe it is time to pull off my rose-tinted glasses.

Some of my peers, who had let themselves feel their pain more fully while we were at school, are better adjusted now and can speak about their experiences more eloquently than I can. Talking to them candidly in a way I had spent so long considering “wallowing” has illuminated the depth of the trauma I had experienced, even when I was smiling and laughing and ostensibly having a good time. By listening to my friends outline how their lives have been continually impacted by the behaviors they adapted to survive in high school, I had another revelation: I hadn’t found some great maturity in my “buy-in” ethos. It was just another way I learned to survive.

Now, realizing that my mentality often caused me to minimize my pain and brush off the bad, I am giving myself space to process the things that I once pushed aside. I’m trying to have a more balanced picture of my life there, one which gives sufficient space to the things that hurt me, while being thankful for the things that I gained.

With distance, I think of high school as a place of extremes. My only choices seemed to be drowning or denial. In trying to reconcile my nostalgic perception of high school with acknowledging my trauma, I’m working to heal and process in a healthy way. There are moments where I still think of high school as a beautiful place filled with laughter and sun and fresh fruit, which yes, at times, it was. But now I’m letting the smoke clear from my less beautiful memories, less joyful days, and I’m willing to admit that it wasn’t always that way.

Nostalgia is good but it won’t help me now.