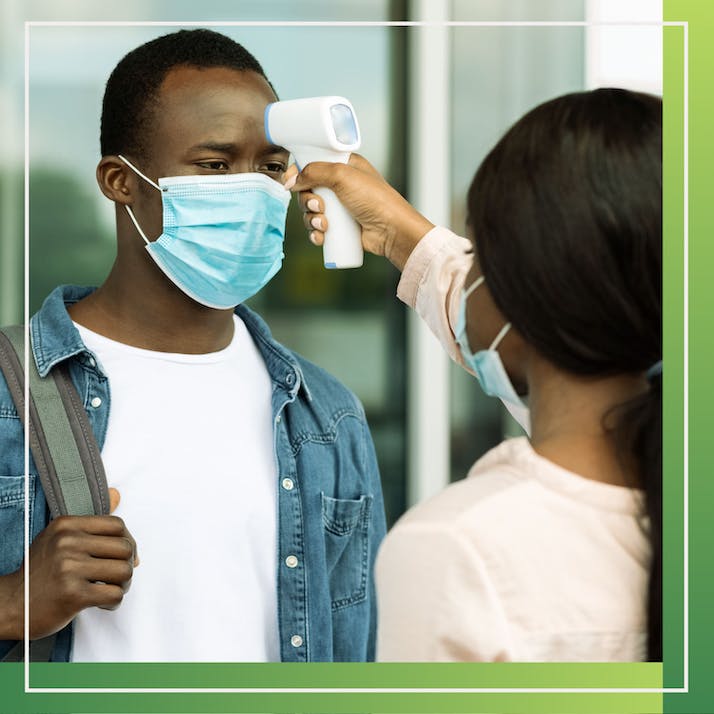 NCAA COVID Testing: What It's Actually Like on the Front Lines

From lost samples to untrained medics, the NCAA’s faulty practices were exponentially exposed throughout the pandemic.

At first, I had no idea how I’d managed to land the job as the most senior on-site manager of COVID-19 testing for all of the student-athletes and athletic staff at a major SEC school. But nothing is more familiar to the wayfaring millennial generalist than taking wild shots on LinkedIn and applying to jobs for which we are massively unqualified. Occasionally, those shots land, and because it is late-stage capitalism, they leave us with a further disillusioned and shredded worldview.

This is one such story. I had no experience in the medical field, but with a somewhat plausible background managing teams and projects across industries, I figured I could do my part and join the war effort. I’d been working from home since March completely solo, losing my mind from isolation, so putting myself on the frontlines of a raging pandemic felt like just the thing to shake things up. I could have never anticipated the gaslit psychosis, the unbridled exploitation and profound sense of powerlessness that lay ahead.

“”
The blind were truly leading the blind on every level of the medical testing side.

Turns Out, Administering COVID Tests for Athletes Isn’t as Simple as It Seems

On its face, the job was simple enough: Test every athlete three times a week to detect the virus early and separate the infected. The reality turned out to be much grimmer, and I left with major doubts that these efforts were for anything but the optics and a fat payday for a few well-positioned companies. We worked 80-plus hour weeks without overtime pay, didn't succeed in preventing the spread in any significant way, and, ultimately, I got chewed up and spit out by one of the USA’s largest COVID-19 testing companies as it raked in major money in this new virus-industrial gold rush without having any real clue what it was doing.

I’ll delve further into the root cause of those feelings—a healthy mixture of unmasked idiots and unprecedented public health responsibilities thrust onto an extraordinarily unprepared (and possibly criminally negligent) medical startup—but the deeper impact of this story is the plight of the athletes and the athletic staff pushed to similar breaking points. Considering the way I felt as a very minor cog in this million-dollar athletic program, one can only imagine their burden.

Cases were spiking, the world was in chaos, but rather than just taking some time off to regroup and get through the worst of it all, the powers that be mandated that, in addition to regularly scheduled practices and games (oh, and classes, of course), players also had to get tested three times a week—or, in the event of a player testing positive, every single day. We had stretches of more than 30 days in a row of testing entire teams and even this wasn’t enough motivation for certain players to think they needed to wear masks as they walked through campus.

Who Knew the NCAA Could Be Even Worse?

It’s well-known that the “powers that be” (ahem, NCAA) has come under fire for raking in huge profits while at the same time prohibiting the athletes that provide its foundation from receiving compensation. My short time inside the machine made me realize this culture of casual exploitation didn’t end with the athletes, but was predictably passed down the line to the overworked coaching and training staffs; to armies of interns more than likely paying the academic institution for the credit to be there; and to the contractors who kept the whole production on the rails. When such an unprecedented challenge as COVID-19 erupts into a system that’s already failing to address glaring inequities, there’s an exponential compounding of problematic oversight that translates to human suffering, and not just the emotional or financial kind.

I saw a number of infected staff members sidelined for weeks fighting serious symptoms but forced to return to work (in my unprofessional medical opinion) way too soon. I saw interns getting paid a flat salary of $1,200 per month working 80-plus hour weeks and bearing the full burden of making sure every player hit their required testing numbers.

In addition to uncapped exploitation on the athletic side, the blind were truly leading the blind on every level of the medical testing side. We were stretched extremely thin and, as a result, tons of mistakes happened in plain sight. People’s samples got switched or just lost entirely. Non-medically-licensed staff members were forced to swab players after medical techs had been sent home. The main rule we broke on a continual basis was using rapid antigen testing in place of PCR tests when we were crunched for time because the team was set to travel. Antigen tests are a lot less sensitive, but since the lab was in a constantly overwhelmed state, this was the easiest way of obtaining a negative result in time to participate.

I was sure my company would send a higher-up to help sort this out, but apparently, that person just didn’t exist within our organization or wasn’t deemed a high enough priority. All we got was a stream of middle managers who would come to observe for a single day, make toothless suggestions and offer platitudes before jetting off to the next school to continue being ineffectual. It was infuriating that these problems didn’t seem to matter and it became evident that we were only going through these motions so that the NCAA could say, “Look, we’re doing everything we possibly can!”

“”
The main rule we broke on a continual basis was using rapid antigen testing in place of PCR tests.

My Experience Raises Questions About COVID Testing in Sports, in General

There was also some shady nepotism. The primary contract holder for all of the SEC’s testing was a prime government contractor with no history of medical testing. Hence they subcontracted this job to my employer—an accredited medical company, sure, but also lacking substantive experience testing at this scale. I don’t know how they obtained the initial contract, or how my company wound up subcontracting, but something really didn’t add up in the equation. I know that we conducted millions or tens of millions of dollars worth of tests in the span of a few months, and all I can say is that I, and better people than myself, got kicked to the curb when we rocked the boat about our horrible labor conditions.

I suppose my experience is pretty typical for the American workforce. Labor rights have continually eroded since the Reagan era and my employment was “at will,” meaning I could be excused at any time without any reason. Coincidentally, it was. I was let go without any warnings or reason given, with a piddling one-week severance. In a way, it was relieving not to be gaslit into thinking I was somehow not a good enough leader because of so many things beyond my control. I just feel a bit shattered and lost for hope having seen the efforts being made to curb this pandemic.

But, hey. Football! Tailgating! The show must go on.