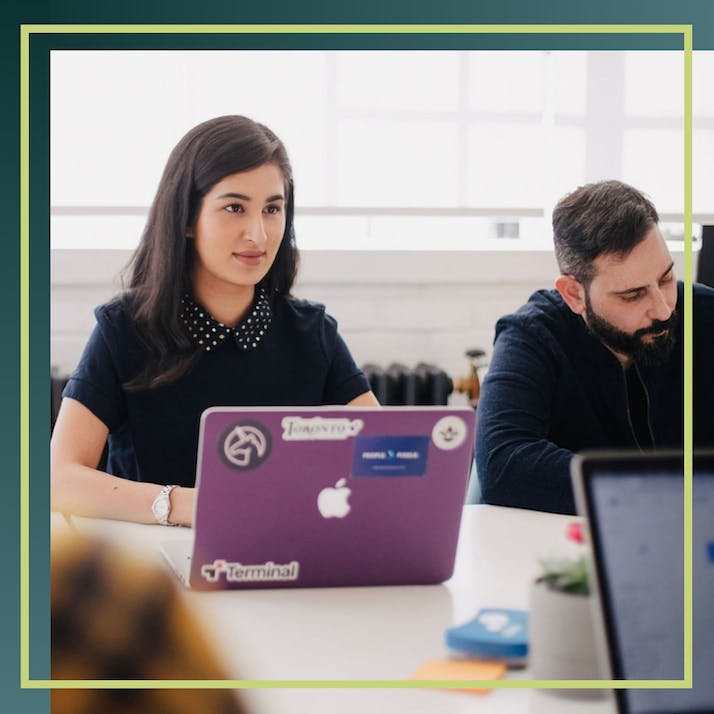 Navigating Sexism in Tech as a Female Startup Founder

Think Silicon Valley is ahead of the curve? Think again.

The laser look of the male gaze is what jettisoned me into the tech world.

My ex-boyfriend's kid brother told me about AngelList, the tech world's equivalent to Monster.com. At the time, I was a 24-year-old, New York City female trope—a self-punishing perfectionist who couldn't pick a healthy relationship out of a lineup if she tried. My then-boyfriend worshipped the ground I walked on and I couldn't stand him for it.

Our relationship's saving grace was his much cooler, smarter and funnier younger brother, a welcome third wheel on our dates. He'd recently graduated from UCLA and had this laissez-faire attitude about everything. All things worked out for Spencer, whose worldview was the magical realism that only white-passing male privilege offers, with dollops of coolhunting and performative feminism for flavor. He was 22, had a trust fund, lived off the Lorimer stop in Brooklyn and was having the time of his life.

Instead of getting a real job (“In publishing, like me!” my boyfriend would say, as I rolled my eyes), Spencer scoped out roles at exciting, quirky startups he’d found on AngelList. He didn't worry that startups had a 99 percent failure rate. He didn't care about job stability, because he planned to quit in a year anyway.

"Wait, listen to this one,” Spencer would say. “They're looking to rent unusual spaces for co-working, basically to have people share offices." Or "I applied to this startup that delivers your laundry to your door every week." Or "… something about data."

When Spencer got the job at the co-working startup, his starting salary sounded generous, even exorbitant—more than I could imagine for myself at 24.

But it planted a seed.

In Tech, Fake It Till You Make It Is a Legit Strategy

When I moved to L.A. a year later, I remembered AngelList and its infinite scroll of lucrative job opportunities. Los Angeles was campaigning to become the new home of California tech. People in the industry were trying to brand it as "Silicon Beach."

Toggling through the filters on AngelList made me realize how grossly under-qualified I was to do pretty much anything in the tech world.

But by lying about my qualifications, I'd unwittingly breached into the tech world. Everyone lies here. No one really knows what they're doing; the numbers are always inflated. Nobody's ever actually qualified for the job they get.

It's called “failing up.”

My fake resume got me in the door. I got hired at a small startup, but because I was the CMO's type—physically. Petite, brunette, young. We remained friends for a while after I left the company. Every few years, usually when I was transitioning into a new role, I'd ask him why he took a chance and hired me. "You were persistent," he'd shrug. "That seemed like a good sign. And you turned out to be a great hire, so I was right."

I'll give him the persistence thing. But the truth? He wanted to sleep with me. He almost kissed me on my second day of work, at a drunken company-sponsored karaoke party in Koreatown. We stood next to each other at the bar, as everyone else wailed the chorus to "Sweet Caroline." He whispered in my ear, drunk on booze paid for by the company card and the ego that I imagine a 29-year-old guy gets when someone hands him a million-dollar check with the vague instructions to "go start a company."

A few years later, he'd tell me that he wanted to take me home that night. We worked together for another year before I quit to join another startup, with yet another male founder with boundary issues.

I thought it was a fluke.

But there was that dull, omnipresent drone of sexism that hummed along in the background as I moved through the tech world. It would change form with every role, and at each startup I worked. As I got savvier, the sexism did, too.

Sometimes it was blatant. Male engineers making jokes about the sizes of women's brains compared to men’s. Gross, leering CEOs who made veiled sexual innuendos during morning meetings about KPIs (“key performance indicators”).

Other times it was silent, therefore so much more insidious. Male employees were grossly overpaid while their female counterparts were shamed for trying to negotiate their dismal paychecks. Despite all this, I never felt like I got held back because of my gender identity. I just felt as if all the men I had worked for were idiots and I’d gotten supremely unlucky in the boss lottery.

“”
The solution is to burn the whole thing down.

My Plan to Escape Sexism in the Tech Industry

My solution to escape the rampant sexism in technology? Start my own company.

I figured part of my problem was that people didn't take me seriously because I was just an employee. If I became a founder (which clearly wasn't that difficult because all those idiots had managed to make it happen), people would respect me. Men would respect me.

You see where this is going, right?

The hard stuff wasn't building and coding a technical product without a computer science background. It wasn't growing my 30,000-person community with zero budget. It wasn't difficult to make money.

Fundraising, though, was a different story. My first investor meeting was with a husband-and-wife couple. I was nervous. It was midsummer and I wore a white wrap dress with nude heels and pink lipstick. Approachable, clean, sweet but not sexual. They'd both started their own companies (the wife pitched me on her protein bar brand during our meeting) and they acted as angel investors for promising female founders. When I mentioned that I really only wanted to raise from women, the female angel investor looked me up and down, eyes hovering at my chest for a moment, and said, "When you look like that, you'd better raise from men."

I realized quickly that the rules would be different than they had been when I was just an employee at a startup. Before, I could wear jeans and no makeup to work. Now, people were looking to invest in me and I had to look the part of a founder. Except that most tech founders are white males with dad bods. Obviously, it was more complicated than just codeswitching. I had to get a whole new costume.

I Tried to Play the Game, but the Misogyny Got to Me

For the next 50 or so meetings that I took with investors, I never again wore a dress. I started a spreadsheet to track what I wore to every meeting. There were rows for Hairstyle, Shoes, Makeup, Lipstick, Outfit, Purse. Over time, I left my notes and highlighted the cells: green for good, red for bad, yellow for unclear. After a lot of trial and error, I found that when I wore a somewhat fashion-forward jumpsuit with my hair pulled back and a face of natural makeup, male and female investors responded more favorably to me. The ensemble said, “I'm hip and asexual, and therefore less threatening to you.”

A male investor once forgot about our meeting for which I'd traveled across the country and confirmed many times. When he showed up 30 minutes late, he proceeded to tell me that I "didn't look like a San Francisco founder," even though I was from L.A., all the while looking at my boobs. He shoveled lunch through his thin lips as I tried to deliver my elevator pitch without seething.

On that same trip, a male investor introduced to me by a friend convinced me to take a second meeting with him at his apartment. (Red flag, but I figured a male would say yes, so I did, too) He reached his hand up my leg while I told him about my growth metrics. I tried to brush it off as an accident but stormed out of his apartment after he groped my chest.

I never thought my B-cups would be so enticing. "Not bad for a six," I'd joke to my friends as we commiserated over wine.

Brushing Sexism Under the Rug Is Not a Solution

I kept fundraising for a few months after the groping incident, but I became more and more disenchanted with the whole experience as I met other investors. For as many who were gross, many were well-intentioned. But even the nice ones had prejudices and personal biases that oozed into our conversations and interactions.

When I first entered the tech world, I was dazzled by the possibilities. I learned that no matter how ill-equipped I seemed to be for a job, as long as I could produce results, I'd earn respect and clout. There was something attractive about the false idea that the tech world operated as a meritocracy.

I saw the problems but figured I could remain loyal to my own values even though the industry in which I was enmeshed didn't hold those same values. It seemed, for a brief moment, that I could maybe help change things from the inside out.

But when we go full double-agent, we risk forgetting what side we're really fighting for. The idea of losing myself, and my values, kept me up at night. I felt that the only way forward was not to break the system from the inside out. It was to reject the system outright. Opt-out and form something new.

I'm grateful for what I learned working for seven years at startups and in the tech world. There's nothing I love more than innovation, data, ideas and people with really bold dreams. But I believe the ecosystem is deeply broken, because it perpetuates oppression at every intersection. The solution is not to create more “Women in Tech” conferences, or to try to set up all-female venture capitalists, or even to invest in more solutions for working moms.

The solution is to burn the whole thing down and start anew.